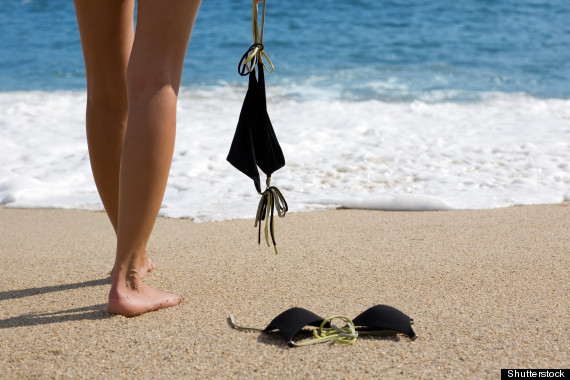 The 2014 Flip Flop Report, an annual study by Expedia examining behavior and preferences among beachgoers in North America, South America, Europe, Asia and Australia/New Zealand reveals what comfort there is with public nudity, what opinions lurk on the topic of speedo-style swimwear and what actual fear there is of sharks near the shoreline. The following shines light on some of this year’s findings.

In the Buff at the Beach

Germans are the likeliest to sunbathe fully nude at the beach. However, Austrians now tie their German peers in that regard. 28% of German and Austrian beachgoers report having spent a day at the beach in the buff. Worldwide, beach nudity is more common among men (18%) than women (6%). And toplessness is a largely European phenomenon, with Austrians (49%), Spaniards (42%) and Germans (39%) the likeliest to take part. 12% was the global average for beach nudity, while 20% of female beachgoers worldwide have spent time topless at a beach. 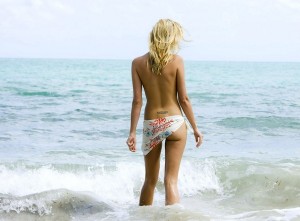 Have Bikini, Will Travel

The beach itself is the most popular travel destination for the world’s travelers. More than one half (56%) of the study’s respondents took a beach vacation in the past year. A full three quarters (75%) of global travelers indicate that they are “very” or “somewhat” likely to take a beach vacation in the next 12 months. Of those who have taken a beach holiday, 62% said they did so outside of their home country, and 59% did so on a different continent.

Beachgoers need no excuse. 79% of those who anticipate taking one will do so “just because.” One subliminal driver may be beachgoers’ association with beach vacations and personal happiness. 73% of those who have taken, or plan to take, a beach vacation report that such holidays are associated with personal bliss either “a great deal” or “a fair amount.”

25% Would Sacrifice a Week’s Salary for More Sand . The report revealed that 29% would “work weekends for a month” in exchange for just one extra beach vacation per year. 25% would give up a week’s salary. 11% would be willing to experience influenza for a full 48 hours.

Spending time in the sand with children made prospective beachgoers most excited (appearing in 51% of the top activities), followed by time with spouse/significant other (46%), sampling local cuisine (44%) and relaxing by the water (40%).

Relaxation over Partying on the Sand

Relaxation is by far the preferred state of being at the beach. 88% of prospective beachgoers report that they will select a serene, calm destination, versus 12% who prefer a “party” destination. At the beach, a stroll along the water is the most popular activity. The list of preferred beach behaviors includes:

At the Beach, Sleep Rules

In fact, sleeping was cited as the top beach indulgence. 46% of global beachgoers cite “sleeping in/napping” as a typical beach indulgence, followed by spending more than normal on food (42%), eating more food than usual (41%), intimacy with a partner (38%) and shopping for things other than clothes (34%).

74% of worldwide respondents consider speedo-style briefs to be acceptable beach attire. A full 95% of Brazilians approve, followed by Austrians (94%), Germans (91%) and Spaniards (91%). Acceptance was lowest among Norwegians, with only 40% approving. 57% of Americans approve of the attire, as do 60% of the Japanese.

While speedos do not make beachgoers anxious, theft does. 68% of respondents say that having their wallet or possessions stolen on the beach makes them “very” or “somewhat” anxious. 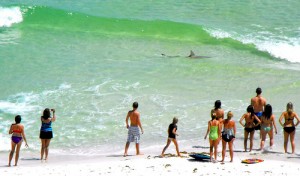 44% of respondents worldwide express selachophobia or fears and anxieties aurrounding sharks, with beachgoers from Brazil (84%), Hong Kong (70%) and Malaysia (70%) expressing the most fear. A full 50% of beachgoers report that they are afraid to swim at the beach due to sharks, though 35% of that group will swim anyway.

Such fears remain a prevailing concern for beachgoers despite the relative rarity of a shark encounter: The University of Florida’s “International Shark Attack File Report” reveals that a mere 72 “unprovoked” shark bite incidents took place in 2013, worldwide.

The 2014 Expedia Flip Flop Report was commissioned by Expedia and conducted online by Northstar, a global research and consulting firm. The study was conducted among 11,165 adults 18 years of age and older, across 24 countries on five continents.

Best Places in the World for Swimming