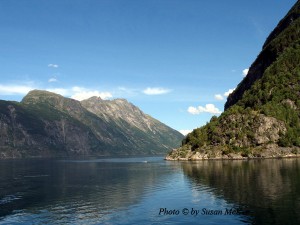 “They tie the children to the cows so they don’t tumble into the fjord.” I looked at the Norwegian guide’s face, but he didn’t seem to be kidding. I looked back at the mountains, with widely scattered farmsteads clinging to steep slopes that started above the tree line and ended somewhere far below in the watery depths. I wondered how the cows kept their footing on such a terrain.

Fjords are the primary draw for tourists who cruise the Norwegian coast. There just aren’t enough ways to say Majestic! Stupendous! Astounding! Everywhere I looked on my summer excursion, no matter where we were on the thousand-mile voyage, the landscape was amazing. 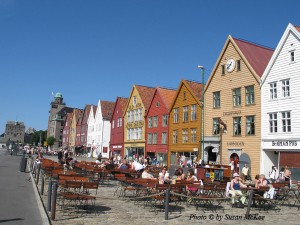 Spectacular sunsets striped in shades of red, orange and gold were reflected in the dusky waters each evening. Rosy fingers of sunlight jabbed between the jagged peaks of the mountains each morning and glinted rainbows off the glaciers.

Sturdy houses staked out their turf on many of the thousands and thousands of islands we passed along our way south to north. We saw enormous tankers heading to harbor from Norway’s vast oil fields, fishermen in small boats and large casting nets. Floats delineating salmon, cod and mussel farms dotted the waters of the fjords.

Towns were few and far between along this rugged coastline, and we stopped at most of them, delivering mail and supplies, ferrying residents from one town to the next, giving nicotine-starved smokers a chance to disembark and light up. In all, the ship docks 34 times on the seven day voyage between Bergen in the southwest of Norway and Kirkenes, the last town before Russia on the northeast. Most of the stops were short, some as brief as 15 minutes, but they took place ‘round the clock.

In the beginning, check-in was somewhat chaotic as 600 passengers were funneled through a single revolving door at dockside in Bergen. Tickets were collected, room keys  issued and baggage tagged for later delivery to the cabin door. Our room keys were also our bar-coded ID cards, and we were lasered in and out every time we hit the gangway.

After selecting dinner table seat assignments, there was plenty of time to wander the ship before we sailed. We were underway so smoothly that I was unaware of the transition until I noticed the dock slipping away.

Bergen, a seafaring town that once was part of the Hanseatic League, retains much of its old world charm. The neighborhood of brightly painted wooden buildings along what was the quay of the medieval town of Bryggen have been designated a UNESCO World Heritage site. There, the German merchants and their apprentices lived and worked, trading the herring, timber, copper, iron ore and furs of Norway and Sweden for the cloth and other manufactured goods from the continent.

My ship had a restaurant and a coffee shop, Internet café, small library/game room and six decks. Cars, trucks, and cargo filled the lower levels. My cabin, which could (theoretically) sleep four, was plenty cozy for one. I was grateful I didn’t have to share the tiny bathroom, but the shower was surprisingly forceful and never ran out of hot water.

As I awoke the first morning, we were entering the Geiranger fjord in brilliant sunshine. On both sides of the ship, I looked up at towering cliffs of dark gray granite that plunged straight into the glacier blue water. They told me the fjords are as deep as the mountains are high above them.

White-painted farmhouses and barns clung to hillsides above tidy orchards of trees laden with ripening cherries, pears and apples, planted in neat rows right down to water’s edge. Cows, sheep and goats grazed the almost vertical grasslands with no children in sight. 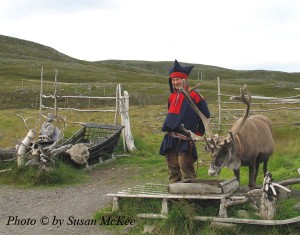 This Nordic country, enriched by late 20th century discoveries of offshore oil reserves, can afford to subsidize these inefficient farms. The only worry recently has been the excessive summer heat. It’s melted much of the snow pack in higher elevations and caused the glaciers to retreat. Many of the waterfalls now dry by August, meaning less water for the streams and rivers used by salmon as their spawning grounds (and fewer spectacular sights for the tourists).

As the ship headed further north, beyond the Arctic Circle, the topmost peaks of the mountains frequently dissolved into the clouds. Trees shrank in stature and towns became smaller, more compact, with their red roofs and tall wooden church spires declaring their existence among the forest along the shore.

A landward jaunt to the North Cape was a reminder of how barren the landscape had become. The views from this almost-the-most-northern point in Europe are all water and sky. On the way back to the ship, we stopped at a shop run by some enterprising Laplanders (now referred to as the Saami people) who obligingly posed for photos in full ethnic dress.

On the seventh day, we reached Kirkenes, where it’s a short flight back to Oslo and the return to the States.

I’d made the mistake of signing up for a shore excursion each day that we stopped at one of the larger towns. It meant that I saw a lot of Norway, but I missed a lot, too. In Tromsø, for example, I was shepherded off to a sled dog encampment. In winter, one could take a dogsled ride through the sparkling snow-covered countryside. In summer, well, we could see pictures of the adventure and pet the dogs. I could have spent the time wandering the town. Inside its strikingly modern and well-equipped public library, for example, was a bank of computer terminals and a collection of English-language books about the region.

At Bodø, I’d signed up for a rubber boat trip. It was pretty tame, but we got a chance to look at the coastal waters up close and personal while the jets of the Norwegian Air Force roared overhead. My guide said that the town had some pretty tense times during the Cold War – that Francis Gary Powers, the U2 pilot on a covert surveillance mission, was taking spy photos of the USSR on a flight from Peshawar, Pakistan, to Bodø when he was famously shot down and captured by the Soviets in 1960.

Coal fish leapt from the water as we chugged along, looking at the Caledonian folded granite and silica rock formations and passing several cod farms. Coal fish, it turned out, were on the menu for dinner on board ship that night.

As we docked at the end of our Bodø jaunt, the boat was mobbed by hundreds of translucent lavender jellyfish, floating and bobbing among the fish in the clear, cold water.

I was glad, though, that I took the city tour of Trondheim. Founded by a Viking king in 997, it had served as Norway’s capital until 1217. Now, it’s the country’s third largest city (after Oslo and Bergen) with about a quarter million living in the metropolitan region.

Nidaros Cathedral, in the center of Trondheim, is a microcosm of Norway’s medieval history. Under the high altar is the spot where Olav Haraldsson was buried following his death in battle in 1030. A small wooden chapel was built on the site shortly after this first Christian King of Norway was declared a saint in 1031. Cathedral construction began about four years later.

Many changes were made to the building over the years. In 1869, a massive restoration campaign began to return the cathedral to its medieval glory. The entire arcaded west front of the building had to be replaced, and the last statue wasn’t put into its niche until 1983.

We had just about an hour in Kirkenes between leaving the ship for the last time and boarding the plane to Oslo. This small northern town is tucked into a little piece of Norway that curves north around Finland and borders Russia. All the signage was in  three languages – an intriguing detail that will have to be explored on my next trip. Fortunately, ships making the slow journey up the coast set off from Bergen every day of the year.

Hurtigruten is a recommended cruise line for fjord-viewing in Norway. To mark their 120th summer, the cruise line is offering special rates for voyages to the Arctic and the Land of the Midnight Sun. Six-day excursions start at $1,326  per person, double, from Kirkenes to Bergen. Cruises lasting 12 days are on the schedule as well. Contact: 866-552-0371. 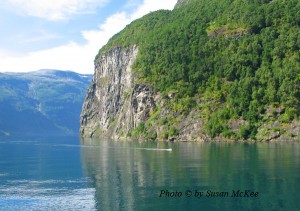