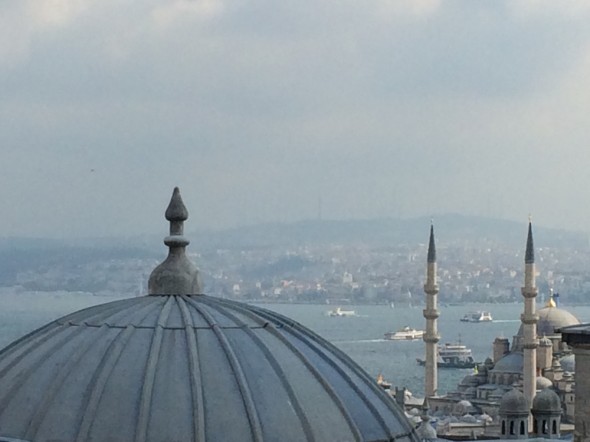 The current political climate is creating fear around travel to such places as Istanbul and that would be a shame given the deep and colorful history to be explored in all its corners. Turkey is an important tourist destination, where Travel & Tourism contributes around 12% of the country’s total GDP. Recent statements from the World Travel & Tourism Council (WTTC) have condemned the attack in Istanbul and others like it over recent weeks but they also stress that tourism is a force for good, and that people should not and will not stop traveling in the face of these isolated incidents around the world.

If it is your first time in Istanbul, make it count. You can have a suite built for a pasha, literally, at the Ciragan Palace Kempinski Istanbul that dates back to 1862 or sleep with the muse of Agatha Christie at the (circa 1892) Pera Palace Hotel Jumeirah. Either way your night will be like none other. It will be steeped in history and, trust me, your dreams will be intense.

A recent week in Istanbul did not produce a city overrun with Syrian refugees nor concern for nefarious characters ready to pick a pocket or find the next political target. Rather, Istanbul swelled, as it always has, with European tourists basking in the Mediterranean climate, glittering with bohemian jewelry and snaking their way through Byzantine churches and Ottoman castles while such things are still possible.

On the margins, the currents of our times pulling and tugging – refugees from the Middle Eastern mess are filling up the deserts on the Southeastern borders. Kurds in the country march for autonomy. A democratic election recently wrangled another five years for the country’s questionably popular president. A bomb goes off in Ankara. It is an age-old story unfolding still. But in Istanbul, this writer’s only thoughts are where to experience a traditional Turkish bath house and whether to buy those pasha pants. 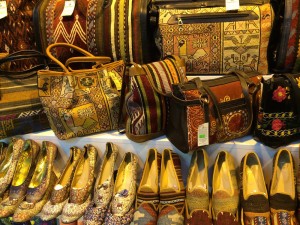 Istanbul is an amazing metropolis of some 14 million people. Its modern streets and throughways wind around the ruins of Roman aqueducts, crumbling crusader fortresses and medieval mosques that still call the people to prayer. A bridge across the Bosporus ensures the city a place on two continents – Europe and Asia – and, at times, the difference between the two is startlingly evident in layout, architecture, businesses and buzz. How to approach a city that is rooted as much in the 4rth century at times as it is to the 21st? Here are some possibilities for the first time visitor.

The history of this city is as long as it is significant and the casual visitor will see layers upon layers of these eras baked into the decomposing palace walls, the ornate cisterns, the great churches and the immense modernization projects in progress since Ottoman times. In a nutshell development of this land dates back to 3000 B.C. and, a bit later, a message from the Oracle at Delphi telling King Byzas where to build his Greek city. Enter the Romans, and then Constantine the Great and Byzantinium became Constantinople and the target of attacks by Persians, Arabs, nomads and crusades. The final assault came with the Ottoman Turks led by Sultann Mehmet II. It was renamed Istanbul and became the nerve center for the Ottoman Empire that stretched through Southeast Europe, Western Asia, the Caucasus, North Africa, and the Horn of Africa.

As independent Turkey was born in 1923, the country’s capital moved to Ankara but Istanbul remains its cultural capital, preserving the old and delivering on the new. 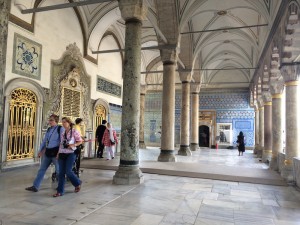 Istanbul: Where to start digging

On any first visit to Istanbul there are a few musts not to miss. These are the Hagia Sophia, the Blue Mosque, Tokapi Palace, Basilica Cisterns, Dolmabahce Palace and the Grand Bazaar. Yes, they are tourist magnets with throngs and lines and groups huddling in a variety of languages but the upshot is the same. The spots are historic, the beauty and preservation magnificent and they contribute to the mosaic of what is Istanbul, no matter what the purpose for visiting.

For cost-efficiency, start with the Istanbul Museum Pass and simply follow the map. The pass costs 85 TL (around $30) and allows easy access to twelve of Istanbul’s most popular museums, without having to endure the long queues.  Purchase the pass through the concierge desk at international hotels. It is valid for 120 hours starting with your first museum visit and offers ancillary discounts at smaller private museums as well as shops around the city. (http://museumpassistanbuldistributor.com).

Tokapi is notable if only for the immensity of it – the castle residence held some 5000 inhabitants attended by 8000 staff in its heyday (1465–1856) and contrary to the 1964 caper starring Melina Mercouri and Peter Ustinov, the jewels are still there – in particular, the Spoonmaker’s Diamond that carries with it a legacy of story and intrigue. Be prepared to spend time at the palace, a good half day to wander through courtyards, museums of all manner of sacred relics, elaborate quarters where concubines spent their time or how cooks prepared meals for a city each day. Don’t miss the relic of Mohammed’s footprint, easily the size of an elephant’s; or what is believed to be Moses’ walking staff.

The surrounds at Hagia Sophia are equally impressive given its survival through nearly 2,000 years of religious and political upheaval. The reconstruction and preservation is ongoing but does not take away from the dizzying vaulting and domes and intricate artwork produced and preserved against all odds.

The Blue Mosque is no less extravagant in tilework – some 20,000 handmade ceramic Iznik tiles that date back to the 1600s complemented by sunlight filtering in through 200 stained glass windows produce a rather angelic setting for the orange prayer carpet used by worshiper throughout the day. Prepare to de-shoe and women need to scarf up upon entrance (one will be provided). Talk in whispers. Use the time to get quiet and feel the peace.

A visit to the Dolmabahce Palace, built in the mid-1800s and home to the last six Ottoman sultans, takes off where Topkapi leaves. In fact, the palace was built as an answer to the older palace’s lack of modern amenities. The three-storied Dolmabahce palace has 285 rooms, 68 toilets, six Turkish Baths, 43 halls and approximately 2.700 windows. It has survived intact with its original decorations, furnishings and appointments and remains filled with paintings and ceiling illustrations by French, Russian and Italian artists.

Perhaps what is below the city is just as intrigiung for its beauty, geometry and history – the Basilica Cistern – considered the Sunken Palace of Istanbul, is the largest of subterranean waterways and was originally a great Basilica. Built beneath the site of Hagia Sophia during the Justianian area, supposedly by the blood and sweat of 7,000 slaves, the caverns provided filtered water to the palaces. Cathedral sized in dimensions and as ornate as such with carved marble columns topped by the heads of angels and characters of myths, it’s a model of ancient engineering and has served as superb background for Bond films, novels and even video games.

Finally, a pass through the Legendary Grand Bazaar and nearby Spice Market will satisfy any chopping list with Turksih Delight candies on it, and various renditions of blue glass evil eye protection charms. These spots are as colorful and aromatic as they are magnetic. While not the best place to purchase a kilim, the local food products, colorful garb, cheap jewelry, even shoes, are a good snag. Beware the more expensive items. Shopkeepers here have packed centuries of experience into helping consumers part with their money. And don’t expect great bargaining power. Rather, enjoy the vaulted architecture, the sense of history (the bazaar dates back to the mid 1400s, although the surroundings now late Ottoman). Have a coffee in the buzzing book bazaar. 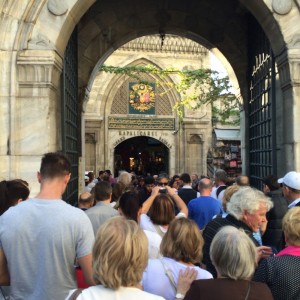 To have a behind the scenes experience of Istanbul and see the city in ways few people can, book a tour through Sea Song, a bespoke tour operation that offers private guiding and can create such unusual moments as an exclusive and private dinner in Topkapi Palace or myriad focused shopping ventures through Istanbul’s ancient bazaars, to antiques and artistic souvenirs in Beyoğlu or the fashion forward boutiques of Nişantaşı filled with the works of up-and-coming Turkish designers.