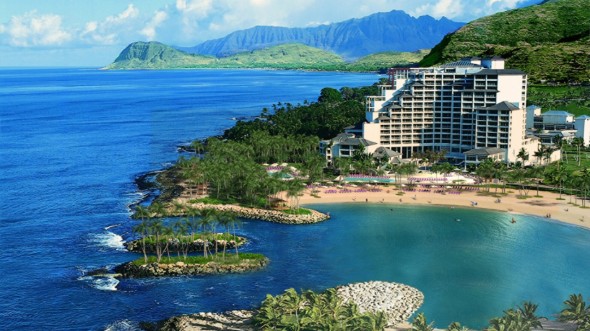 For those vacation-seekers dreaming of new Hawaiian delights, wishes are soon to be granted at the new Four Seasons Resort O‘ahu at Ko Olina on the western, Sunset Coast of Oahu.

Choosing an area once sacred to Hawaiian royals seeking rest and relaxation, the Four Seasons revamped and reconcepted the former JW Marriott Ihilani Resort & Spa at that location and turned those grounds into a precious luxury hideaway with 358 guestrooms, 52 suites and the priceless sunsets they present.

The 17-story spread adjacent to Disney’s Aulani offers quiet and natural beauty along its beaches and five-star pampering to complement.

The new Four Seasons fans out amid four pools, five beaches, five restaurants and an expansive spa and wellness center, all overlooking the mighty Pacific. Adults-only pools or family pools, adult beaches, family beaches: guests can have Hawaii on a platter in a location that is far enough from bustling Waikiki to keep the calm but close enough to take in the sights and shopping.

All of the guestrooms are outfitted with amenities that include the latest technology, including an iPod for every unit, smart TVs enabling guests to easily recast streaming video content from their personal devices, and a soon-to-be-released app that will provide guests with all sorts of on-demand access from their handhelds. Sumptuous guestroom interiors offer authentic Hawaiiana style inspired by nature and featuring traditional local woods and banana-leaf wall coverings – and the new, fully customizable Four Seasons Bed and intuitive lighting system.

The new design by Philpotts Interiors enhances the original building by architect Edward Killingsworth.
The new Four Seasons Resort O’ahu at Ko Olina is set to open in early 2016 and is offering a grand opening package tabbed “Stay Longer: Fourth Night Free.” Rates start at around $447 per night.

As Four Seasons continues to expand its global footprint here are the new properties on the docket for this year and next.

Abu Dhabi, UAE – The first Four Seasons in the Emirati capital will be 200-room Four Seasons Hotel Abu Dhabi at Al Maryah Island, in the heart of the new Central Business District. The striking new building is on a prime stretch of waterfront adjacent to the new ADGM Square complex, home of the new Abu Dhabi Securities Exchange. A retro-modern Chicago steakhouse, a cocktail bar, and a poolside restaurant with sweeping views overlooking the sea are among an array of dining options planned.  The building will also house 124 private and serviced residences.

Bogota, Colombia – The second of two additions to the brand’s South American portfolio, the modern, 64-room Four Seasons Hotel Bogotá will also introduce an exciting new Japanese concept restaurant to a city that is receiving growing international attention as a destination for gourmands. Bogota is also attracting a new generation of cultural explorers interested in its rich history and colorful contemporary art scene, not to mention its 5,200 parks and the surrounding mountains.

Dubai, UAE – Four Seasons entered the UAE with its beachfront resort in Dubai less than a year ago, and will opens its second location in the city next year – this time in the heart of the 100 acre (45 hectare) downtown business district with the 106-room Four Seasons Hotel Dubai International Financial Centre.  An 8th floor sky bar boasting Burj Khalifa views with a cigar room on the mezzanine is among the food and beverage options, while the rooftop pool and garden will provide a welcome oasis in this fast-paced city. Interiors by Tihany Design.

Kuwait City, Kuwait –The first Four Seasons in Kuwait will be the 263-room Four Seasons Hotel Kuwait at Burj Alshaya in the central business district.  An Italian dining concept created around three wood-burning ovens as well as a pan-Asian restaurant – both with outdoor terraces on the penthouse level – will be among five food and beverage options. Interiors by Yabu Pushelberg will include a spectacular indoor pool in the beautifully designed spa and fitness complex.

Kyoto, Japan – The 124-room Four Seasons Hotel Kyoto will be the company’s second destination in Japan, in the city’s historic Higashiyama-ku district, close to the Kyoto National Museum and myriad heritage sites such as the Toyokuni Shrine and Kiyomizu Temple.  Local artists will be featured throughout the traditionally-inspired modern décor characterised by an understated Japanese aesthetic.  The Hotel will have a spa and fitness centre with a pool, and four food and beverage concepts.  There will also be 57 Four Seasons Private Residences.

New York, New York, USA – Located in the heart of Lower Manhattan in the Tribeca district and just a short city stroll from the new World Trade Center, Wall Street and the trendy Soho neighbourhood, the 185-room Four Seasons Hotel New York Downtown joins its renowned sister hotel in Midtown, offering travellers two excellent options in the city.  The Robert AM Stern Architects building with interiors by Yabu Pushelberg will be home to an exclusive spa and fitness facility, naturally-lit event spaces, and soon-to-be-revealed street level restaurant and bar concept, as well as 157 Private Residences.

Surfside, Florida, USA – The exclusive 77-room Four Seasons Hotel The Surf Club revives the celebrated Surf Club in Four Seasons style, and will be the company’s fourth location in the Sunshine State.  The 9-acre (3.6-hectare) complex with 965 feet (300 metres) of Atlantic beachfront will offer more than 40 beach cabanas among landscaped gardens and four pools.  Design architects for the Hotel and 150 Private Residences are Richard Meier & Partners.

Tianjin, China – Underscoring the continued strategic importance of China as both an inbound and outbound travel market, the 259-room Four Seasons Hotel Tianjin will be the brand’s 9th hotel in the country. Part of a mixed complex with an office tower and retail stores, the Hotel is in a pedestrian-friendly area near Nanjing Road, the city’s main east-west thoroughfare and Bingjiang Avenue, the city’s major shopping area.  With three food and beverage options and a spa and fitness facility with a pool, the hotel will be the first Four Seasons in China’s 4th most populous city.