Wi-Fi on cruise ships has long been the topic of jokes, complaints and slow – often very slow and painful – drains on passenger wallets. And even slow and expensive Wi-Fi has been has been a treat until recently as ships suffered unsteady and high priced satellite communications to keep passengers as connected as possible. Often it was easier for passengers to spend portions of valuable port days at foreign Internet cafes in a perpetual effort to connect while on vacation. And, currently, with continuous recording of these journeys and one-upping friends in social media prowess, keeping connected for most travelers is no longer a want. It’s a necessity. 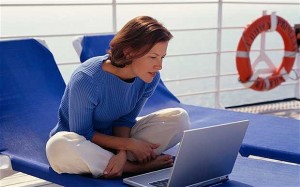 So it is not surprising that cruise companies are taking notice and, now that network providers are becoming more available and affordable, bundling free Wi-Fi into the fare of a cruise journey.

Oceania Cruises announced plans this month to provide complimentary Internet access to guests booked in either a suite or Concierge Level stateroom on any of its five mid-size ships. This is the first time the upper-premium cruise line has offered a free Internet program, and it commences during the 2015 winter season.

Guests booked in Owner’s, Vista and Oceania suites will receive unlimited complimentary Internet access to enjoy throughout their voyage. Guests booked in Penthouse suites or Concierge Level staterooms will receive blocks of complimentary Internet time based on cruise length, starting with 200 minutes for a seven-night cruise and extending to 500 minutes for voyages over 16 nights. The ships feature a larger number of Concierge Level and above accommodations, which means this free Internet program will cover more than 55 percent of all guests sailing on Marina and Riviera, and nearly half of all guests sailing on Regatta, Insignia and Nautica.

The cruise company can add Wi-Fi to its list of complimentary amenities, such as unlimited soft drinks, coffee beverages, juices and bottled water. Guests can also dine in any of the ships’ specialty restaurants without any supplemental dining charges.

While complimentary internet is not uncommon on river cruise ships (AmaWaterways, Avalon Waterways, Scenic Cruises, Tauck, Viking and Uniworld offer free internet as an onboard amenity) ocean liners have been slow to meet the demand. Regent Seven Seas will be offering this complimentary service to its top tier guests starting in January and Viking Ocean Cruises will launch its all-verandah ship, Viking Star, with the service for all guests in May. Azamara Club Cruises had been offering free Wi-Fi to guests as a club benefit but took it off the roster this month. 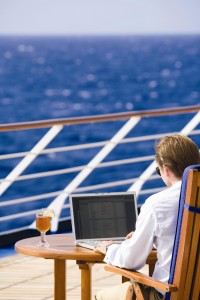 The keen interest in free Internet as a benefit of choosing one supplier over another is not new. Several surveys over the past year put the amenity of free Wi-Fi on top of the list for what leisure travelers and road warriors alike want in a hotel stay.

A Hotels.com guest poll released in April put free Wi-fi on par with free breakfast as top things guests look for when choosing a hotel.

A more recent survey conducted by the online hotel booking company found that 35 percent of American travelers are unwilling to ditch their devices while on vacation.

The complimentary Internet rollout aboard Oceania will be staggered across the fleet, tied to the official start of each ship’s winter schedule. The first sailings will be Nautica on Oct. 25, 2015, followed by Marina on Nov. 3, Regatta on Nov. 4, Riviera on Dec. 2, and Insignia on Jan. 4, 2016, when it begins its third 180-day Around the World voyage.