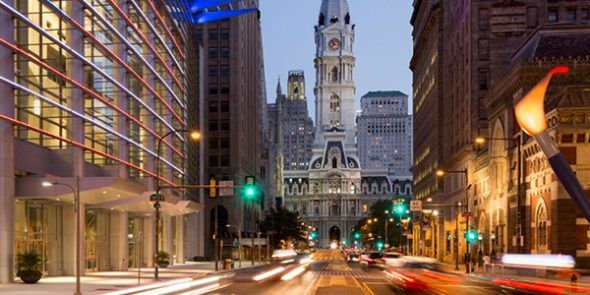 As Philadelphia prepares for the Democratic National Convention to be held July 25-28, no doubt delegates, mediaphiles and political junkies who flow into the city will be wondering what to do, what to eat and what to see in the country’s first World Heritage town.

To start, the convention will be happening at the Wells Fargo Center in South Philadelphia and getting around this revolutionary city will be no walk in the park. The following is an intro primer to Philadelphia to help politicos and tourists alike take on the town. 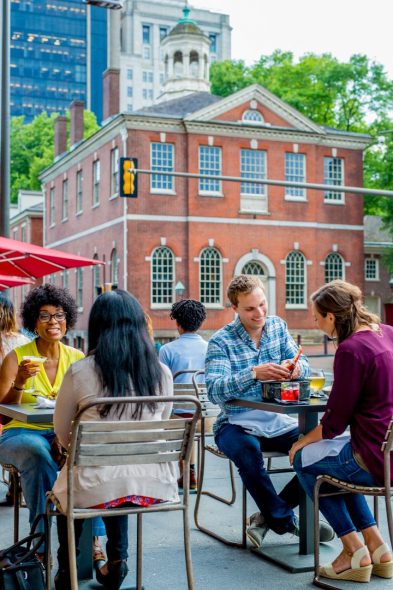 The directionally challenged can thank city founder William Penn for Philadelphia’s logical downtown, called Center City. Perpendicular streets run north-south (numbered streets) and east-west (named mostly after trees, including Walnut, Locust and Spruce). What would be 1st Street is named Front Street, and what would be 14th Street is Broad Street, also called Avenue of the Arts. Pro tip: William Penn continues to give direction to the city. His statue atop City Hall faces northeast, so he can help people get their bearings

Cutting through the city grid, the diagonal Benjamin Franklin Parkway stretches from near City Hall to the Philadelphia Museum of Art at the edge of Fairmount Park. Planner Paul Philippe Cret and designer Jacques Grébermodeled the mile-long thoroughfare after the Champs-Élysées of their native country. Some of the city’s most important cultural institutions line the Parkway—the Barnes Foundation, The Franklin Institute, The Academy of Natural Sciences of Drexel University, the Rodin Museum, the Ruth and Raymond G. Perelman Building and the crowning Philadelphia Museum of Art.

Center City Philadelphia sits between two waterways: the Schuylkill River on the west and the Delaware River 30 blocks to the east. Recent developments on both waterfronts have made them bigger draws than ever before. The Schuylkill River Trail and Schuylkill Banks Boardwalk welcome walkers, runners and bikers who take advantage of this piece of the East Coast Greenway, while Spruce Street Harbor Park and Blue Cross RiverRink along the Delaware attract crowds with food, beer and a roller rink or ice-skating rink, depending on the season.

A Little About The Food:

Introduced by early German settlers, this doughy pleasure serves as more than a snack. In the morning, locals can be seen dipping pretzels into cream cheese for Philly’s version of a breakfast bagel. Other times of day, mustard is the condiment of choice. Food carts and the multiple Philly Pretzel Factory locations sell the oblong version, and the Amish vendors at Reading Terminal Market bake the more recognizable (to non-Philadelphians) circular twisted shape with a delightful buttery finish.

Philadelphia is known for the cheesesteak. Popular spots include South Philadelphia’s across-the-street rivals Geno’s Steaks and Pat’s King of Steaks and South Street’s Jim’s Steaks. The meat-and-cheese (and sometimes onion) icon is delicious and worth the praise. But there’s another Philly sandwich that many locals consider to be the real hometown choice: roast pork. Like its more popular cousin, the roast pork starts with a quality long roll, then topped with roasted sliced pork, provolone cheese and broccoli rabe. Some people add long hots (peppers) for even more flavor. The version at Tommy DiNic’s in the Reading Terminal Market earned the title “Best Sandwich in America” by the Travel Channel. Geno’s, 1219 S. 9th Street, genosteaks.com; Pat’s, 1237 E. Passyunk Avenue, patskingofsteaks.com; Jim’s, 400 South Street, jimssouthstreet.com; DiNic’s, 12th & Arch Streets,  tommydinics.com.

Called Italian ice in other parts, water ice dominates the summer snack market in Philadelphia. It’s smoother than a snow cone or shaved ice, and the flavor is mixed right in, rather than poured on top. Lemon and cherry win the most-ordered contest, though the sweet treat comes in a variety of flavors. South Philadelphia’s John’s Water Ice and multiple Rita’s Italian Ice locations keep people cool in the warmer months. John’s, 701 Christian Street, johnswaterice.com; Rita’s, ritasice.com.

Outside of the 215/267/484 area codes, they’re often called “subs” or “heroes.” Philly takes its hoagie game seriously: The bread has to be just right—slightly crunchy on the outside, and soft enough to allow a hungry eater bite through to the hearty supply of deli meat, cheese and toppings. Sarcone’s Deli and various locations of Primo Hoagies set high standards. Sarcone’s, 734 S. 9th Street; Primo, primohoagies.com.
Philly Legends:

There are plenty of them. To keep it simple, this piece focuses on the city founder (William Penn) and its prolific adopted son (Benjamin Franklin).

Founded in 1682, Philadelphia was William Penn’s “Holy Experiment.” King Charles II repaid a debt he owed to Penn’s father by giving the young Quaker a parcel of land the king called Pennsylvania, meaning “Penn’s Woods.” Penn decided to design a city based on his religion’s ideal of equality—radical for the time—where Quakers, Catholics, Anglicans and Jews lived alongside one another. Resident’s welcoming nature harkens back to the city’s founder, who called the city Philadelphia, a combination of the Greek words for “brother” and “love.” (Fun fact: Humble Quaker that he was, Penn didn’t like the boastful name Pennsylvania.) Though many think it’s Ben Franklin, that’s a statue of William Penn on top of City Hall.

Philadelphia’s favorite Founding Father continues to influence his adopted city. His name, likeness and philosophies permeate Philadelphia, and for good reason. The short list: He discovered electricity in storm clouds; founded the University of Pennsylvania, the American Philosophical Society and the country’s first volunteer fire department; invented bifocals, swim fins and the lightning rod; published Poor Richard’s Almanack and the country’s first political cartoon; helped to draft the Declaration of Independence; and signed the Declaration and the Constitution. What does his gravestone say? “Printer.” Franklin fans throw pennies on it—in honor of his penny-saved-penny-earned advice—at Christ Church Burial Ground. Arch Street, between 4th & 5th Streets.

Philadelphia’s difficult-to-acquire liquor licenses and Pennsylvania’s let’s-call-them-quirky liquor laws created a dining phenomenon: the BYOB, short for bring your own bottle. What began as a restaurant workaround has become an essential ingredient to the Philadelphia restaurant scene. Diners bring their bottle of choice—wine, champagne, beer, even spirits—to the more than 300 BYOBs in the city, and chefs bring their best to the plate.