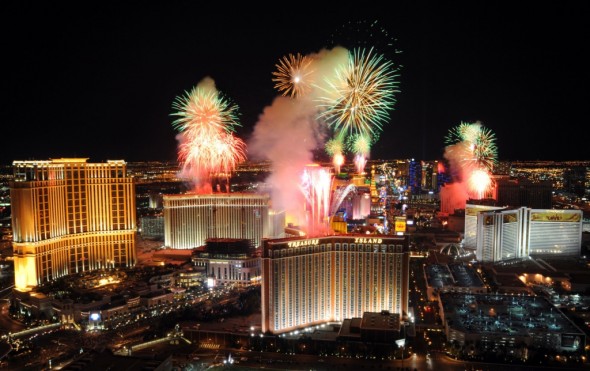 As if Las Vegas is not on fire enough it puts on one of the largest New Year’s Eve parties and pyrotechnic firework shows on the planet. The rundown of fun brings an exhaustive list of happenings at Strip hotels hotels and in the downtown Fremont Street corridor. The Strip , itself closes to traffic in the early evening and the mile-long neon byway becomes a pedestrian free-for-all through the early dawn hours.

The following is a list of what is happening where for New Year’s in Las Vegas as the curtain falls on 2012.

The Las Vegas sky will light up as the clock strikes midnight, and celebrators ring in the New Year by watching a stunning fireworks display across the Strip . The dazzling show will be fired from the rooftops of seven resorts along the iconic boulevard: MGM Grand Hotel & Casino, ARIA Resort & Casino, Planet Hollywood Resort & Casino, Caesars Palace, Treasure Island (TI), Venetian Resort-Hotel-Casino and the Stratosphere. The much-anticipated America’s Party presents a pyro sky show produced by Grucci of New York. 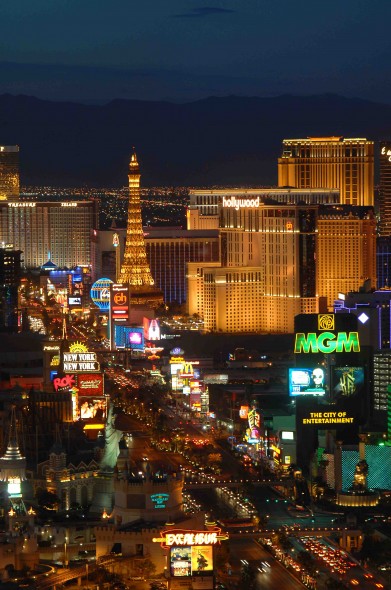 A word to the wise: Las Vegas fills up fast on New Year’s and that includes its hotel rooms, which can be booked at prices that range from double to five times the usual rate. Early planning ensures a well-planned and fun evening with no sticker shocks or stuck-in-traffic plan Bs. Also, because The Strip shuts down to traffic for the night, visitors must try to be where they plan to be for the evening and try not to count on taking cars or cabs during that time. A street position somewhere on the Strip promises decent fireworks visibility. A high-rise window from the South side of The Strip looking north over Las Vegas Blvd. ensures a show like none other.