New York City can be a challenging place to visit: crowded sidewalks, traffic jams, high prices for nearly everything and constant competition for the city’s comforts. So a stay in New York City should come with a few treats – and one of those should be time travel to a more innocent age with a stay at The Pierre.

The hotel, located on Fifth Avenue and East 61st Street at the edge of Central Park and caddy corner to The Plaza, could not be more convenient for exploring the city as if you were Jane Fonda and Robert Redford in Barefoot in the Park. You can practically see Don Draper walking down the narrow hallway to meet his mistress of the moment (in fact several episodes of the AMC series were, indeed, filmed there – check out room 435). For travelers who want to fit a small treat into their New York sojourn, a stay at The Pierre puts them in the mood for both prosperity and extravagance. 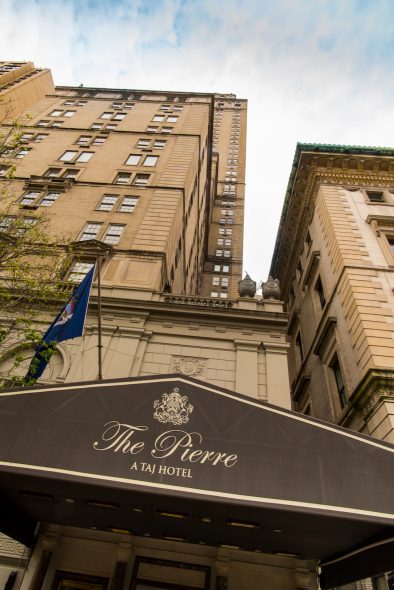 Find some 140 guest rooms and 49 suites, tastefully appointed with marble bathrooms and plush pastel furnishings. For those guests bringing an entourage, The Pierre offers 11 specialty suites with up to six bedrooms, two with spacious landscaped terraces overlooking the park. In Mad Men style, the hotel makes a late model Jaguar available to guests upon request. The “way back” hotel experience begins, however, with the ornate elevator ride managed by a gloved attendant and the Cosmopolitan cocktail ordered up in the Two E Lounge (a long-lived tradition for the hotel) before ascending the floors.

Meals can be brought up for in-room dining or enjoyed at Perrine, The Pierre’s French-American restaurant, offering outdoor seating with views of Central Park. But midday fare or cocktails in The Rotunda will take your breath away. Panels line the circular room, each with originally painted scenes of the gods in play, accented by candelabra sconces. This is the booking to be envied for weddings or meetings or special events. Squint and you can see Al Pacino dip his partner in a tango in the legendary scene from Scent of a Woman, filmed at The Pierre.

The hotel opened when the country was in the throes of the Great Depression. It was a place for New York’s elite to meet in a world gone mad, preserving a certain dignity in daily life. It had been a 714-room hotel that rose 41 stories on the site of the Gerry mansion (think: origins of “gerrymandering”). The penthouse floors made a stunning signature on the Manhattan skyline then as now. They were designed to evoke Mansart’s Royal Chapel at Versailles, with Corinthian pilasters and arched windows, under a tall, slanted and adorned copper roof. 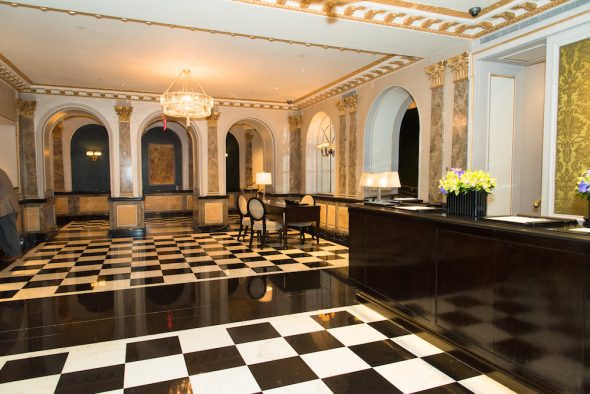 The property became a Taj Hotel in 2005 but had many notorious owners and guests on its rolls in the years that intervened. For instance, J. Paul Getty bought the building in 1938 and turned many of the rooms into residences. Richard Nixon lived at The Pierre for several months in 1968-69 before moving to Washington D.C. and the White House. Other famous residents included Elizabeth Taylor, Aristotle Onassis, Sumner Redstone, Mohamed al-Fayed, and Yves Saint-Laurent. Several of those apartments have since become “grand suites.”

The films made at The Pierre run the gamut, perhaps seen most recently as a backdrop in Trainwreck with Bill Hadar and Amy Schumer. Meet Joe Black and Arthur also used The Pierre. The Pierre Hotel Affair, published this year, profiles a 1972 robbery that took place there that was perhaps the largest successful heist in history. It was organized by the Lucchese crime family, which managed to make off with $27 million.

Average rates at The Pierre run $383 per night (special offers available for meeting planners), including the five-star service that has always been a leading attribute of the hotel. Other amenities include fast Wi-Fi, 24-hour laundry service with one-hour pressing, a 24-hour doctor on-call, soft, plush bathrobes, access to one of the best concierges in New York City and a history that is the stuff of books.