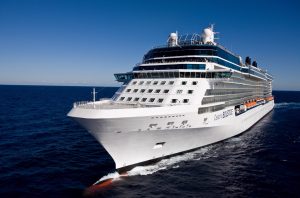 Coming down from a very tough 2012, Richard Fain, Chairman and CEO, Royal Caribbean Cruises, Ltd., still envisions a golden future for cruising. RCCL’s brands together field about 40 ships. Its only larger rival and competitor is Carnival Corp, which fields about 100 ships.

No doubt recent adverse events in 2011 and 2012 bruised cruising’s reputation and reduced its bottom line. As of mid-2012, RCCL alone had suffered a double-digit drop in stock price, year over year. By luck of the draw, the most sensational adverse event, the wreck of the Costa Concordia—of possible seagoing misfortunes, quite a low-probability, high-consequence one–directly befell Carnival Corp. 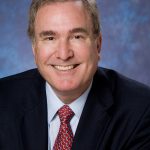 Pullmantur Cruises, and CDF Crocieres de France. RCCL also has a 50 percent joint venture interest in a sixth brand, TUI Cruises, with its other partner, TUI, the powerful German travel consortium designed to tap into the growing and lucrative German market. The RCCL brands collectively will be taking delivery of at least three more ships by 2015.

Since Fain considers cruising an inherently innovative business, he insists that such events as Europe’s financial crisis and the Costa Concordia’s sinking will raise the bar on the industry’s future resilience, stimulating progress and further profits.

The dire events of 2012 that commenced with the Costa tragedy continued into February, when Princess Cruises’ Crown Princess and Ruby Princess were hit by norovirus outbreaks. In late February, the Costa Allegra lost power and went adrift in piratical waters off Africa. And then there was the bandit incident when Carnival Splendor’s shorex passengers were robbed in Puerto Vallarta, Mexico.

Still, Fain insists, all these events will eventually underscore cruising’s resilience and impel the industry to new achievements. “There is no question that these events have been enormous actors in the market,” says Fain. “But we’ll have some yield increases this year, as in 2011,” he notes.

True, the company’s second quarter results featured a net loss of $3.6 million, or two cents per share (compared to a profit of $93.5 million, or 43 cents per share, in the same period last year). But the results also contained a forecast that, for the full year 2012, net yields will increase 2-3 percent on a constant-currency basis.

The second-quarter report also closely tracked the inevitable wavering of demand. For example, although demand remained solid in the Caribbean and Asia, for Europe, larger-than-anticipated discounting was required.

“The steady drumbeat of negative news emanating out of Europe is certainly having an impact,” says Fain. “As a result, we are seeing pluses and minuses in the different geographical markets. North America is holding up reasonably well. Asia is a big plus; but Europe is a pretty consistent minus.”

To be sure, yields were less than Fain had hoped. But, considering in both 2011 and 2012 the economy was lackluster, they held up, he adds.

“For example, Royal Caribbean expected double-digit increases for its cruises out of China. It had to settle for more modest ones. But it was grateful for those and will be moving a second ship to China in 2012. Royal Caribbean will also be expanding its existing presence in Australia, another growth area,” he says.

Early bookings in other areas, such as the Eastern Mediterranean (Egypt’s), also implied very positive yield improvements in the company’s eyes. And these, too, did not materialize as envisioned. But that was partly attributable to the industry’s previous capacity increases in the area, Fain asserts. After that market’s fall in 2011 (one of the biggest such falls in cruising’s history), a more diversified RCCL has enjoyed better overall results. Although, no question, like Carnival Corp., it’s taken a noticeable hit in bookings since the start of 2012.

“In this kind of situation, most businesses would be talking about how much worse things are. We’re actually saying things are getting better but not as fast as we expected,” says Fain.

He explains that part of the profit paucity also relates to RCCL’s known penchant for risk-taking in the market—for trying new things (itineraries, deployments, programs, hardware) that don’t necessarily have an immediate or even mid-term payoff.

“There is a willingness to try new things and to undertake activities that don’t necessarily pay off instantly—things that pay off better in the long-term,” he says. “We think that’s true of some of our marketing programs, our relationships with travel agents, and even our onboard programs, which may take a while for people to appreciate, to get their arms around.” 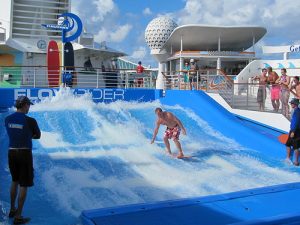 Meantime, despite untimely and unforeseen hurdles, nautically or geopolitically, Fain and RCCL remain in the profits race and a bit of a glam game. They’re riding a wave of consumer excitement over their incessant newbuilding, which has lately comprised the ships of the Solstice class (for Celebrity, its premium-market brand), and of the gargantuan Oasis-class shops: Oasis of the Seas and Allure of the Seas (for its flagship unit, Royal Caribbean International, its contemporary-market brand).

The final Solstice sister, Celebrity Reflection, just started sailing last month. “We’ve put some very special things on her that take Solstice up to a whole new level,” says Fain. “In fact, we’ve made more changes on Reflection than we did on Silhouette (the previous Solstice iteration, which debuted for Celebrity in July, 2011).

“The earlier Solstice vessels were widely acclaimed; the Reflection equally and emphatically continues that tradition. But we’re hardly resting on our laurels,” says Fain. “Our team has made the Reflection even better with new interiors, better artwork, the new Lawn Club (a clear homerun). And our entire fleet benefits mightily, as it always has, through retrofits and more.”

Considering capacity growth throughout the industry Fain admits growth has been slowing.

“As a way of expanding business, we sought to extinguish the idea that cruising was for sedentary older people. We did that perhaps most powerfully by outfitting our ships with dynamic attractions and activities. Naturally this caused us to really spend on the newbuilds (about $1 billion each on the Oasis and Allure). Today’s ships feature rock-climbing walls, ice-skating rinks, surfing simulators, parks, amphitheaters, and such a wide variety of the more usual restaurants and entertainment. 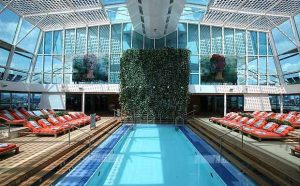 “We arranged this disconnect so that more and more people would silence any negative buzz they’d picked up about cruising; and supplant it with any positive buzz they had picked up. They would then elect to cruise for the first-time. And then become repeaters,” says Fain. “So we know that our innovations don’t just build profit, they build interest in cruising and the industry as a whole.”