In a country so deeply steeped in future forward industrialization, China’s few preserved pathways to the past are to be treasured. And so it is with Suzhou, just over an hour from Shanghai but so mired in the Song Dynasty that time must be taken to meditate on the marvels of its 69 preserved gardens and waterside villages where it is still possible to find a seat at the Inn of the Sixth Happiness.

Tabbed the Venice of China, Suzhou is an easy day trip from Shanghai, 70 miles away (about 90 minutes drive from Shanghai Pudong International Airport,PVG). For those hubbing in Beijing, the mileage is a little lengthy – 850 miles and five hours by high-speed train. And for business travelers, the city of 13 million is often on the must-travel list as it is one of China’s foremost cities for foreign investment given its proximity to Shanghai and the lower operating costs it offers.

Where Industry and Artistry Meet

In fact, after Shanghai, Suzhou is the second largest industrial city location in China, home to 27 listed companies and housing development for iron and steel, IT and electronic equipment manufacturing, and textile products. Economic data out of China holds that the Kunshan business district in Suzhou manufactures half the world’s notebook computers.

Whether there for business or leisure, Suzhou is also the focus of millions of tourists seeking to experience the destination’s more than 400 attractions, from looming pagodas and temples to world-class museums, and ancient gardens and villages protected as UNESCO World Heritage sites. As the economic center of China during the Song dynasty (960-1279, and the old capital of the Kingdom of Wu, that thrived more than 2500 years ago, the city blooms like a rose for those who have time to explore the layers.

A walk along Pinjiang Street in the center of Suzhou’s old city tells all. The near mile of Song Dynasty homes and stores line a quaint canal bisected by stone pedestrian bridges where it is still possible to squint and see peasants in their conical hats bearing baskets of live ducks and elders sipping tea and playing tile games under thin elms while wooden barges ferry goods from one village to another. 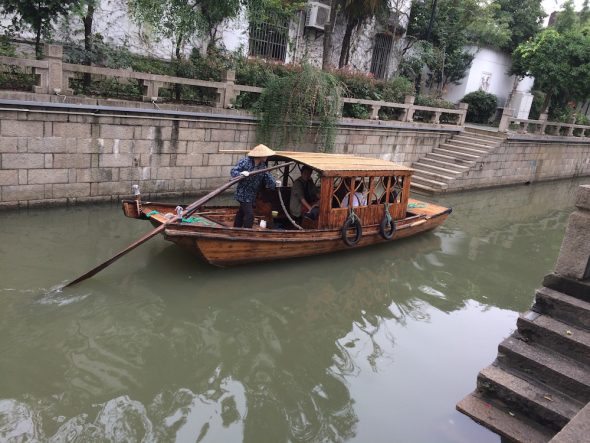 Not much has changed here – the elms, the elders are still there; the barges now carry tourists on a short ride along the street. But the crowded cobbled paths are mostly young people shooting photos of themselves and their friends, motor scooters carrying boxes from one store to the other and boutiques selling fashionable silk goods for top prices.

Plenty of street food to consider here – especially for those partial to stinky tofu or ducky-shaped dumplings. Hip coffee houses provide respite along the scenic streets – and more, if you want to take that coffee with a lump of sugar and a kitty or two (cat house cafes are all the rage these days). During the fall it is possible to find restaurants serving hairy crab – a delicacy here and a noble tradition involving fishermen at nearby Taihu Lake who bring in their catch when the crab is in season (or you can head to the lake just outside the city and sit down for a feast at Dongting Restaurant at Taihu Lake village).

While shopping and dining are mainstays of any visit to China, museums and gardens are Suzhou’s stock and trade. There are some 90 out of 200 villas and gardens once owned by the city’s officials dating back to the 13th century that survive and thrive. Several may be visited still and one of them, in particular, should be on any tour. That is the “Humble Administrators Garden,” built in 1509 by Wang Xianchen, a Ming official who turned his frustrations with the local bureaucracies into the town’s grandest garden. A walk through the 13-acre site brings encounters with gnarling, curling rock formations and placid hillocks crowned by ornate gazebos overlooking a meandering pond. The gardens and pavilions rest on the old relics of a residence of the time, and a Taoist temple.

Along with the Summer Palace in Beijing, the Mountain Resort of Chengde in Hebei Province near Beijing and the Lingering Garden in Suzhou, the Humble Administrator’s feat is considered one of China’s two four garden attractions. Similarly, Lingering Garden near Changmen Gate in Suzhou is a 5.8-acre meditation on Qing style classic beauty with grand halls and precious fairyland paths along the waters. Maples cover the hills overlooking the western side of the garden and the red fall spectacle creates a stunning effect over the whole garden.

The Suzhou Museum, designed by I.M. Pei, is another treat to be found only in this classical city and the only major public project undertaken by the world-renowned designer in his ancestral land. Although Pei never lived in Suzhou it was the land of his forefathers and where he spent many summers as a youth. The $40 million building has his passions all over it – squares, rectangles and pyramids, expansive use of glass and light. Even traditional motifs – a winding Chinese garden and pond, with a Chinese footbridge and rock faces thinly carved into a series of mountain peaks against a weathered, whitewashed garden wall. All materials attempt to bring together Suzhou’s stark white-walled, charcoal-colored sleight roof tones against backdrops of black granite water features and the soft green palates of nature.

As Suzhou was a major cultural and economic center during the Ming and Qing dynasties, and the museum houses antiquities from those periods, including carved jade, exquisite porcelain bowls and figurines, calligraphy and paintings. Also on view are works from contemporary artists, such as Xu Bing, Cai Guoqiang and Zhao Wuji.

Suzhou was a central force in the silk trade through the centuries, so another museum worthy of a stop is the No. 1 Silk Factory, a 100-year-old, state-owned working factory and museum where you can watch master-weavers in action. The factory hums in well-oiled cylinders taking cocoons from the carefully bred mulberry worms and soaking, cleaning them and spinning them into miles of thin white yarns. In another hall weavers take various grades of silk and manage blindingly detailed embroidery work sold for thousands of Yuan. A quilt shop beyond offers warm and thick silk quilts starting at around $100, complemented by aisles of duvets, tatting works and still another huge room of fine clothing and accessories. This is the place to get your silk, as you will know something of the quality you are getting and the prices will be fair.

A day in Suzhou should not go without fortification with famous Suzhou noodles. These are thin and plentiful, served with various toppings sprinkled with spring onion and garlic sprouts. The Su noodles of Jiangsu Province, unlike the thick noodle dishes in northern China that place emphasis on texture, emphasize the soup. In fact, it is said that if you go into a Su noodle restaurant in Suzhou, pay attention to the bowls left on the table. If the noodles remain but the soup is done, the restaurant can be recommended. If the noodles have been eaten, then you best look elsewhere.

A favorite spot with Su locals that has been serving up aromatic Suzhou noodle soups for more than 60 year is Lu Chang Xing Noodle Shop and it is one of the few places you can get this dish for dinner. The noodle soup is made of chicken meat, pork, pig bone and eel bone for a rich and fatty infusion with a hint of sweetness. Abundant toppings offered include braised pork, stir-fried shrimp, bamboo shoots, shredded meat and smoked fish and mushrooms. The red soup noodles with braised pork topping is recommended. Expect to pay around $3 per person.

Shangri-La Hotel Suzhou is a modern high-rise hotel in the center of Suzhou about three miles from the old city. The property offers 390 contemporary guestrooms and suites on the 28th to 51st floors of one of Suzhou’s tallest buildings with views of the city. Rates start at around $100 per night.

Pinjiang Lodge is a small traditional Chinese-style hotel converted from a Ming Dynasty mansion that is walkable to shopping, gardens and dining in the Old City. Five conference rooms are available for meetings and parties of up to 150 people.

Tonino Lamborghini is a slick and palatial property on the edge of Jinji Lake in what is considered the industrial or business section of Suzhou. Guestrooms in the 93-room new-build are decked out in dark woods and decorative lighting and chrome and leather tones for accents overlooking the lake and gardens and in proximity to fine dining and shopping. Rates run around $240 per night.

China Eastern may be one of the least expensive ways to fly to Shanghai from the U.S. It offers flights to Shanghai from New York, as well as Vancouver, Toronto, Chicago, San Francisco, Los Angeles and Hawaii.