Considered the Crossroads of the Americas, Panama is no stranger to the pace of international business. Panama has been growing at a breakneck speed of 9 percent a year at a time when many top world economies have slowed or faltered. And international hotel companies are taking notice. Among them, the Bristol Hotel in Panama City has put its print upon this city’s gleaming skyline and is able to offer visitors all they would expect from a city that is fast anchoring a reputation as the mini-Dubai of the west. 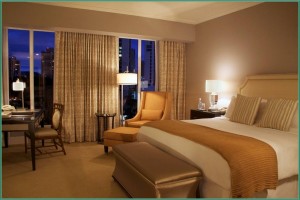 The property, a member of the exclusive Kurtz-Ahlers collection of hotels and resorts, sits squarely in the center of things — located in the heart of Panama City’s financial district. The Bristol Panama is a short walk to Balboa Avenue and close to great shopping, golf courses, entertainment, and cultural pursuits. Among them, the legendary Panama Canal, Casco Viejo, Panama Viejo, Metropolitan National Park, and the Bio-Museum designed by Frank Gehry.

Some 80 international banks have developed branches in this area and visitors benefit from Panama’s easy entry, which allows guests from the US and Europe (among many other regions) to visit without a visa and stay for six months. And when they visit, they find the familiarity and comfort they require amid the Bristol’s 158 guest rooms, suites, and residences decked out with the sweet necessities of life: Frette cotton sheets, Hungarian down-filled pillows, luxurious duvets, Molton Brown toiletries, modern high-tech amenities, and an alert and attentive personal butler.

And then there is the Spa at Bristol, offering such heady treatments as the Obsidian Stone Healing massage, the Volcano Touch, and the Anton Valley Mood in surroundings of gold and silver tones to attract the sun and moon energies.

Dining at Salsipuedes is international but guests can immerse in the soul foods of the city there as well where Panamanian cuisine soaks in the flavors of Afro-Caribbean, French and Spanish influences. The restaurant serves more than 70 varieties of rum, but when in Panama, the local raw white rum, Seco, is the national liquor and Seco con leche (with milk) a favorite libation in the countryside.

Beyond the Bristol, Panama comes alive with a chorus of faces that make this land bridge between the northern and southern hemispheres a magical destination.

First there are the must-do’s: the Panama Canal, Panama Viejo, Casco Antiguo (also known as Casco Viejo, a UNESCO site) and the jungles surrounding the Canal area. The land tells of a dramatic time line that dates back to 1519 and with places that have been conquered and rebuilt by Spanish conquistadors, pirates, fortune seekers, financiers, and now captains of industry over the centuries. Panama Viejo remains Panama City’s artistic center with an international appeal and recurrent art events and shows such as the annual Panama Jazz Festival, International Music Festival, and Sobresaltos Dance Festival.

“Panama is like a rebellious teenager,” says Al J. Petrone, CEO, Bristol Hospitality Group. “The city is like Las Vegas was 30 years ago, bright, alive, continuously reinventing itself.”

To showcase the culture, the beaches, the amazing rainforest treasures and the colorful, if not intense, history of the land and the canal that Panama operates, Bristol Panama has rolled out several value-laden and activity-packed packages that make visiting Panama, experiencing Panama and staying in Panama a breeze. These include a City Tour Package, A Chagres River & Embera People Package, a Panama Canal Rainforest Boat Adventure Package, and a Path Between the Seas Package.

The Bristol Panama is an easy 12 miles from Tocumen International Airport (PTY) and walkable to most places of interest within Panama City. The US dollar is the national currency (but find Panama-minted bills called the Balboa) and expect to see many well-heeled American transplants. Panama is home to some 25,000 U.S. expats who call this thriving city at the crossroads between the Americas and confluence between the oceans home.