Two things never seem to get old: Halloween and Disneyland. Although the summer is in full swing, the Southern California theme parks are already imagining cooler climes to come and gearing up for a season of thrills and chills. A kind of spell will be cast during Halloween Time at the Disneyland Resort this year as spooky fun expands into Disney California Adventure Park from Friday, Sept. 15, through Tuesday, Oct. 31, 2017.

For the first time, Cars Land in Disney California Adventure will transform with a special Haul-O-Ween makeover as the citizens of Radiator Springs don Halloween costumes and decorate their respective homes for the season. Lightning McQueen, Mater, Cruz, Red and DJ will be all dressed up–as a super hero, a “van-pire,” a pirate, a clown and a punk rocker, ready to go “trunk-or-treating.” Attractions transform, too, with Mater’s Junkyard Jamboree turning spooky as the Graveyard JamBOOree, and Luigi’s Rollickin’ Roadsters getting a seasonal twist to become Luigi’s Honkin’ Haul-O-Ween.

Disney California Adventure also will be featured for the first time as part of the pre-party mix-in for Mickey’s Halloween Party, a separate-ticket event that features special entertainment, Disney characters in their Halloween attire, and trick or treating at locations throughout Disneyland. This year, a ticket to Mickey’s Halloween Party has even greater value as guests will be able to visit Disney California Adventure as well as Disneyland during the three hours prior to the beginning of the party in Disneyland.

Tickets to the popular Mickey’s Halloween Party go on sale Monday, July 17 for Annual Passholders, Disney Vacation Club members and Disney Visa Card holders. Tickets go on sale Monday, July 24 for the general public. They may be purchased online and on mobile devices at http://Disneyland.com/party as well as at the Disneyland Resort main gate and by phone at 714-781-4400

At Disneyland, guests will enjoy frightfully fun thrills on popular Halloween attractions, especially Haunted Mansion Holiday and Space Mountain Ghost Galaxy, along with themed foods and merchandise, plus spooky décor like the Mickey Mouse jack-o’-lantern and a pickins’ from Pumpkin Festival on Main Street, U.S.A.

Haunted Mansion Holiday celebrates the collision between Halloween and Christmas as Jack Skellington, from the Walt Disney Pictures classic “Tim Burton’s The Nightmare Before Christmas,” offers his unique take on the holidays. The annual Haunted Mansion Holiday gingerbread house, presents a new design each year, and this year it’s the creepy Oogie Boogie in the form of a 7-foot-tall cookie on the table in the Mansion ballroom. He is peeling back the roof of a gingerbread Haunted Mansion, uncovering myriad gummy bugs and worms.

Another Halloween Time favorite at Disneyland is Space Mountain Ghost Galaxy, a reimagining of the popular thrill ride in Tomorrowland. Guests on board the speeding Space Mountain vehicles are thrust into a ghostly galaxy where they are surrounded by eerie screams, sound effects and music. Spine-chilling spirits pop out of the darkness, appearing to reach out and menace the space travelers.

Disneyland will continue to offer its traditional Diá de los Muertos skeleton display in Frontierland for the Halloween season, through Nov. 2. 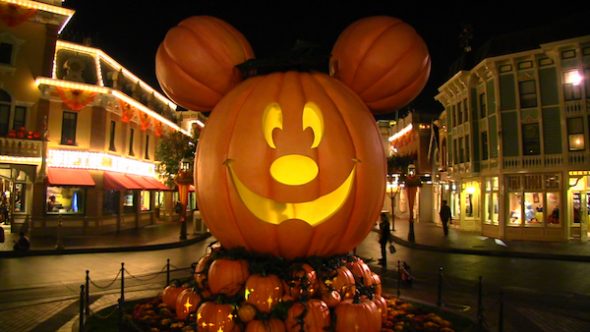 Guests are invited to dress in costume for Mickey’s Halloween Party where they will trick-or-treat throughout Disneyland for candy and healthy snacks.

Exclusive to Mickey’s Halloween Party is the “Frightfully Fun Parade” led by The Headless Horseman of Sleepy Hollow (from the Disney animated classic “The Adventures of Ichabod and Mr. Toad”). The Horseman rides through the park on his ghostly black steed with a flickering jack-o’-lantern to usher in the parade featuring Jack Skellington followed by a procession of grim, grinning (and hitchhiking) ghosts from the iconic Haunted Mansion attraction. The creepy Dr. Facilier from Disney’s “The Princess and the Frog” calls on mystical powers, summoning his Shadow Men from the bayou to loom large over his strange and twisted Voodoo parlor. The mischievous Disney villains appear out of the darkness, ready to stir up some trouble.  The wicked gathering includes the Evil Queen, Jafar and Cruella.

Disney characters,villains as well as Mickey Mouse and friends, appear at locations throughout the park, and the Cadaver Dans ghostly quartet will perform on the Rivers of America in New Orleans Square and Frontierland.

Mickey’s Halloween Party Tickets may be purchased by the public online and on mobile devices at http://Disneyland.com/party, as well as at the Disneyland Resort main gate and by phone at 714-781-4400. Parking is not included in the ticket price, and parking fees will apply. 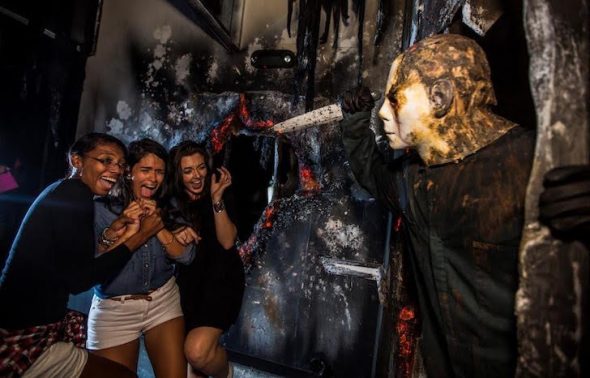 Meanwhile, tickets are now on sale for “Halloween Horror Nights” at Universal Studios Hollywood and the action kicks off September 15 and continues on select nights through Saturday, November 4, 2017.

Following is a partial list of this year’s terrifying line-up, with more maze news to come.

Tickets can be purchased at www.HalloweenHorrorNights.com/Hollywood, and advance purchase is recommended as event nights will sell out for all ticket options, including the all-new R.I.P. Tour, the After 2 p.m. Day/Night Combo Ticket, the Frequent Fear Pass, and must-have Front-of-Line ticket.

The new R.I.P. Tour invites guests in groups of up to 14 to scare in style with an exclusive VIP guide that also includes unlimited front-of-line privileges to all mazes and attractions, as well as a gourmet buffet dinner, drinks and valet parking.

Guests electing to purchase the After 2 p.m. Day/Night Combo Ticket can enjoy the park’s popular daytime attractions such as “The Wizarding World of Harry Potter,” “Despicable Me Minion Mayhem” and “Fast and Furious—Supercharged” on the world-famous Studio Tour by day, then step into the mazes and attractions located throughout the park to experience the terror of “Halloween Horror Nights” for one admission price.

A Frequent Fear Pass is available for fans that just can’t get enough of horror in their nights. They can visit multiple times throughout the run of the event.