When Disney coughs, it’s a breath heard ‘round the world and recently Disney more than breathed. The entertainment, hospitality and theme park company gave the media and 7,000 lucky Mickeyphiles some behind-the-scenes looks at what’s to come for 2016 and beyond.

Among the many announcements were new and enhanced Star Wars experiences coming later this year to the Florida and California theme parks, plans for a new Toy Story Land at Disney’s Hollywood Studios, and more details on Pandora—The World of AVATAR, which is already under construction at Disney’s Animal Kingdom.

Soarin’ Around the World will make its U.S. film debut at Epcot and Disney California Adventure taking guests to new places around the world. Additionally, the first Marvel attraction planned for Disney parks, will be coming to Hong Kong Disneyland in 2016.

“From Disneyland’s 60th anniversary celebration to the anticipation of Shanghai Disney Resort, we’re in the midst of unprecedented growth and expansion around the globe,” said Walt Disney Parks and Resorts Chairman Bob Chapek. “We continue the legacy in creating innovative attractions, worldwide entertainment, and magical lands that take our guests into the worlds of stories they love.”

In addition to these announcements, Chapek talked about plans to bring Star Wars-themed lands to Disney’s Hollywood Studios in Orlando and Disneyland park in Anaheim. Each 14-acre land will transport guests to a never-before-seen planet with two signature attractions, including a customized secret mission on the Millennium Falcon and an epic Star Wars adventure that puts guests in the middle of a climactic battle.

Disney Magic in the Details:

From a new Star Tours adventure to Star Wars Launch Bay, from a new Jedi Training Academy to “Season of the Force,” soon guests will be part of both new and enhanced experiences at Walt Disney World Resort and Disneyland Resort. 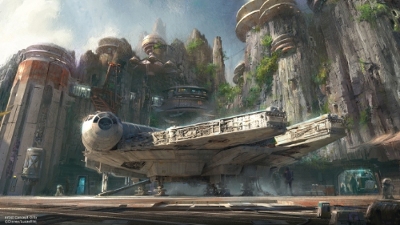 The reimagining of Disney’s Hollywood Studios will take guests to infinity and beyond, allowing them to step into the worlds of their favorite films, starting with Toy Story Land. This new 11-acre land will transport guests into the adventurous outdoors of Andy’s backyard. Guests will think they’ve been shrunk to the size of Woody and Buzz as they are surrounded by oversized toys that Andy has assembled using his vivid imagination.

Family-friendly roller coaster – All on the back of Slinky Dog, this coaster will zip and zoom, plunge and coast as it takes guests on a fun, toy-filled adventure throughout the new land. 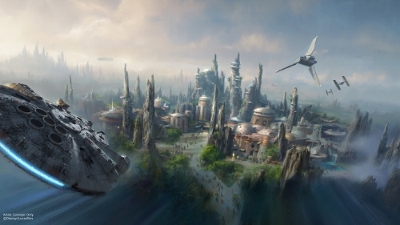 As part of the largest expansion in the park’s history, Disney’s Animal Kingdom will immerse guests into the world of Pandora, and the entire park will transform after dark with new nighttime entertainment experiences, offering guests longer days than ever before to experience this one-of-a-kind theme park.

Soarin’ Around the World in Florida and California

Next year, guests at Epcot in Florida and Disney California Adventure in California will journey to far-flung lands and fly above some of the world’s most unique natural landscapes and man-made wonders when the new Soarin’ Around the World makes its U.S. debut.

Hong Kong Disneyland guests will have the opportunity to meet and take photos with the Super Hero himself in 2016. The Iron Man Experience will be the first Marvel attraction at any Disney park, taking guests on an epic adventure over the streets and in the sky above Hong Kong. The adventure will begin at the new Stark Expo where guests board the Iron Wing to take flight and battle Hydra alongside fan-favorite Avenger, Iron Man.