Americans are still sorely lacking when it comes to taking that so elusive summer vacation and it turns out that there are some states where this offense is more pronounced than others. Idaho, New Hampshire, and Alaska hold the top spots for the states with the most workers leaving vacation unused. Looking at cities, Washington, D.C., San Francisco, CA, and Tampa, FL are home to some of the most under-vacationed employees in America.

Summer Vacation Not A Lost Cause … Yet

However, the survey noted that although more people are travelling, they are doing so for a shorter duration. The Americans that do take their vacation will do so for an average of 1.4 weeks, down from 1.7 weeks in 2016. Europeans saw an even more precipitous drop from an average of 2.4 weeks in 2016 to 1.9 weeks this year. Brazilians checked in with the longest average duration in 2017 at 2.2 weeks.

Hotel stays are still the most popular form of lodging among Americans (57%) and Europeans (47%) alike. However, other types of accommodations are becoming more popular with travelers. Americans are more likely to seek out free-of-charge options like staying with friends or family at 32%, compared to 22% of Europeans. However, Americans are less likely to use person-to-person rentals or exchanges at just 18%. This form of accommodation is second behind hotels for Europeans at 35% and, is actually the most preferred lodging for the French at 42% – the only group for which hotels are not the number one option. 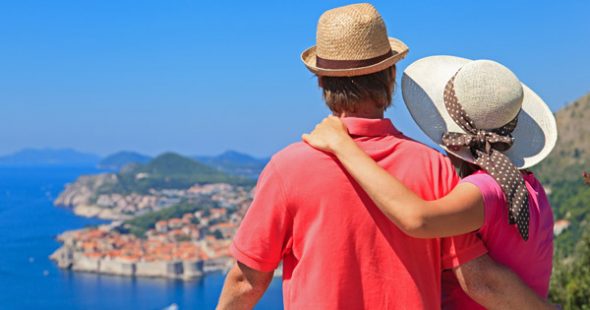 Where are Affluent Travelers Vacationing this Summer?

With Virtuoso as an influential trend predictor in the industry, mining a data warehouse of more than $39.7 billion in transactions, the top international choices for well-healed U.S. travelers this summer might be found here:

According to Phocuswright, seven in 10 travelers have a strong wanderlust to see the world. As is typical for summer travel, Europe dominates the list with eight of the 10 countries. Italy continues its reign atop the list, followed by the perennially popular U.K., France and Spain.

These four countries fit with a trend identified by Phocuswright; the desire to visit natural and cultural attractions is the top influencer for Americans when selecting destinations. The relative strength of the U.S. dollar against both the euro and British pound also makes the continent a particularly appealing destination for 2017.

Countries with strong ocean and river cruising appeal are benefiting from robust interest in those segments, as travelers extend their vacations with pre- and post-cruise stays in Germany, the Netherlands and Denmark. Ireland continues to lure travelers enchanted by its historic charm and lively culture. Canada’s strong showing is due to its proximity to the U.S., the purchasing power Americans currently enjoy there, and heightened interest around its 150th anniversary.

Data is sourced from Virtuoso’s U.S.-based travel agency members and reflects travel bookings between the Memorial Day and Labor Day holidays in 2017.

According to Hotwire and HotRate Hotel Data, there are still plenty of ways to save on vacation plans and booking rates this summer.

Where to stay for under $75 a night

These top destination cities offer rental cars for under $25 a day.

The best time to book Labor Day travel is just before the long weekend on September 1.