Scott Jordan didn’t mean to change the way people pack — or more specifically, don’t pack when he started SCOTTeVEST 18 years ago. He thought his multi-pocketed clothes would catch on with gadget users. But then 9/11 happened. Suddenly, checked bags were being scanned, rifled through, and restricted. Jordan’s just-launched clothing line clicked with time-strapped frequent fliers eager to avoid airport security delays.

“Back then, there were so many devices,” he recalls. “These were the days of Discmans, Palm Pilots, camcorders, cellphones, plus all of the cords, cables, and batteries that powered each one. My product offered a way around the baggage restrictions,” says Jordan.

Then airlines started charging a fee for checked baggage, then for carry-ons. And the concept of “wearing” your luggage started to make more sense. In an era where less is more, at least in travel, Jordan’s clothes have changed the way people think about how they carry their essentials.

His packing advice may also change the way travelers prepare for their next trip.

On the top floor of a busy office building in Ketchum, Idaho, framed by the Sun Valley Resort in the distance, Jordan says he never set out to change the way people pack. But when he saw an opportunity to cater to airline passengers, he jumped aboard.

“We were pitching our products as clothing for gadgets. But we switched to travel.”

That kind of adaptability translates into travel, he says. The best travelers can turn on a dime. No washer or dryer at your hotel? “A little hand soap and a sink, and you can do your laundry,” he says. “Need to leave for the airport in five minutes? A great traveler is always ready to go.

Jordan says the mind shift he inadvertently started with his line of clothes is far from done. Even now, he sees too many people who are burdened by stuff when they travel, who are “slaves to fashion” and pack more clothes than they would ever need. So how does the world’s leading expert on light packing pack light? 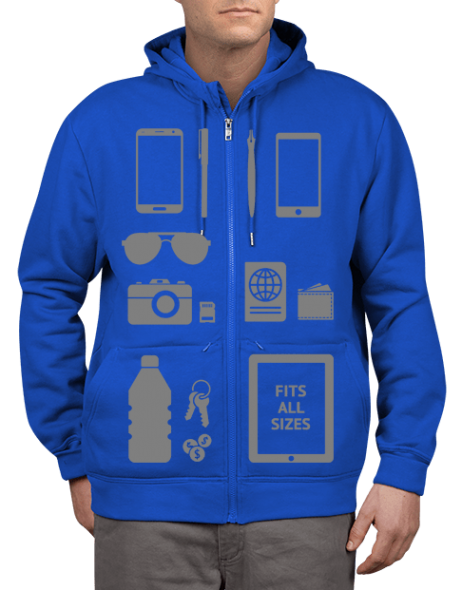 Take inventory. Before starting to pack and put everything on a table, he says. “Ask yourself, ‘Did I use that the last time I went somewhere? How often did I need it?” he says. If you didn’t need it, don’t bring it. Jordan estimates that most people pack 30% to 40% more than they require for a trip.

Don’t check any bags. It’s expensive, the airline could lose your luggage, and it’s almost certainly more than you need. “Think about your pants,” says Jordan. “No one looks at them. You could wear the same pair tomorrow; no one would care.” On a one-week trip, he brings two pair, which includes the one he’s wearing. Make sure they’re made from a fast-drying material so you can wash them by hand.

Pick a device and stick to it. Jordan’s preferred gadget is the iPhone X. It’s small and does almost everything a tablet or laptop can do. “I’m very good at Siri,” he says.

Don’t forget to pack an adequate power supply (chargers and adapters). His least favorite device: the tablet. “It’s useless,” he says. Whatever device you choose, be sure you have adequate power and a good data plan, he adds.

Jordan admits that he’s still learning how to downsize. On almost every trip, he discovers something he can do better. Always adapting. That’s the key.

There are other benefits to minimalist packing, other than carrying less. Downsizing is good for the environment and allows the traveler to focus on the reason for the trip, whether traveling for business or pleasure.And in a world full of distractions, not to mention luggage fees, it’s hard to can’t put a price on that. 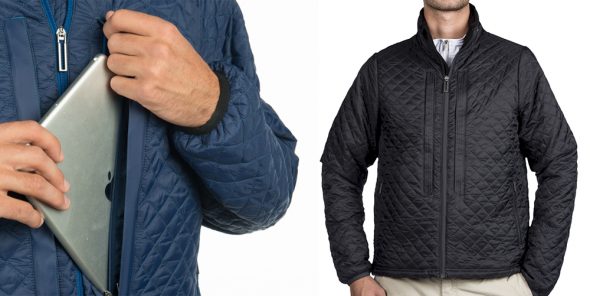 Packing Light: Tips for the road

Go dark.
Muted, dark colors go with everything. Leave the specialized, single-purpose clothing at home. “This requires you do do a deep think on what you’re going to do on your trip and what you need,” Jordan says. Blacks and grays can be mixed and matched together and will work for any occasion.

Be timeless.
Buying something fashionable instead of timeless (think “Men in Black”) may work for a few trips, but over time, it’s wasteful and makes you look dated, says Jordan. Instead, find clothes with a classic fit that withstand the test of time, like a dark blue blazer or a pair of chinos.

If you have to ask …
When you think: “Am I bringing too much?” you almost certainly are. For Jordan, a seven-day trip requires no more than four shirts, two pairs of pants, three pairs of socks and underwear. Your number may vary based on the type and length of the trip.

For those who want to pack more than pockets: Summer Luggage Pick

When it comes to the latest carry-on luggage, manufacturers are getting back to basics. So are travelers.

Integrated electronics, such as charging stations and digital scales, are taking a back seat to simple, no-nonsense designs. This new emphasis on simplicity can be attributed to new airline restrictions on “smart” luggage that went into effect late last year — specifically the models with integrated batteries — and perhaps to “feature fatigue” among travelers who just want a bag that holds their stuff.

The shift has had real-world consequences. Earlier this spring, Bluesmart announced it would “wind down its operations” after several airlines banned smart luggage with non-removable batteries. The airline policy change, it added, “put our company in an irreversibly difficult financial and business situation.”

No one keeps detailed, industry-wide sales numbers that would show a rise in this simpler luggage. But luggage experts say the trend is visible in the bags that debuted in March at the International Travel Goods Show in Las Vegas.

“Luggage manufacturers have adopted a more pragmatic approach by fine-tuning the elements that really work for travelers,” says Michele Marini Pittenger, president of the Travel Goods Association, the trade association that hosts the convention. 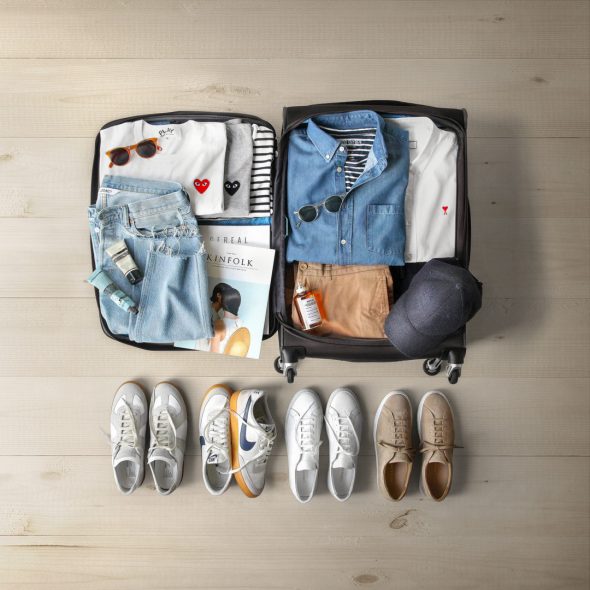 Take Samsonite’s new, no-frills Eco-Nu collection, available in sizes ranging from a wheeled underset carry-on to a 29-inch spinner. It’s a lightweight, minimalist bag with fabric made from recycled material that does what it’s supposed to do: carry your stuff.

That’s what Josh Tozier wanted when he went shopping for a new bag. As a product analyst for an insurance company in Boston, Tozier travels once a month for business. He just wanted something that could help him keep organized while he lived out of a suitcase. Even better: He found a deal online and paid $210 for his expandable Eco-Nu, a 30 percent discount.

Tozier says he was initially concerned about the recycled fabric, which he feared would be “flimsy” when he took it on the road. It wasn’t. “It performs great,” he says. 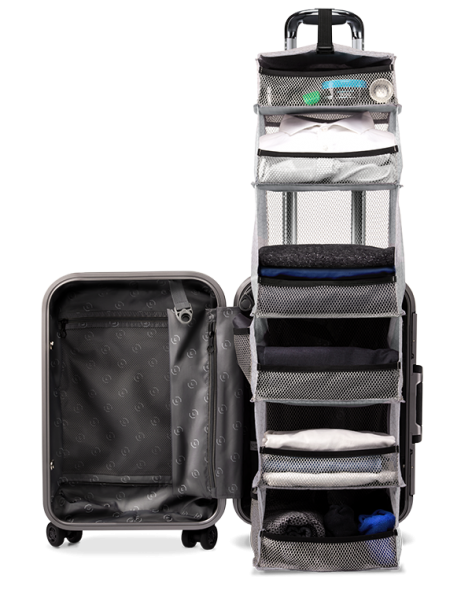 Just because it’s simple doesn’t mean it’s not smart. Consider the Lifepack Carry-on Closet ($249) by Solgaard, a hard-sided spinner with two innovations. This bag has no zippers; it closes like a traditional briefcase. It also includes a shelving system inside that expands and attaches to the handle. If you like to stay organized on the road, it’s a practical alternative to luggage cubes.

If you want something virtually indestructible, then give the Andiamo Classico ($299.99) a whirl. It’s made out of aircraft-grade aluminum and features the sturdiest wheels of any bag I tested. The inside is conventional, no-nonsense construction with standard compartments. But the ruggedness comes at a price: This is the heaviest of the new bags, at 10.4 pounds, and the black glossy exterior scuffs easily

You don’t have to give up all the gadgets with the new luggage. For example, Away offers choices that include a battery charger and comply with the new Federal Aviation Administration restrictions on lithium-ion batteries by being ejectable. Away combines some of the best features of soft- and hard-sided luggage. There’s a rugged exterior, but also a front pocket to store a 15-inch laptop or paperwork. It’s also a spinner, making it extra maneuverable. If you’re looking for something minimal but functional, this one’s a smart choice. 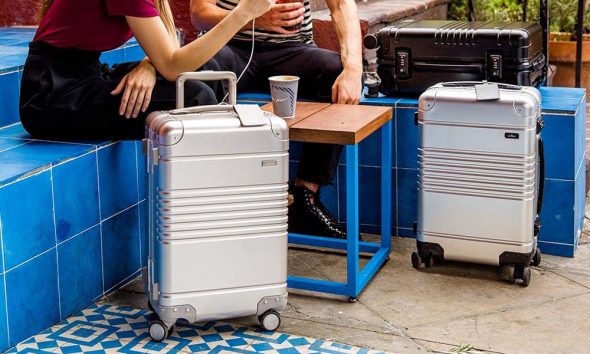 Larger budgets can look to Arlo Skye, a collaboration of Mayur Bhatnagar, a former retail executive at Louis Vuitton, and Denielle Wolfe, a former head of design at Tumi. Its new carry-on ($450) is a thoughtfully designed polycarbonate bag that’s flexible enough to accommodate a little extra. There’s an antimicrobial interior lining and ample space inside. It also has a removable battery for charging your wireless devices, including a USB-C port for your MacBook. If this had an exterior pocket for storing a computer or tablet, it would be the perfect carry-on bag.

Good luggage should do just one thing: protect your belongings. Bonus points if you can charge your wireless device or make a fashion statement. But this summer’s crop of new luggage tries to keep things simple. Nice.