Summer is steaming ahead toward a profitable season for travel and hospitality companies, according to recent surveys and numbers streaming in. Demand for Packages is swelling, a trend revealed in Marriott’s Summer Travel Trend Report 2017. Consumers are booking packaged rates 7% more frequently for their holiday weekend vacations than their non-holiday trips.

From Memorial Day through Labor Day weekend, American spending is expected to surpass $98 billion, according to a new travel report from Adobe Digital Insights (a travel report based on data from more than 16 billion visits to major travel, airline, hotel, car rental, and cruise sites). Summer travel spending in the U.S. will likely grow 5 percent this year with a year-end total for travel spending projected to hit $297 billion.

Higher Domestic Hotel Prices
U.S. hotel rates were up in March 2017 compared to March 2016. (7 percent versus 18 percent). The Adobe report found no correlations with the rise of home sharing rentals.

Sustainable Travel’s Surging Popularity
Social mentions of sustainable travel grew by 46 percent in January 2017. When it comes to U.S. travelers and ecotourism, the most popular months to travel are May, August, and September, and the most popular places to go are Costa Rica, Iceland, and Galapagos Islands.

Fewer International Travelers
The number of international travelers flying into the U.S. has been deceasing, not surprisingly. Numbers decreased 6 percent in the Q1 2017 compared to the same time last year. 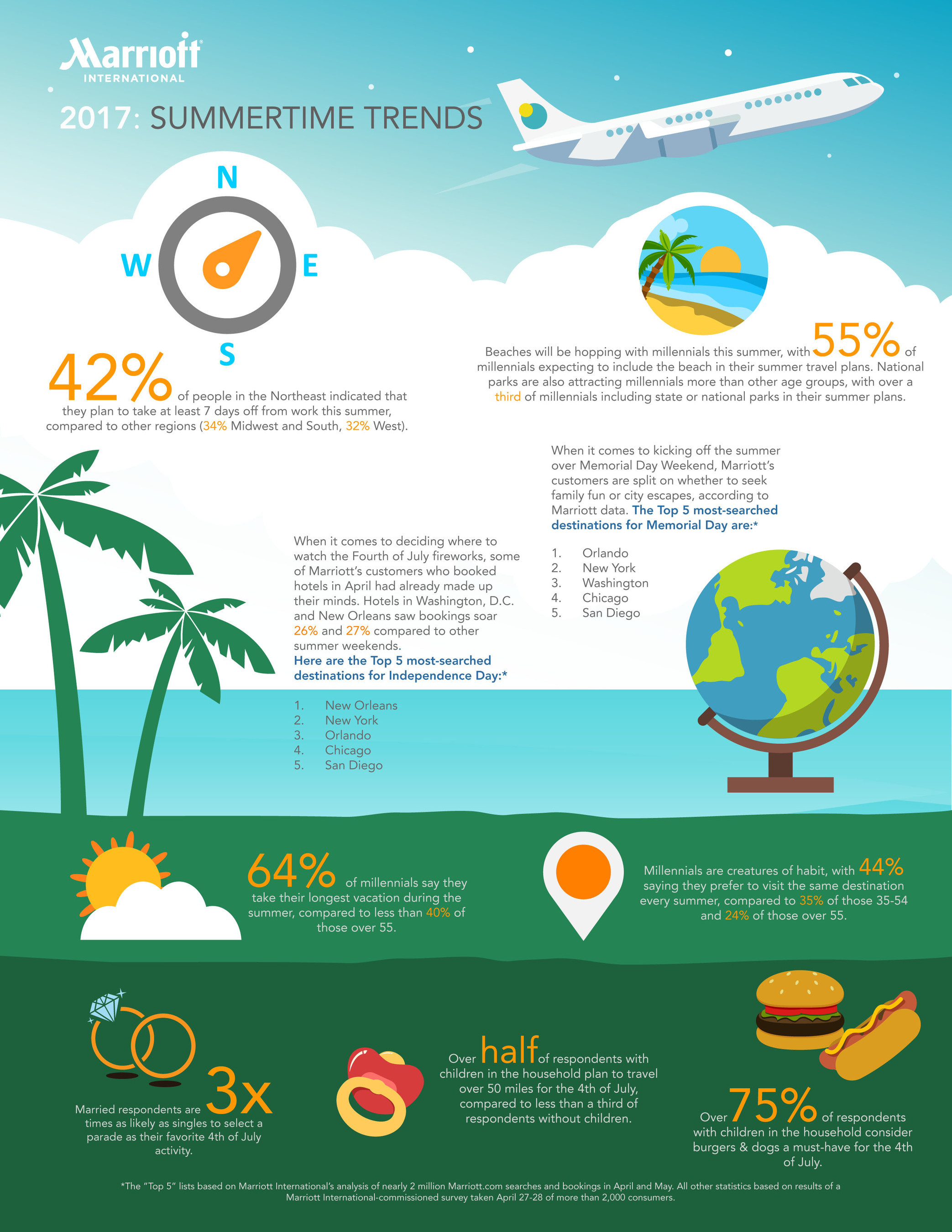 Meanwhile, according to Marriott’s data, travelers are looking beyond typical beach-centric destinations this summer and considering places like Orlando, New York, Chicago and New Orleans to explore with their families and friends.

Hotels in Washington, D.C. and New Orleans saw their share of bookings soar 26% and 27%, respectively, compared to other summer weekends.

The Top 5 most-searched destinations for Independence Day reflect a desire to celebrate in vibrant cities:

Marriott’s report also reveals significant growth outside U.S. borders on holiday weekends compared to other summer weekends. For both Memorial Day weekend and the July 4th weekend, travelers are targeting the Caribbean and Latin America, with bookings in hotels in Aruba, Puerto Rico, and the U.S. Virgin Islands seeing especially pronounced increases compared to other summer weekends.

Longer Holidays
Marriott sees summer holiday trips growing longer than last year. With July 4th falling on a Tuesday this year, Marriott’s bookings for five-day stays are soaring 67% over the 2016 holiday, when the nation’s birthday fell on a Monday.

More than a third of customers are booking three-to-five day stays for the Memorial Day and July 4th holidays, according to Marriott’s report. This represents an approximately 70% increase in longer-than-average stays compared to non-holiday summer weekends.

Demand for Packages
Another trend revealed in Marriott’s trend report is strong, continued interest in seeking out summer package deals that include items such as breakfast, parking or Wi-Fi, according to Marriott’s Summer Travel Trend Report 2017. Consumers booked package rates about 7% more often for their holiday weekend vacations than their non-holiday trips.

Travel with Pets
Regardless of their destination or length of stay, Marriott’s customers appear eager to bring pets with them on vacation, Marriott’s analysis shows. Marriott observed a 70% increase in searches for pet-friendly hotels during this summer’s holiday weekends versus non-holiday summer weekends. The timing of this summer’s holiday weekends and greater tendency to extend stays help explain the spike in pet accommodation requests.