Edie Bornstein Takes the Helm as President and COO, and Crystal Sets Sights on Far Horizons

In just a handful of months, Edie Bornstein will have completed her first year as Los Angeles-based Crystal Cruises’ new president and chief operating officer. As usual, she will be quite busy—for example, presenting Crystal’s case before travel agents at their numerous events (especially in source markets with upscale clients). “I love this brand and I think the team around me here has done an incredible job,” she says. “I think it’s clear that generally I’ve been brought aboard to evolve an already strong and profitable company and brand. So that’s what I’ve been doing,” she says.

Whether regaling agents at elegant venues on both coasts; or holding court for both agents and flocks of luxury travel media aboard the cruise line’s two swank vessels — the 1,070-passenger Crystal Serenity and the 922-passenger Crystal Symphony — Bornstein has amply shown her ability to lead and innovate at what is easily one of the world’s most exquisite cruise lines.

Appointed in October, 2013, she previously served as senior vice-president, sales and marketing, Azamara Club Cruises, Miami. Suffice it to say that Bornstein exudes the same boldness and self-confidence she did as Azamara’s sales lead–although she cautions against comparisons between the two lines.

Azamara is also a luxury brand, and does deploy two, roughly, 700-passenger ships, but “Azamara was always positioned as an up-market, up-and-coming brand, whereas Crystal is an established, ultra-luxury brand”—for one thing, it has larger ships of around 1,000-passenger capacities. 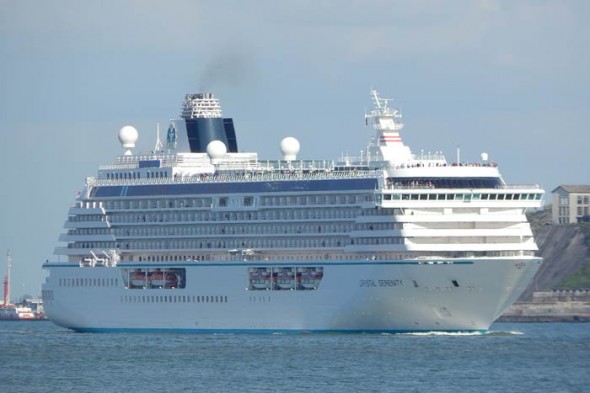 But Bornstein does acknowledge she was hired as CEO to give Crystal a more assertive public face. All the more so, she is passionate and extroverted about Crystal. Under her guidance some of the line’s standing marketing efforts, aimed at its loyal base of well-to-do guests, have really paid off.

For example, some time ago, the line broadened and extended its offerings of youth-friendly services in order to attract more multigenerational families and relatives as customers. Bornstein points out that, as a consequence, the average age of a Crystal passenger has steadily crept downward in the last several years. As early as 2010, it had dropped to 45-plus from the low- to mid-60s a few years before.

Another marketing innovation: Crystal Celebrations, which offers pre-packaged planning for weddings, reunions and other milestone events, whether held shipboard and shoreside. Crystal Celebrations is a tool, in this case, Bornstein points out, expressly designed to appeal to new, first-time cruisers.

Not long after Bornstein took the helm in October, 2013, that she had revealed her long-term vision for the line, a fleet expanded to “seven ships, sailing seven seas, seeing seven continents. At least that’s the initial concept,” she says. “I simply felt that as a mature, 24-year old brand, deploying two vessels, we can now grow both intelligently and profitably, although this is obviously a longer-term strategy.” Such growth, she says, would merely capitalize on the line’s extraordinary current success—especially since Spring, 2012, when its fares became more all-inclusive.

Among other things, this invariably led to, in 2014, the sellout of Crystal Serenity’s 108-day, around-the-world cruise in 2015. As the slots became occupied earlier this year, Bornstein explains, it became clear that travel agents could use more Crystal inventory, giving even more impetus to the vision of expansion.

Beyond that, however, the point of growth will be to enhance the onboard experience. Both a benefit and objective of the expansion will be to increase the breadth of itineraries offered to guests–since the plan is to utilize somewhat smaller ships more amenable to visiting more unusual and exotic destinations–without sacrificing what Bornstein terms “an adequate return on investment” for Crystal and its owners (Crystal is a wholly-owned subsidiary of the large Japanese shipping company Nippon Yusen Kaisha or NYK).

Whether the new additions arise and join the fleet as newbuilds or as acquired, in-service vessels, Bornstein acknowledges they will likely be of smaller capacity than the Crystal Serenity and the Crystal Symphony. Indeed, she says, the new fleet might comprise three sizes of craft: 1) expedition-sized ships; 2) new craft designed to carry about 700 guests; and 3) the existing Serenity and Symphony.

Even while Bornstein and Crystal set a course for expansion, of course, they’re keeping the Serenity and Symphony refreshed, having just completed a $17 million renovation of Serenity last fall. The work included a makeover of her penthouse suites and a massive repurposing/restyling of the Lido deck.

“Having taken on the awesome challenges I have,” says Bornstein, “all I can say is, well, what great challenges to have. Our 2015 world cruise is now sold out—nine months or so in advance; we have a stellar reputation in the travel industry and a hugely loyal customer base; we have ships refreshed and refashioned at least every two years. Obviously, the promise and reality of Crystal fit together so well, it’s hard to imagine a better place to promote growth.”