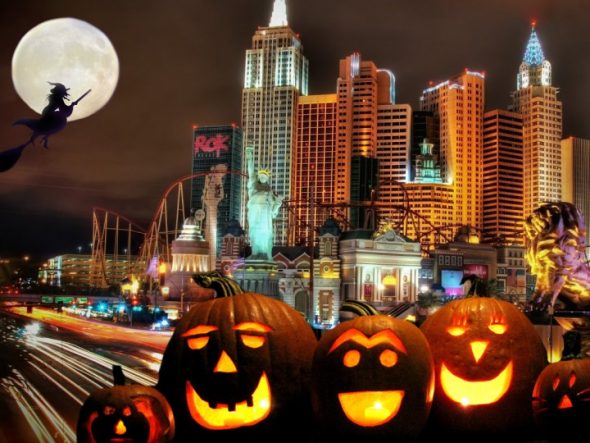 Las Vegas is not for the faint of heart, especially on Halloween. The city is defined by extremes – biggest hotels, hugest pools, tallest attractions and not surprisingly, scariest fright nights and the weirdest freak shows when it comes to All Hallows Eve.

Many of the hotels are getting in on the action by offering some comely scare tactics of their own.

The Adventuredome at Circus Circus Hotel, Casino & Theme Park is not a Halloween newcomer. It has perfected its Frightdome experience over the years that turns the five-acre theme park into a carnival of horrors. Find 25 rides and attractions there complemented by six seriously scary Haunted Houses, not 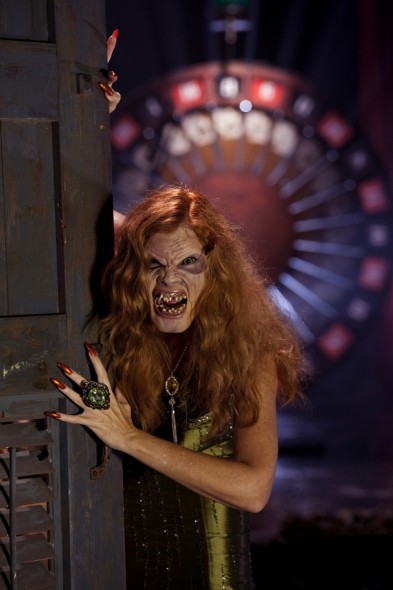 counting the a 4-D Panic House.

The Zombie Escape at The LINQ Promenade is the site of a zombie apocalypse, where the undead scare the living in a nightmarish realm. The Zombie Escape, open select nights until Oct. 31, is complete with blood-curdling sights, spine-tingling screams and delightful frights. In addition, The LINQ Promenade will host a spooktacular Halloween celebration Oct. 27-29 with décor, live music, zombies, drumline and costume contest. The High Roller Observation Wheel will cast a spirited glow over the entire spectacle, lit in Halloween colors.

Nightmares Beyond the Strip

Nightmares become reality at the Freakling Bros. Horror Shows’ “Trilogy of Terror” haunted houses, located west of the Strip near the Grand Flamingo Center at 4245 S Grand Canyon Dr. in Spring Valley. Find houses turned to mazes, basements and corridors of no return while exploring “Coven of 13,” “Castle Vampire,” “Gates of Hell” and “Freak Pass.” Not recommended for kids. The Gates of Hell house is R-rated. Admission starts at $35.

Fremont Street Experience will become a frightful destination for entertainment and Halloween mischief during its Rock of Horror-themed Fremont Fright Fest, a month long celebration of the spookiest time of year. Now through Oct. 31 guests can enjoy free nightly music and performances on all three Fremont Street stages, including the popular stage revue, “Frank & The Steins.” Daring guests can try to survive a new, interactive zombie apocalypse experience and on Oct. 31, the Rock of Horror Block Party will take over Fremont Street Experience, offering guests a ghoulishly great time.

The weekend of Oct. 28-29 events include a costume party, car show, parade, parties and more. Special guests knowledgeable in various scary topics will also be attending the event for a unique Q&A, including actors George P. Wilbur and James Winburn; Chuck Klenus and Bryan Williamson from the Nevada Paranormal Task Force and more.

Shopping mecca Town Square becomes Town SCARY on the evening of Oct. 31 with costume contests, the Undead Maze, carnival rides and other treats.

Monsters of the Deep

The annual Sea Monsters Revealed at Shark Reef Aquarium at Mandalay Bay Resort and Casino turns the world’s largest exhibition of sea creatures into an eerie display. Using plastination, guests are able to see the outside and inside of ocean inhabitants including an 18-foot, 3,000-pound whale shark, 15-foot-long mako shark and giant sunfish, and 18 other full-body creatures of the sea. The exhibit is open until Oct. 31.

Things That Go Bump in the Night

Those who do not fear the night can take in the thrilling nightlife with hair-raising DJs. Creative revelers donning costumes can win thousands of dollars in costume contests at various nightlife hot spots.

The Joint at Hard Rock Hotel & Casino will keeps freak show going with with the annual Fetish & Fantasy Halloween Ball on Oct. 29. It’s an annual adults-only horror extravaganza with plenty of wild and outlandish costume design as only could be imagined in Sin City. Find three huge rooms of raw, if not scary, humanity as performers mix with partygoers wearing anything that is allowed – and only sheer nudity is not. Latex, feathers welcomed. But dress up you must. Strict dress codes are in place and you’d better be wearing what they say. General admission: $88 plus “fees.” Runs 10:30pm to 4am. Arrivals after 1am and pay $49.50.

DJ Eric Dlux kicks-off Halloween weekend at TAO Nightclub at The Venetian with a costume contest, and one creative winner could pocket $5,000. The party continues with French Montana performing his top hits, Oct. 28-29.

The ghastly weekend lineup at Drai’s Nightclub at The Cromwell kicks off with Fetty Wrap featuring Monty, Future, 50 Cent with DJ Franzen and ends with T.I., Oct. 28-31.

Devils and angels, vixens and reynards, monsters, aliens and everything in between can party over 50 stories up, over-looking the glittering lights of the Vegas Strip at Heaven & Hell at Moon Nightclub at the Palms Las Vegas, Oct.29.

Take in Las Vegas’ most active paranormal sites after dusk on the Haunted Vegas Ghost Hunt. Using ghost-hunting equipment, the tour visits five locations known for their popularity among spirits from the other side, sinister and not.

A short distance from Las Vegas lies a forgotten and abandoned mining town known as Goodsprings. The Goodsprings Ghost Hunt transports the curious to the former city where deceased miners and murder victims tell their gruesome stories, leaving tour-participants sleeping with the lights on.

Jean Philippe Pâtisserie at Bellagio and ARIA Resort & Casino features 45 festive showpieces, made from cake, chocolate and other frighteningly delicious bites. The displays include a 200-pound, six-foot-tall zombie, a showgirl zombie and more.

LAVO Las Vegas at The Venetian will host a heaven and hell-themed party brunch with guests enjoying the indulgent brunch items, champagne and DJ with a Halloween twist.

This year’s scariest places can be found on this Top 13 List: