Think you’ve had a few bad trips lately? Listen to these unfortunate folks who entered Travel Guard’s “Unluckiest Traveler” contest last year. The promotion highlighted just what can go wrong while traveling and putting your head into vacation mode. The point underscored the fact that none of these events is ever expected – the perfect reason for taking insurance against the unexpected.

“The promotion was very successful in illustrating just why people need to get insured while they travel and just how helpful this small preventative measure can be,” says Jesper Tejsen Lykke, assistant Vice President of Sales at Travel Guard.

The winner of last year’s $10,000 grand prize was a woman who traveled to Fiji with her fiancé and turned that trip into a honeymoon. But the honeymoon became a bad moon for the duo as the new husband suddenly fell ill. He powered through the vacation until he simply could go no further – a point that came as they boarded a return flight to the US. After convincing the airline crew of the severity of the illness strike in order to deplane and then taking a wild cab ride to a clinic that was closed, a generous local citizen drove the pair to a city hospital where the groom learned his appendix had burst, but could now be attended properly. Battling further problems with a premature hospital check-out and a hard trip home, the wife, a frequent traveler, posted her travails on Travel Guard’s contest page and won the prize.

But other posts on the site and streaming through Twitter run from near-death tales of mis-diagnosed illnesses during foreign hospital stays, broken legs, wild animal attacks, undercooked weird meat attacks, robberies, natural disasters, adventure accidents … it is a list that is as endless as the potholes on the streets of Los Angeles.

Most of the writers say they did not carry travel insurance at the time but now they do not leave home without it. 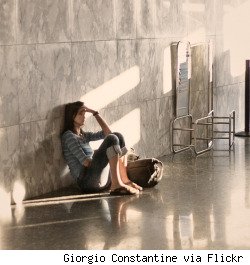 According to U.S. Travel Insurance Association (UStiA) findings,  one in eight U.S. adults (12 percent) has had their travel impacted in some way due to natural disasters or world events since summer 2010. And those statistics do not even begin to address the throngs of travelers who have been impacted by man-made disasters, accidents or health.

And of those travelers impacted by natural disasters or world events, only 29 percent had travel insurance, the survey revealed. Of those who did carry insurance there was a 96 percent satisfaction rate reported.

UStiA notes that altering travel plans due to unforeseen events such as storms, and other natural disasters and world events (consider the Iceland volcano in 2010, the Japan tsunami in 2011, the uprising in Egypt last year, and the sinking of the Costa Concordia in January) can cost travelers money for extra hotel stays, meals, and transportation.

Travel insurance can reimburse travelers for expenses when their trip is delayed or interrupted by unforeseen disasters.

The Association offers these questions for travel agents to ask their clients or for travelers to ask themselves: