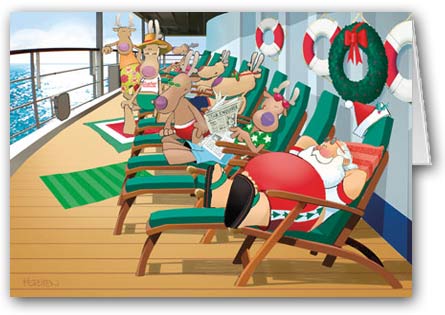 The holidays are a busy time for cruise lines, which bring out the decorations, pageantry and Christmas cheer for passengers spending the season sailing the open seas. An estimated 46.3 million Americans will be on the move this Christmas and many of them will moving from port to port as the holidays commence. According to Cruise Lines International Association (CLIA):

For those travelers looking for new adventures this holiday season, many CLIA member lines are turning their attention to more exotic ports of call to jump start traveler’s 2015 bucket list. Highlights include:

For those who wish to celebrate a European Christmas in festive elegance, Uniworld Boutique River Cruise’s River Beatric, takes guests on an 11- day river voyage through four countries – Austria, Germany, Hungary and Slovakia. Guests celebrate holiday musical heritage listening to the largest organ in Europe, sing “Silent Night” in Oberndorf (the birthplace of the Christmas carol), and spend Christmas Day in Salzburg enjoying a holiday lunch within the walls of St. Peter’s Abbey.

Windstar Cruises ships will sail to Southeast Asia, the Caribbean’s Windward Islands, and Panama. Guests can celebrate Christmas or Hanukkah while sailing from Singapore to Hong Kong on the line’s new ship Star Pride and visit Vietnam, to explore the ancient imperial temples and pagodas of Hue, ride bicycles down the back streets of old Hoi An, and enjoy the countryside.

Silversea Cruises’ new expedition vessel, Silver Discoverer, will spend the holidays cruising New Zealand’s Sub-Antarctic, with an itinerary in a remote area described by the United Nations’ Environment Program as “the most diverse and extensive of all Sub-Antarctic archipelagos.”

There may be no better way to kick off the new year than visiting off-the-map destinations.

Norwegian Cruise Line’s Pride of America will spend New Year’s Eve on the Big Island of Hawaii, with potential spottings of natural fireworks courtesy of Kilauea volcano. From December 27 to January 3, guests can soak up all four Hawaiian Islands including Honolulu, Hawaii; Kahului, Maui; Hilo, Hawaii; and Nawiliwili, Kauai.

Royal Caribbean International’s Mariner of the Seas makes its way to Asia for a unique and adventurous holiday celebration. Guests can enjoy a five-night Phuket & Malayasia cruise, including holiday-inspired menus created by Royal’s expert chefs and a stunning New Year’s celebration.

Carnival Cruise Lines Freedom will sail to the Caribbean for a family friendly holiday that begins on December 28. Families will not only enjoy festive holiday decorations and activities, but Carnival Freedom is the only ship in the fleet to feature the new, marine-themed Camp Ocean children’s facility, and a Dr. Seuss Bookville family reading venue for the younger set of travelers. Destinations include Aruba, Curacao, Grand Turk and La Romana, Dominican Republic.