If you were playing Monopoly® in London, Mayfair would be your Park Place. If you were putting an iconic department store on that square, it would undoubtedly be Selfridges. And if you wanted to feel confident and comfortable with your decisions all around, you might head to Selfridges for a session with Jayne Wallace, leading member of the Psychic Sisters, with a busy section of their own at Selfridges for shoppers and visitors who want to maximize their moves and plans.

Psychic Sisters has been based within Selfridges, London for more than 13 years. There are nearly two-dozen hand chosen practitioners available there, an attraction in itself for visitors to Mayfair. As of this summer, Psychic Sisters also has a home in West Los Angeles where Wallace works with top celebrities (Kate Hudson, Kylie Jenner, Janice Dickinson, Kim Kardashian and Diana Madison among them). At Selfridges in Mayfair, the shop has become an attraction of its own inside Selfridges and adds to the colorful history and offerings of the Hyde Park neighborhood.

All around Mayfair find a swirl of pre-war and post-war history that you can practically touch. The 70-odd streets that make up Mayfair offered a particular importance in the 20thcentury but road analyses trace the area to sites of the Roman conquest. In Edwardian times, London’s May Fair was held every year at Great Brookfield (now part of Curzon Street and Shepherd – and known as Shepherd’s Market).

A succession of earls and dukes, landed gentry and wealthy bankers took up residence there through the centuries as Mayfair evolved (with a special nod to Hugh Grosvenor, 1st Duke of Westminster who was pivotal in developing this section of London) and by the turn of the 20thcentury it Mayfair was eyed as prime real estate in the shadow of Buckingham Palace. Queen Elizabeth II was born there and spent her years of her childhood in Mayfair. Several European royal families lived in exile at the legendary Claridge’s Hotel during World War II. Alexander, Crown Prince of Yugoslavia was born there in 1945 (Prime Minister Winston Churchill’s supposedly then declared the suite to be Yugoslav territory). Nearby Grosvenor Square was the site of the former American naval headquarters, where Dwight D Eisenhower planned D-Day.

Hotels in Mayfair with History and Punch

A hotel central to the Mayfair experience is The Beaumont, which fits into that format as cozily as a zebra-skin rug on an Art Deco floor design. The 73-keys hotel opened in 2014 following an extensive redo that turned the circa 1926 car park and auto rental site into one of London’s most fashionable addresses. 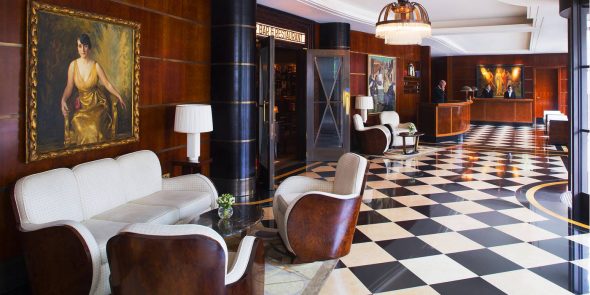 You’ll find The Beaumont on a quiet street in Mayfair that meets Selfridge’s on Oxford Street, and overlooks Brown Hart gardens. The property pays homage to a London of wealth and tradition — from the London of Agatha Christie spy novels and MI-5 intrigue to the London of art celebrations and Avant Garde theater.

Into this spirit, the design firm of ReardonSmith Architects created The Beaumont from an Art Deco-era garage and turned it into an intimate destination redolent with the style of a refined and casual 1920s establishment.

The Beaumont meshes with the mix of ages along Mayfair streets – from Gothic to Regency to Moderne to frontiers unspecified. The Beaumont’s exquisitely chiseled Art Deco details put the guest into the 1920s from the moment of arrival. Spaces flow in painstaking era recreation from the entrance hall to the bar, to the restaurant, to the concierge and reception, and staircase behind sweeping down to the spa and private dining room below. The Colony Grill Room and American bar, again, odes to pre-war times, provide their own sensorial settings.

Guestrooms are enriched by Art Deco features, from the design of the ceiling cornice in the bedrooms to the tone of the glass bathroom tiles and the traditional bronze light switches. Sliding timber-veneered doors draw across the bedroom spaces in most accommodations to create complete bedroom privacy from the bathroom, foyer, wardrobes and dressing room.

Classic room styles start at around $550 currently, with morning breakfast bar. The Beaumont is a member of the exclusive Kurtz-Ahlers collection, recently rebranded as Hidden Doorways.

Similarly, Grosvenor House Suites by Jumeirah Living casts a heady footprint across from the gardens of Hyde Park. The site of Grosvenor House bears some lengthy history of its own as it was the home of the Duke of Cumberland, followed by the Duke of Gloucester before it was purchased in 1805 by Robert Grosvenor, the 1st Marquis of Westminster, and became known as Grosvenor House.

The celebrated British architect Edwin Lutyens designed the building as seen today, as constructed between 1912 and 1918. As such, it was considered an icon of early 20th Century luxury in London and served as the London home of the Dukes of Westminster and their family until the Great War. Most recently, the property underwent a $100 million refurbishment in 2011, to become the Grosvenor House Suites by Jumeirah Living in April 2012.

Each suite, from the 122 studios to the five-bedroom Grosvenor Penthouse Suite, is a residence in its own right with British finishes in dark oaks and contemporary touches in tailored wall paneling and oversized stone bathrooms.

There are four spacious penthouses on the top floor, each with private balconies and butler service. The five-bedroom, 4,822 square foot Grosvenor Penthouse offers one of the largest serviced luxury accommodation options in London. It can sleep up to ten adults and five children (under 12) in five bedrooms. Then there is the study with a baby grand piano, the living room, the dining room that seats 14, the gourmet kitchen and breakfast room, the comfy media room and all the inviting balconies that provide the suite with a romantic view of the London skyline all the way to the Eye. The suite comes with the complimentary use of an Aston Martin.

Guests enjoy Asprey bathroom amenities and high-speed Wi-Fi internet access with the room. However, location has to be considered when it comes to what goes into choice. Guests are literally across the street from iconic and historic Hyde Park and Kensington Gardens, should a morning jog by the Peter Pan statue or Kew Palace be in order. The surrounding streets provide a treasure trove of cafes, bistros and ambient spots to grab coffee and pastries with seating indoors and out. Selfridges is just blocks away, with Harrods and bustling Knightsbridge some five minutes away by taxi. As for entertainment, the nightlife around Piccadilly is a 15-minute walk from the hotel.

Beyond location, history and stacked amenities and services, the Grosvenor House Suites by Jumeirah Living offers a series of immersive experiences that create highlighted moments in a London Stay. While a trip to Selfridges and a moment with Jayne Wallace is a must for amblers along these streets, the Grosvenor House Suites by Jumeirah Living offers a menu of what it calls “At Home” experiences, or bespoke opportunities created according to whims and wants of the guest. They might include a special perfume scenting session by an expert dispatched from a high-end perfumery, such as Jo Malone or Miller Harris. Or a personal shopping tour at Harrods with a special sampling of treatments from the new and quite cutting-edge Wellness Clinic at Harrods. One-on-one personal training sessions, yoga, even a catered dinner event can be arranged onsite. And, of course, a Psychic Sister date could be in the cards for the asking.

Rates for Grosvenor House Suites by Jumeirah Living start at $445.

A recommended treat for an immersive sense of place is the Mayfair walking tour by John Steele of Tour de Force in London (+44 (0) 7932 674 460;  [email protected]). A delightful few hours calls out all the ghosts, colorful histories, celebrity gossip and odd facts as can only be gathered in Mayfair.