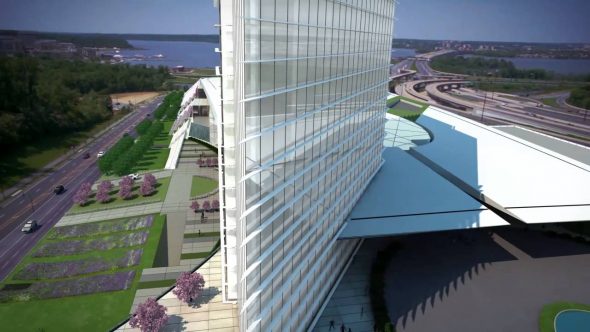 The MGM National Harbor is readying to become a shining property on the banks of the Potomac, just minutes from the nation’s power center in Washington D.C. and thousands of miles from anything that even hints of MGM Mirage Resorts in Las Vegas.

When it opens December 8, the $1.4 billion property it will have 308 rooms and suites, an array of eye-popping art amid gleaming white spaces that look more like the marble monuments surrounding than places for gaming, shows, entertainment and haute dining. And it will have something else: MGM branding that promises and delivers on top shelf experiences in the nation’s capital.

MGM National Harbor may be a sea-change for MGM as it combines interest in attracting a local market that is also an international market and sends its branding message far and wide. Just across the river from Old Town Alexandria, it will have two presidential suites in its collection, a dozen restaurants — including such names as José Andrés, Marcus Samuelsson, and Bryan and Michael Voltaggio, a 3,000-seat showroom theater, 27,000 sophisticated and light-infused spa, views of the Capitol and a stunning botanical conservatory larger than what one finds at Bellagio. And the 24-story hotel will have casino: more than 125,000 square feet of poker, a variety of table games and slots a-plenty jangling all night long.

The resort is accepting room reservations for stays beginning December 10 via mgmnationalharbor.com or (844) 646-6847. Nightly room rates start at $399 and suite rates begin at $599.