Belgium is an unlikely place for a lot of things: the headquarters for NATO, the highest taxes in the European Union, a royal palace bigger than Buckingham, and the most comic books per capita in the world. It was also the birthplace of an art movement that swept the world.

A little more than a hundred years ago, Art Nouveau was all the rage in Europe. Called Jugenstil in Germany, Secession in Austria or just “Modern Style”, it was all part of an international zeitgeist calling for the incorporation of natural forms into the home.

Brussels – the capital of Belgium – became the unlikely epicenter of the Art Nouveau movement thanks to a building boom fueled by the exploitative colonial adventures of the country under King Leopold II. 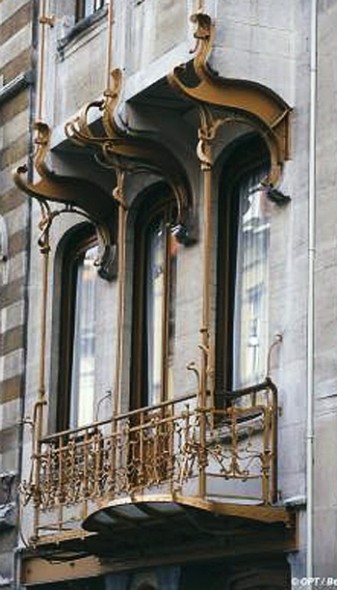 Even though the king himself didn’t like the style (he said it looked like “someone dropped spaghetti on a plate”) the new fashion quickly became all the rage. The first Art Nouveau house was built there in 1893, and there are more than 500 today still in use as homes, shops, restaurants and museums.

A visit to the city should include a stop at the Victor Horta Museum in the Saint-Gilles neighborhood. Once his home, this building on the Rue Américaine, built between 1898 and 1901, is both exemplar and museum. Constructed to house both his office and residence, it looks like two buildings from the outside. On the inside, his imagination took full flight with parquet floors bordered in mosaic, chandeliers that are bouquets of glass flowers, and carved details suggesting flames, flowing water and wild yellow iris. Examples of his trademark “whiplash” motif are everywhere.

Horta, born in Ghent in 1861, studied architecture under Alphonse Balat, the King’s architect. His first major commission — for the merchant Armand Solvay in 1894 — resulted in a home embodying all the design hallmarks of the short-lived style – the arabesque, floral and animal patterns, and the feminine silhouette. The residence on Avenue Louise, now owned by the Wittamer family and used for business purposes, is open for tours only by reservation.

The easiest way to see some of the Art Nouveau in Brussels is on foot. There are five itineraries on an online walking map: explore Schaerbeek, the Neighborhood of the Squares, Ixelles Ponds, the Louise Neighborhood or the historic center.

Brussels is a great town for walking, with an easy-to-use metro available for longer distances. In addition to the marvelous architecture, there’s great shopping and even better food.

There are wonderful restaurants seemingly around every corner in this most European of capitals. For a lunchtime jaunt,  wander over to Piazza Navarro, an Italian restaurant with outside tables opposite the Fondation Jacques Brel. Or reserve in advance for a seat at the coveted table in the kitchen of a Michelin three-star eatery, Comme Chez Sois. The food, of course, is magnificent but so is the setting. The white tiles on the wall are signed by luminaries who have had the pleasure — from Yehudi Menuhin to the Rolling Stones. 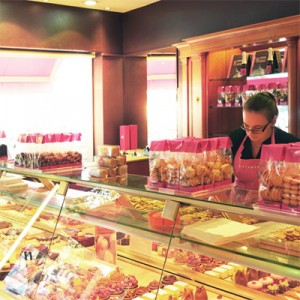 Then there’s the chocolate – Brussels is legendary for its handcrafted confections, and even boasts a Museum of Cocoa and Chocolate. It is not unknown that Belgium produces 172,000 tons of chocolate per year with more than 2,000 chocolate shops throughout the country so it will be hard to avoid a tasting or two.

Le Chocolatier Manon is famed for its bonbons — there are at least five dozen flavors for sale each day on rue du Congrès. Rhum Caramel, however, is also a perennial favorite.

Wittamer (the same people who now own the Solvay House) specializes in ganaches and pralines with a shop on Place du Grand-Sablon.

Then there’s Pierre Marcolini, who (according to his publicity) uses only cocoa beans he has personally selected. They’re roasted, crushed and ground in his Belgian atelier before being used to make exquisite (and exquisitely expensive) chocolates. He has several shops in Brussels, and the one on Avenue Louise (which looks more like a jewelry store than a candy shop) may be the most worthy to visit. Just one Violette or Java Fondant is enough to satisfy any craving.