Ever wonder what happened to those blacktop schoolyard bullies you used to know … once they passed voting age? Many of them matured to become your coworkers – or worse – your boss.

Most offenders fit one of six behavior categories, according to Mimi Hull of Hull & Associates, a corporate training company based in Maitland, Fla. Hull frequently speaks to members of the travel sector about handling difficult people in the workplace with advice that can be used both in and out the office.

As an employee, once you know what kind of an abuser you’re dealing with, there are some effective neutralizing tools you can use, she said

According to a survey released in February by the Workplace Bullying Institute, 20% of U.S. office workers have been bullied. More than one in four adults (27%) have directly experienced abusive conduct at work.

Hull described six types of workplace bullies and offered strategies for dealing with them.

“The goal here is to understand where that abusive person is coming from,” so you are empowered to make smart choices and take smart action. 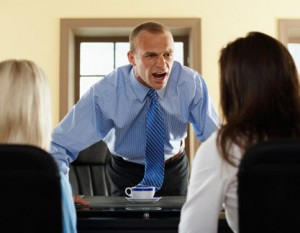 Volcanoes carry a lot of anger just below the surface, and their rage is out of proportion to what’s happening to them. When they explode the lava goes all over.

The solution: Let them vent, said Hull. “The trick is to listen, listen, listen.” Use empathic statements and repeat back their words in a calm way. “Say things like: ‘What I hear you saying is …’ and, ‘I understand how you might feel that way …

“Ask an angry person how you can help them and how you can work together for a common goal,” Hull advised

Whatever you do, don’t ask a volcano to calm down, and don’t call the person unreasonable.

Silent souls are turtles that retreat into their shells.

These personalities can turn into a volcano but most of the time the silence is more about processing than angry acts of shutting others out.

The solution: Give the Silent Soul time to think, said Hull.

If the questions are causing concern ask to set up another time to discuss things.

Refrain from asking yes and no questions. Rather than saying, “Did you do this?” ask, “How did we get into this situation?”

The solution: Respond with a question, such as, “What are you trying to tell me?” Body language should be open, not defensive.

Handling the attack head on will likely deter a future attack and the sniper will have to hunt for another victim.

These are people who dampen the enthusiasm of people around them. “No” is usually their first response.

Behind the irritability is a sense of feeling stuck, Hull said. They tend to think of themselves as realists and carry an unhappiness that is often unrelated to work.

The solution: “Keep conversations focused and related to work — don’t be an audience,” Hull advised. Pick out the facts and “then say you don’t agree with those facts. Resist fueling the flame. These interactions work like a virus. You find yourself suddenly agreeing and suddenly you’re infected.

Limiting time exposure to Crankypants types is critical, she added. And speak only about positive things when with them.

This persona is constantly complaining but does little to fix the problem. A Complainer may be pointing out a real problem but will be blaming everyone else for the cause.

“Complainers are not really looking for solutions,” said Hull. “They just want to complain.”

The solution: Listen attentively to what they are saying, otherwise they will add on layers. Do not agree or apologize. In fact, warned Hull, one should always be careful about for what one apologizes. “Tell Complainers you are sorry they feel that way — put things back on their shoulders. And ask them for solutions. Then ask about what is going right – refocus their attention.”

We all know these people. They love to hear themselves talk, added Hull. They don’t let you get a word in and if you do, they interrupt. They think highly of themselves and think their ideas are valuable to others. They generally mean well.

The solution: Bring them back to the topic. Body language matters here and Hull recommends standing up when talking with one – even if the conversation is taking place on the phone. It changes the response.

“If you stand up the conversation will be shorter. If one comes into your office, greet him or her by standing up. Start walking the Chatterbox to the edge of the hall or the door and, if possible, introduce this person to someone else.”

Here are five things to avoid when dealing with difficult people: