Colorado is hot. And this designation does not just describe the legal high times to be had ingesting fumes and chemicals from some of the world’s best cannibis leaves. Nor does it refer to mastering some of the highest peaks in the country on ski and snowboard, all to be celebrated at bragworthy après ski parties in the baselands. Hot here describes the water, the temperatures of the mineral waters flowing through geology under the Rockies and creating some of the most amazing hot springs vacations and experiences to be had in resort areas replete with heritage. 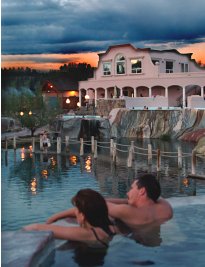 our history is dissolved in their water. Over billions of years, through mountain uplifts and collapse, volcanic activity and tectonic shifts, Colorado has been sculpted into a geographically distinct state with an abundance of natural springs.

Across the state some 27 hot springs offer a variety of experiences; including luxurious locations like Dunton Hot Springs and resort pools like Pagosa Springs. This collection of natural springs allow visitors to soak up Colorado’s history while steeping in its beauty.

Mt. Princeton Hot Springs: After profiting from Mary Murphy Mine, a group of miners built a hotel at what is now Mt. Princeton Hot Springs Resort. It took four years to build and never saw a paying customer. A fascinating and haunting place, nearby Iron City Campground has a cemetery where the dates of the deceased are accompanied by the brief story of their death.

Trimble Hot Springs:  Trimble Hot Springs dates back to 1000 – 1200 AD, when Ancestral Puebloans roamed the region. In 1874, Mr. Frank Trimble moved to town; suffering from rheumatism and old wounds, he bathed in the waters and declared himself healed just one month later. In 1882, he built the first hotel on the grounds.

Strawberry Park Hot Springs:  A balance of rugged and relaxed, Strawberry Hot Springs is much as it was hundreds of years ago. Native Americans and early settlers were drawn to the steamy waters and in the 1880’s the property around the springs was homesteaded. After a day of soaking, enjoy accommodations including a train caboose, covered wagon, tent or rustic cabin.

Wiesbaden Springs and Vapor Caves:  The hot springs and vapor caves have been flowing from the San Juan Mountains for thousands of years. In the winter, the geothermal water also heats the historic hotel. Ouray was named for the great Indian Chief, Ouray, of the Ute Tribe. The Uncompaghre River which flows through Ouray derives its name from the Ute vocabulary: “unca” for hot, “pah” for water and “gre” for springs.

Valley View Hot Springs: Valley View Hot Springs has a history as intricate and beautiful as the San Luis Valley it occupies. Founders Neil and Terry Seitz protected the springs, the legacy of the Everson Ranch, and surrounding ecosystem by creating the Orient Land Trust (OLT). Everson Ranch is a 150-year old ranch being renovated to maintain its historical facades and create an educational and living agricultural facility.

Eldorado Springs:  Described by many as the “Coney Island of the West,” Eldorado Springs Resort was first opened in 1905 and was owned in part by the Fowler family until 1983. Early visitors to the resort came by train or horseback — at that time advertised as the largest swimming pool in the country. Take some of this water home in El Dorado bottled water.