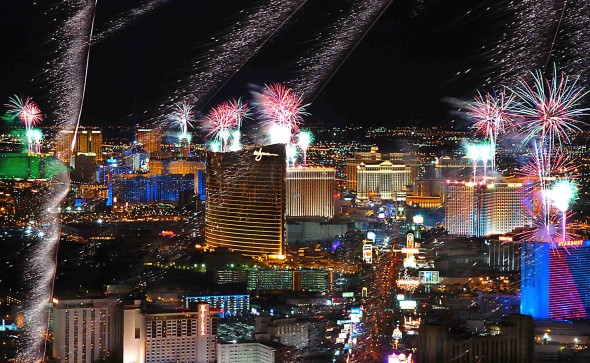 America’s Party in the Entertainment Capital of the World rings in 2014 with a Rockin’ Countdown, some over-the-top fireworks, A-list celebrities, plenty of sparkling wine and some boast-worthy concerts. Here is the run-down:

Las Vegas Events (LVE) and the Las Vegas Convention and Visitors Authority (LVCVA) are hosting America’s Party with a fireworks display produced by Grucci of New York. The 8-minute midnight show will explode more than 88,000 fireworks.

Bruno Mars takes the stage at The Cosmopolitan of Las Vegas at The Chelsea on Dec. 29 and 31 with the celebration beginning at 9 pm.

Britney Spears launches the premier of her show, “Piece of Me” at Planet Hollywood Resort & Casino Dec. 27, 28 and 30. Her New Year’s Eve show kicks off at 10 pm

The Fremont Street Experience will rock in 2014 with their Downtown Countdown New Year’s Eve celebration that takes place from 6 pm. to 2 am. This street party includes non-stop music from Blues Traveler, Loverboy and Vince Neil. The Downtown Countdown also includes a 2013 year-in-review retrospective on the Viva Vision screen.

The Smith Center for the Performing Arts will feature Kristen Chenoweth on Dec. 31 starting at 7:30 pm.

Tony Orlando and Wes Winters come together in the Grand Ballroom at South Point Hotel & Casino for a show beginning at 8 pm.

The Pointer Sisters will play at the Eastside Cannery for a special performance with doors opening at 8:30 pm.

Perched high above Las Vegas Boulevard, guests can lace up their ice skates for a winter treat on New Year’s Eve. The Ice Rink at Boulevard Pool at The Cosmopolitan of Las Vegas will feature a live stream of Bruno Mars’ concert from the new performance center, The Chelsea. Guests can also enjoy an open bar along with a spectacular view of the Strip’s midnight fireworks. Guests can hit the ice from 9 pm to 1 am.

Join the LVH for the “Legendary New Year’s Eve Extravaganza” that includes four separate parties, all with free admission to the public. Guests are encouraged to move from party to party and these include a classic rock band, two island-style bands and Top 40 music. The first party gets started at 8 pm in the Shimmer Cabaret.

Revelers cab ring in 2014 in style with a VIP package from Surrender Nightclub inside Encore at Wynn Las Vegas. Packages may also include a dinner tasting menu at the adjoining Asian dining hot spot Andrea’s. Kaskade will headline at XS Nightclub while Lil Jon will rock Tryst. Hakkasan, inside MGM Grand, welcomes Calvin Harris for the New Year’s Eve celebration in the main room while DJ Ross One turns tables in the Ling Ling Club.

It’s hors d’oeuvres from 9 pm to midnight with a premium open bar from 9 pm to 11 pm at Marquee inside The Cosmopolitan.

The Bank Nightclub at Bellagio will count down the end of 2013 with a live performance from Common. The two-hour open bar starts at 9 pm.

Hip-hop artist J. Cole performs at 1OAK inside The Mirage Hotel & Casino. Festivities kick off with an open bar at 9 pm.

Body English, inside the Hard Rock Hotel & Casino, hosts a night that starts at 9 pm with an open bar until 1 am. Guests can relive grunge rock, flannel shirts and ripped jeans with Empire Records’ “All 90’s Experience” at Vinyl beginning at 9 pm.

Sushi lovers can enjoy a six-course omakase menu at Sushi Roku Las Vegas at the Forum Shops at Caesars Palace. Reservations begin at 4 pm along with the offering of festival drinks like the Milk & Cookie and Once a Pama Time Cocktails.

Getting around the Strip is easy when you use The Las Vegas Monorail. While New Year’s Eve is one of the busiest times of the year and the famed boulevard is closed to automobile transportation, the monorail provides convenient connections to major Strip destinations for hassle-free transit, visitors can purchase a special three-day pass, valid Dec. 27 to Jan. 1. Riders should use the promo code NYE2013 when purchasing tickets at any Monorail customer service booth.