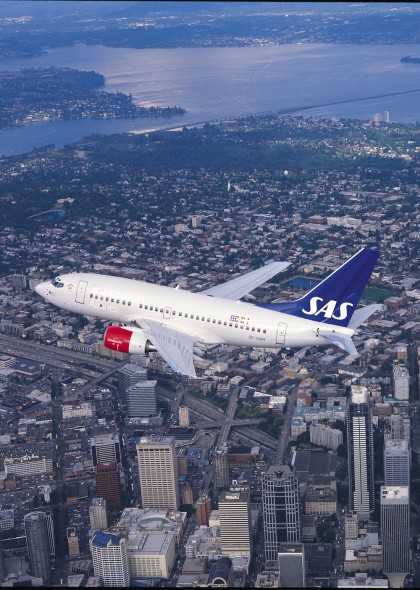 SAS launched its first flight from Stockholm to Los Angeles last month in a move that represents the Scandinavian airline’s fifth direct to from the U.S. and part of its major long distance investment strategy.
The route between Copenhagen and Boston will start up in the end of March and in September SAS will start operating to Miami from both Copenhagen and Oslo. Although SAS has been flying between San Francisco and Copenhagen since 2012, the LAX route is an important milestone for the airline.

SAS has a history with California. The first route between Scandinavia and Los Angeles started up back in 1954 – as the first airline ever to cross over the North Pole. Made possible through SAS’ own navigation technology, it flew a CD6B from Copenhagen to Long Beach and shortened the usual flying distance by some 1000 kilometers. Competitors did not catch up for at least five years, giving SAS an edge in those routes and allowing the airline to capture the interest of the film industry in their travels between the US and Europe.

“It means a lot to be able to re-introduce our historical route to Los Angeles. With the startup of the Stockholm Los Angeles route and daily departures, we are once again connecting two highly dynamic and innovative regions in the world,” says Rickard Gustafson, President and CEO at SAS.

The service is enhanced by new cabin designs and services. Departures on an Airbus A340 run daily from Stockholm Arlanda Airport with SK939 leaving at 9:50 AM and arriving in Los Angeles at 12:15 PM. Departures from Los Angeles run daily on SK940 at 2:15 PM, arriving at Arlanda at 10:00 AM.

Aircrafts operate three classes of service: SAS Go is the economy option with seats spread in a 2-4-2 configuration and seat pitches measuring 31 to 32 inches. SAS premium economy is called SAS Plus. Seats run 2-3-2 across and offer a generous 38-inch pitch. SAS Business keeps a spacious 1-2-1 configuration with 196-inch lie-flat seats (that include a massage feature and Hastens bedding). Entertainment screens through the aircraft measure from nine to 15 inches.

Those who choose SAS Plus receive some Business Class benefits: access to business class lounges throughout the route system and fast track security clearance.

“SAS probably has the best Business class offered between Europe and the US at the moment,” says Gustafson.

Scandinavian Airlines System launched its first flight from Stockholm to Los Angeles in March, after ceasing that route some 22 years ago. The new daily flight represents the Scandinavian airline’s fifth direct route to the U.S. from Scandinavia and is a firm part of its major long distance investment strategy. The carrier also flies from Scandinavia to New York, Washington DC, Chicago and San Francisco.

T-I: SAS used to fly to Los Angeles. Why did this route cease?

SAS: As you know we started in 1954 and we stopped in 1994 primarily due to low yield. The cabin factor was ok but it wasn’t making sense to make have routes we weren’t earning money on.

A couple of things have changed though. Since 1994 SAS has been going through some pretty heavy turn-arounds. We have cut costs and sold companies that did not now make sense to own anymore. And we have been able to establish conditions with unions that are a lot more flexible.

And it is fascinating to restart this route now because in 1954 the price for flying from Copenhagen to Los Angeles was around DKK 4,495 (around $674) and is now DKK 4,995 ($749). It’s amazing that we have been able to establish that price point. So we are able to offer a more cost effective product than we had even a half-century ago.

T-I:  What gateway cities in Europe will offer your non-stop flights to Los Angeles?

We plan to operate from Stockholm directly – we already have a passage from Copenhagen to San Francisco so it did not make sense to have same routes in both cities.

T-I:  You are cautiously expanding your reach into the U.S. Where and why?

SAS: We have nine daily departures from the U.S. – 2,500 seats every day. By end of year we will have one million seats annually flying from the US to Scandinavia.

We don’t think our approach and speed is cautious, we think we are pretty aggressive in opening up these long-haul routes. And we are offering these routes with newly re-designed aircraft. An investment of $3- or $4 billion US, so maybe this could be considered a cautious speed for a Middle East carrier but for a European carrier this is a really aggressive move in such a short time.

T-I:  You say you have invested in a total redesign of the cabin components in your flights serving the U.S. How so?

SAS: We are doing a total redesigned our aircraft into the U.S., and the cabin configurations are in a pretty good position versus our competitors. We’ve won prizes in the last year for the best changes in cabin designs compared to other European carriers. Our premium class customers are saying the business class product is matching the first class standards of other carriers. For the moment we think we have one of the best business class designs on board.

And many of these routes from the U.S. fly into Copenhagen – an airport that is quite a hassle-free and manages a lot of inter-European connecting routes. It is one of the best airports for connections and noted for low minimum connecting times.

As for the cabins: We have a three-service cabin structure: with Business Class as a 1-2-1 layout, with fully lie-flat seat beds — and it’s a large seat. We looked into Lufthansa for their business class seat designs but decided not to go with that one because it is too small, actually. We have totally new entertainment onboard, WiFi onboard and we have a very high satisfaction rate. Business Class is more or less full on every flight.

T-I:  What else should business flyers know about amenities and services at SAS?

SAS: We also have features on the ground such as the lounge and fast track benefit for premium passengers. Premium passengers use the business class lounges and have access to all Star Alliance lounges. Also, we offer hotel-style comfort onboard and work with Hastens for bedding and to offer that premium feeling. Then you have that Scandinavian touch for food and service. Food: we do have agreements with Noma (Copenhagen’s two-star Michelin restaurant that coined that concept of Nordic Cuisine and has consistently won billing as “Best Restaurant in the World,” by Restaurant magazine) for flights on our Asia routes, but not on U.S. routes at this time. The chefs so focus on offering a taste of Nordic cuisine though and we have agreements with Mikkeller microbrewery in Denmark to serve their beer.

T-I:  We know that Norwegian Air is growing fast and also offering non-stops from several US cities to Copenhagen, among other cities in Europe. It’s a low-cost airline but making waves. How is that company affecting what you are trying to do?

SAS: First I think Norwegian is a local’s carrier and not part of any network and it has had its challenges in the long-haul market, often missing when it comes to getting their customers back on time. It is not gaining a reputation as an airline you can really trust. So we are focusing on being trustworthy. Because we are part of Star Alliance, if something happens with our aircraft, then we are able to work with our Alliance members to rebook passengers on other flights. We are very focused on taking care of our customers.

Then, Norwegian Air focuses primarily on price as their key value. But if you add all the different services you need to buy onboard, such as entertainment, food, and sleeping amenities, it comes out to nearly the same. We have comparable prices at that point but all the extras are already included in our price.

Finally, there are the frequencies and they may fly only once a week into a long-haul destination. We have a large cargo business as well so we fly out frequently, often with a big belly full of fresh fish, to long-haul destinations that are expecting and need this cargo. So this business also supports our frequencies on these routes and really helps to support our yield. Dreamliners have a much, much smaller belly.

T-I:  What are some other considerations?

SAS: When we opened the Los Angeles route we opened for daily service. Boston will be daily and also Miami, so these factors address the frequent traveler and any traveler that needs flexibility. And our loyalty program also becomes a big differentiator as well. Miles earned on SAS can be used on all Star Alliance airlines.

T-I:  Do you see a growing demand for lift between the U.S. and Scandinavia?

SAS: There is demand and sometimes the routes we open create the demand. We started a Stockholm to Hong Kong flight in September of last year and since then demand has increased more than 50 percent from Scandinavia. So we find that when we introduce a new long-haul service into the market it actually serves to increase demand in that market.

We have been flying to San Francisco for a few years now and there was a lot of questioning, especially from the press, when Norwegian Air started flying into San Francisco, too. It was believed the new entrant would hurt our business and our market share. But it actually increased our bookings when Norwegian started flying. Perhaps it is because we are a totally different product than Norwegian. A low cost airline might land in New York, for example, at 11 pm and a connecting passenger might have to get a hotel for the night and this adds to the costs as well.

T-I: How are you marketing the route products to US business travelers?

SAS: All in all we are moving more into digital side of marketing through different channels. We work closely with travel agents and especially the TMCs and make sure they know everything they need to know and can communicate to their clients. But the fliers themselves do much of the work. We have a strong following for our business class product and the passengers are really our best marketers. They do a lot of sharing among travelers.

T-I:  What challenges do you see ahead for the airline?

SAS: Whatever the challenges, they are not affecting long-haul travel. The challenges we see are more local: heavy competition in Europe with heavy competition from local low-cost companies like Ryan and Norwegian, that are bringing so much inventory into Europe. But with the long-haul routes, these are doing very well for us now, especially with oil at current cost levels. We have been able to increase the availability of long-haul seats from Europe in this climate.