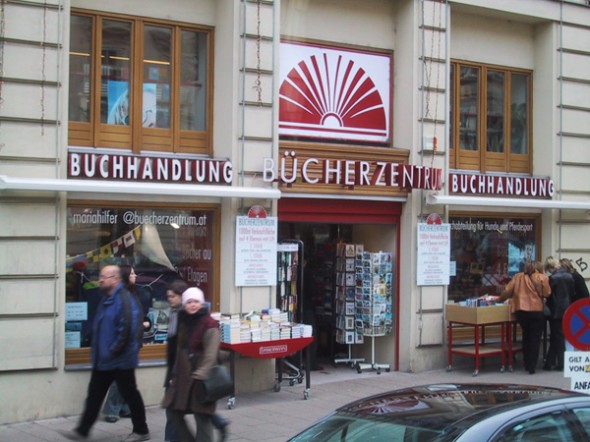 Schlagobers – the Austrian-German dialect for the mounds of whipped cream piled on a cup of coffee in a Weiner Kaffeehaus. That could be enough to drive anyone to Austria.

Coffee has been the life blood of Vienna ever since the Turks brought the dark, rich brew to this part of Europe. Well, actually, the Ottomans were bent on conquest, and left some roasted beans behind after their defeat in the 17th century — but, you might say the Austrians quickly figured out what to do with the booty (grind, brew and filter!) and café life was born. 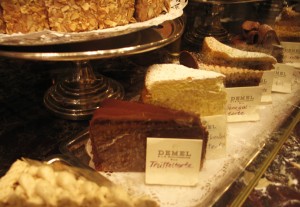 Coffee houses may be likened to living rooms in Austria. For less than 5 Euros, you can sip just one cup of coffee but have its accompanying glass of tap water refilled all day if you’d like. In every café, you’ll see people reading, writing, studying or just hanging out.

Traditional establishments, such as Café Diglas, Café Central and Café Prückel, offer piano music in the evenings and occasional social events like literary readings. Between March 1 and November 15, Kaffeehauses can get authorization from the government to set up chairs and tables on the sidewalk outside.

A stop in a Viennese café is a ritual of many a visit to the capital (both political and cultural) of Austria. One peruses the available newspapers (or brings one along), orders a coffee then sits and contemplates the future of the universe.

One can imagine that a traveler from Seattle experienced an epiphany in a Kaffeehaus that resulted in the now ubiquitous Starbucks chain. Yeah, there are actual Starbucks now in Vienna, but only the people who seek out McDonald’s restaurants in European capitals go there.

Once fortified, it’s off to see the city – and what a magnificent sight! A favorite area for visitors is the Museumsquartier, claimed as the tenth largest cultural area in the world by the Vienna Tourist  Board. It is about 15 acres in the middle of town stuffed with museums, cafés, shops, restaurants, bars, Baroque buildings and trendy modern architecture.

The Leopold Museum had to give up some of its Gustav Klimt artworks after a court case (seems they were stolen by the Nazis during World War II), but it’s still a top stop. The museum also owns 200 paintings, drawings and watercolors by Austrian expressionist Egon Schiele.

Across the courtyard, there’s the Museum of Modern Art that seems to claim an unusual specialty: Viennese Actionism, Austria’s “radical and essential contribution to the international development of avant-garde art.”
Not far away, find the Kunsthall Wien with its contemporary exhibitions. If tastes veer to something more traditional, make it a performance at the Spanish Riding School by the famed Lipizzaner stallions. The legendary Vienna Boys Choir resumes regular performances each September.

Speaking of music, one cannot forget Mozart. This Austrian composer and performer was born in Salzburg, but he spent most of his productive years in Vienna.

There are Mozart-centric events all the time in the city, from the Musikverein to the Konzerthaus, and a museum — Mozarthaus Vienna — is devoted to all things Mozart. It’s in an apartment the composer and his family lived in between 1784 and 1787.

During the summer, catch the city’s music film festival on Rathausplatz, held outdoors with the NeoGothic City Hall as a backdrop. There’s no charge for the shows, beginning every evening at twilight through early September, and you can bring or buy food and drink to enjoy while watching. 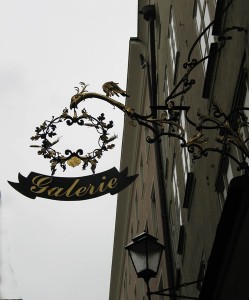 Finally, visit St. Stephen’s, a UNESCO World Cultural Heritage Site in the historic center of Vienna. Here you can experience the influence of the Hapsburgs most directly, by touring the Imperial Palace for example, or visiting the stables of the Lipizzaner horses.

Vienna is almost as far north and east as you can get in Austria, less than 38 miles from the Hungarian border. With a population of about 1.6 million in the metro area, Vienna is by far the largest city in Austria and one of Europe’s most concentrated cities for arts, music and intellectual culture.

Other travel articles by Susan McKee: