Carnival Cruise Lines is ushering in a new era on West Coast cruise departures with its newly expanded cruise terminal in Long Beach, now taking up the whole of the world’s largest geodesic structure.

Carnival’s Long Beach terminal has, in fact, been occupied by Carnival since 2003 – but for all these years it occupied only have the space, leaving the rest to be used by other concessions and studio enterprises. So, during those years, passengers waiting to check into their departing cruise were required to wait outside while passengers coming off the ship cleared the disembarkation process. But that is all in the past now that Carnival’s operation fills the entire 13-story, 146,000-square-foot space dedicated to creating a smooth sailing experience on both ends of a cruise. 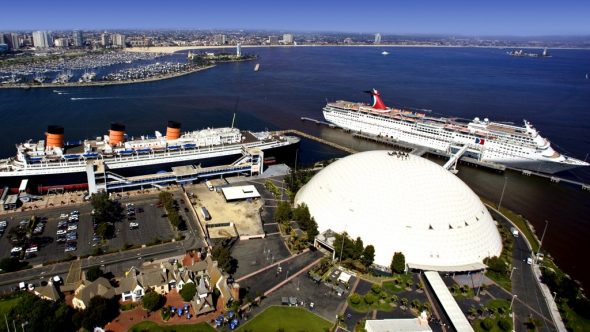 And while the new dedicated space means more ships, more departures and bigger sails opportunities for travel agents, there was much bigger news afoot at the grand reopening ceremonies. That’s because Carnival’s Cruise Lines CEO Christine Duffy announced plans for the new Carnival Panorama to the company’s West Coast fleet in Long beach, straight from Fincantieri’s Marghera shipyard in 2019.

There has not been a new ship based in Long Beach for 20 years and the new the 3,960-passenger Panorama is a Vista-class ship, which will make Carnival Cruise Line departures on the West Coast that much more popular.

The new Panorama cruise ship will include venues offering both indoor and al fresco experiences, including the Fahrenheit 555 steakhouse, Library Bar and Bonsai Sushi, along with such open-air attractions as the popular bike-ride-in-the-sky attraction SkyRide, a massive WaterWorks aqua park and the SportSquare recreation area.

A vibrant Havana section will present tropics-inspired staterooms and its own Cuban-themed bar and pool, Family Harbor, featuring extra-roomy accommodations, the Family Harbor Lounge and Ocean Plaza, a spacious dining and entertainment venue with indoor and outdoor seating. Other innovations to be found only on the Carnival Panorama will be announced in the near future.

The 133,500-ton Panorama will take the place of the 113,300-ton Carnival Splendor and sail on seven-night cruises to Mexico. The Splendor will then head across the Pacific to be based in Sydney, Australia. 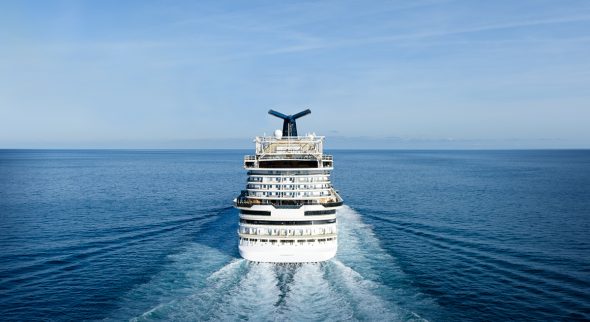 “There is a significant population within a half-day or less of this terminal location and we are giving agents the support they need to sell it,” said Duffy. “It’s nice to be able to drive to your cruise vacation.”

The first ship in the Vista class, Carnival Vista, launched in 2016 to be followed by sister ship, Carnival Horizon, which is expected to debut in April.

Currently, Carnival’s Inspiration, Imagination and Splendor run three- to 14-day sailings down the coast of California to the Mexican Riviera. The Splendor, which marked the reopening occasion with a return to the Long Beach homeport from its former position in Miami, now calls on Cabo San Lucas and Puerto Vallarta in seven-day sailings.

The Inspiration and Imagination run from Long Beach to Catalina Island and onto Ensenada, in three- and four-night sailings. Carnival carries some 600,000 passengers on 250 sailings a year from Long Beach, mostly to points on the Pacific coast of Mexico.

The Long Beach Terminal is, in itself, an attraction. While it is now decorated with scenic nature murals and park-like waiting areas, the historic geodesic dome has a bit of a history of its own. It was built in 1983 to contain Howard Hughes’ Spruce Goose seaplane. The outsized plane, built and flown by Hughes in 1947, become a tourist attraction housed under the dome until 1992, when it was moved to an aviation museum in Oregon.

At that time the dome was, and still is, the world’s largest freestanding structure. A miniature Spruce Goose, used as a set model in the 2004 film, “The Aviator,” suspends over the passenger registration area. The terminal has also been a soundstage for such films as “Batman Forever,” “Last Action Hero,” and “Pirates of the Caribbean,” among others.

The newly expanded terminal is one of 13 year-round homeports Carnival operates. Carnival’s seasonal homeport of Ensenada will be receiving a serious inside and outside upgrade as well, in the hopes of sparking more interest for Mexico sailings. It will have a much-expanded interior flow and also offer inviting markets and shopping for passengers who want to experience Mexico but not wander far from the ship. Target completion date is 2020.

“Ensenada is a clean, safe, foodie destination these days, but it is missing that shoreside component of the ship experience that is needed to grow the demand and become a destination — not just for three- and four-night sailings, but for grander itineraries,” said Carlos Torres de Navarra, Carnival’s vice president of commercial port operations. Further details on those plans, he said, would be forth coming.

“This is a momentous occasion for both Carnival and the City of Long Beach – not only are we celebrating the grand re-opening of this magnificent cruise terminal, but also demonstrating our commitment to the West Coast with the deployment of the spectacular new Carnival Panorama in 2019 and the announcement of an exciting new port development project in Ensenada,” added Duffy. “The West Coast is an important market with vast growth potential and these initiatives further demonstrate the confidence in our future success in Long Beach. We are very much looking forward to having Carnival Panorama homeported here beginning next year.”