In a kind of “move over Mona” moment the Louvre Abu Dhabi opened with much fanfare this week to put Abu Dhabi on the world cultural map and put focus on artistic treasures that extend far beyond the bounds of Mona Lisa’s mysterious smile.

The Louvre Abu Dhabi on Saadiyat Island, just across the bridge from the bustling desert city of steel and glass, offers an unusual peace in this region, where visitors are surrounded by arts of the ages, ancient and current, wherever they rest their eyes. 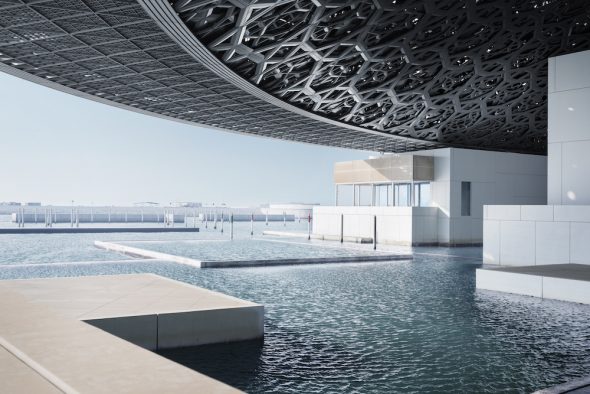 Impressive in its own right is the museum itself, an iconic masterpiece designed by Pritzker-prize winning architect Jean Nouvel. Seeking inspiration for the concept of Louvre Abu Dhabi he found it in traditional Arabic architectural culture, and designed Louvre Abu Dhabi as a “museum city” in the sea nodding to the classic medina abutting low-lying Arab settlements. In total, 55 individual but connected buildings, including 26 galleries, make up this museum city.

But the centerpiece of the design is a vast dome some 2000 square feet in diameter, covers the majority of the museum city. This impressive structure is visible from the sea, the surrounding areas and Abu Dhabi city center.

Under the dome, the shaded effect is one of a cinematic “Rain of Light” as the sun’s path progresses throughout the day. At night, it forms 7,850 stars visible from both inside and out.

Adding to the quality of light in the museum are 17 glass ceilings within the museum galleries, each made from 18 different types of glass panels that allow for the fusion of both natural and artificial lighting to provide an optimal optics for the artworks on display.

“It’s a place of convergence and correlation between the immense sky, the sea-horizon and the territory of the desert. The dome and cupola imprint the space with the consciousness of time and of the moment through an evocative light of a spirituality,” says Nouvel.

All the Light You Cannot See 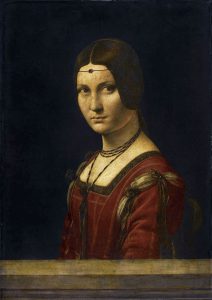 Presented across 68,000 square feet of galleries, the museum’s growing collection includes more than 600 important artworks and artifacts. Half of these significant works are on loan from 13 leading French museums for this inaugural year and include masterpieces representing civilizations and artistic movements from significant moments in global human history: ancient Egypt, the Roman Empire, ancient Chinese dynasties, the Kingdom of Benin in present-day Nigeria, the Renaissance, the Impressionists and the Modernists. However, the work that garnered the most attention at the opening was Leonardo da Vinci’s seminal work “La Belle Ferronnière,” on loan from musée du Louvre.

French museum partners will lend artworks to Louvre Abu Dhabi for a period of 10 years, decreasing over time as the permanent collection grows.

At opening, 235 works from Louvre Abu Dhabi’s own collection are displayed in the galleries.

The succession of rooms at the Louvre Abu Dhabi has become its own narrative. After a prologue of masterpieces from multiple periods of time, the architecture animates this narrative as visitors wander through collections and centuries. Ancient masterpieces include a Bactrian Princess created in Central Asia at the end of the 3rd millennium BCE, a Grecian sphinx from the 6th century BCE and an Iranian gold bracelet in the shape of a lion. Visitors encounter works from universal religions, including sacred texts such as a Leaf from the “Blue Quran” and a Gothic Bible, as well as a Standing Bodhisattva from the 2nd or 3rd century and a white marble Head of Buddha from China. 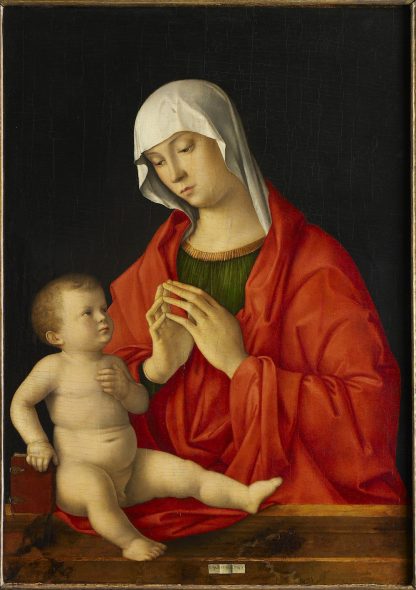 Highlights from later periods include an ancient astrolabe, part of a display showing the science of cosmography; a red Chinese lacquer chest of drawers produced in France by Bernard II van Risenburgh, which shows the cross- cultural inspirations born from global trade routes; and Giovanni Bellini’s Madonna and Child, representing the emergence of religious art and iconography.

Works such as a Bronze Oba head from the Benin Kingdom and Jacob Jordaens’ The Good Samaritan demonstrate the magnificence of royal courts around the world. 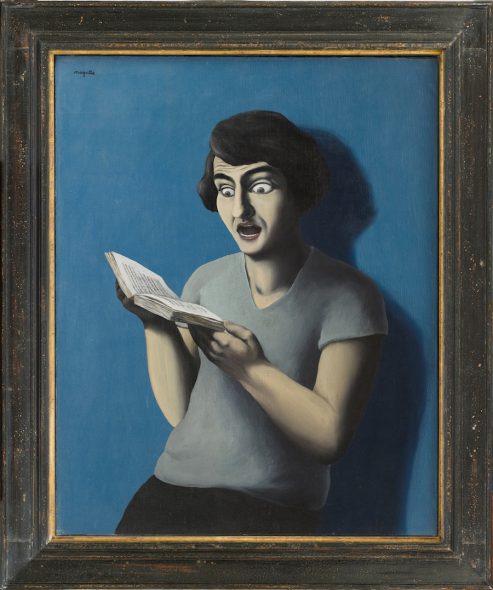 The museum’s contemporary art collection has nine canvases by Cy Twombly and a monumental sculpture by renowned international artist Ai Weiwei. As part of an ongoing program, Jenny Holzer and Giuseppe Penone have created monumental site-specific installations, exhibited under the dome in open air and embedded in Louvre Abu Dhabi’s architecture.

Island of Art and Culture

The museum is the first anchor in what will be an arts and culture destination island in the U.A.E. called Saadiyat Island, and create a nucleus for global culture with unique exhibitions, permanent collections, productions and performances. The Louvre will soon share the island with Guggenheim Abu Dhabi and the Zayed National Museum, and both will contribute their own imprints in riveting architectural feats and world-class collections.

Tickets to the museum cost 60 AED (around $16) for general admission, free entry for children under 13 years, journalists and visitors with special needs as well as their companion.

A variety of guided walking tours and thematic tours are available with guides and on audio in several languages. There is also a child-friendly tour, “A First Look at Louvre Abu Dhabi.” 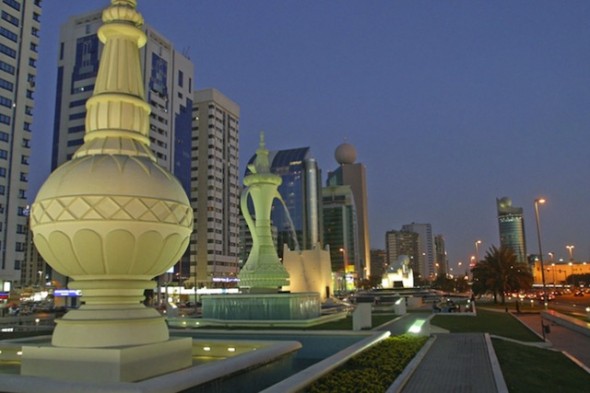 A Short History of the UAE

Archaeological finds suggest a long history of human settlement in the region. In fact, there is evidence that people have lived here for over 100,000 years. Human settlement probably began in the Paleolithic period with early Bedouin nomads travelling through the region.

For thousands of years, the local Bedouin tribes lived on varied terrain between the sea for fishing and the desert where they farmed camels and dates at the oases.

Evidence from the late Bronze and Iron age settlements shows that around 3000 BCE, many previously nomadic tribes began to settle and turn primarily to farming and trading to survive. They developed agricultural and irrigation systems, such as the falaj, and by the 7th century, established trade routes had emerged.

Many routes, including the famous Silk Road, connected the Arabian Peninsula with Asia and Europe, and were hugely influential in the region’s development.

The main route across Arabia — the Incense Route — brought precious products from the very south of the Arabian Peninsula, along the Red Sea coast and across the Sinai desert to Egypt, where they were shipped to destinations across the Mediterranean Sea.

For 7,000 years, fishing for pearl oysters had been the main source of economic activity in the region. The Incense Routes introduced new prosperity. The trade routes were mostly controlled by the Arabs who brought frankincense and myrrh by camel caravan from the south to trade with India, Africa and East Asia. Luxuries including exotic spices, precious stones, ebony, fine textiles such as carpets and silk, rare woods, feathers, animal skins and gold were traded back and forth, with taxes and fees adding to the profit.

Demand for foreign goods was increasing in emerging centers for Islamic civilization, such as Baghdad. Julfar, in Ras Al Khaimah, became a wealthy port, home to great wooden dhows that sailed the Indian Ocean.

Alongside trade goods, these routes were channels for culture and communication. Exchange with civilizations like the Greeks, Romans and Persians introduced artistic and cultural changes. These ideas and influences can still be seen in the art, design and cuisine of the UAE.

By 1515, the Portuguese had occupied Julfar, and a fierce rivalry emerged between European nations who hoped to control the flourishing trade between the Gulf, India and the Far East. By the middle of the 17th century, the British dominated the area known as the “Pirate Coast” due to the constant harassment of ships carrying tempting valuable cargo.

From 1820, the British signed a series of peace treaties with the nine Arab Sheikhdoms in an attempt to stop the piracy. In 1853, they agreed to a permanent maritime truce and a close, ongoing diplomatic relationship was established between Britain and the emirates.

Throughout the first half of the 20th century, the emirates — at the time called the Trucial States — were suffering from the dramatic decline in the pearling industry, worsened by World War II. Abu Dhabi was a subsistence economy made up of small fishing villages, pearling, camel herding and farming in the oases. The dominant tribe, the Bani Yas, maintained an uneasy peace but diminishing resources caused unrest and inter-tribal troubles in the emirate’s interior.

Oil exploration began in 1939. The first find was under an old pearling bed in 1958, with more desert reserve discoveries to follow. Abu Dhabi exported its first crude oil cargo in 1962. By the end of the decade, the British had announced their intention to withdraw from the region, and efforts to unify the nation began in earnest, driven by Sheikh Zayed bin Sultan Al Nahyan, Ruler of Abu Dhabi, and Sheikh Rashid bin Saeed Al Maktoum, Ruler of Dubai.

Sheikh Zayed bin Sultan Al Nahyan became Ruler of Abu Dhabi in 1966 and recognized that the wealth generated by oil had the potential to transform the fortunes of Abu Dhabi and the Emirates. Together with Sheikh Rashid bin Saeed Al Maktoum of Dubai, a federation of the Trucial States came to fruition in 1971 with the founding of the United Arab Emirates. Sheikh Zayed held his post as President of the UAE for the next 38 years, remembered now as the UAE’s founding father.