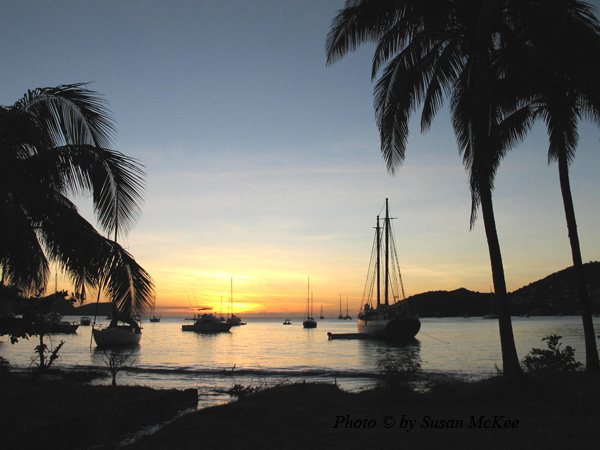 “Hold the wheel steady!” yelled Frank Dregallo as he leapt over the ship’s railing and ran to the bow. I held the wheel and Tim scrambled after our captain. On just the second day of our weeklong sailing school, catastrophe loomed.

Our chartered yacht was under full sail that blustery September afternoon as the jib wrenched itself loose from the halyard at the top of the mast and plunged toward the choppy water.

Working in tandem, Tim and Frank successfully wrestled the huge, flapping canvas triangle back onto the deck before the trailing edge, already drenched, could be dragged under the keel. If it had become tangled up in the propeller blades, Frank explained later, we would have lost not only one of our two sails, but our motor as well.

Welcome to the wonderful world of sailing!

When I signed up for the seafaring excursion, the organizers assured me that “hands-on” was the best way to experience the Caribbean. However, sailing from island to island takes on a whole new meaning when you’re the one at the helm.

This landlubber took the plunge in St. Vincent and the Grenadines on a 45-foot boat called Silk Pajamas with Frank, an experienced captain and sailing instructor from Maine, and two other neophytes – Tim (who sailed a Sunfish in his teens) and Suzanne (a scuba diver). The idea was for the three of us to return to dry land a week later with a Basic Keelboat certificate from the American Sailing Association in hand.

The brochure implied a combination of book-learning and real-world sailing in an idyllic region of sun-kissed turquoise waters. There’d be plenty of time for swimming and snorkeling during the days. Before nights spent in blissful sleep in individual cabins on the boat, we’d have cocktails and dinner in elegant on-shore restaurants.

Well, yeah, all that was true. But the whole experience taught me that in the grand scheme of humanity there are sailors and then there are passengers. Tim, Suzanne and Frank had both feet planted firmly on the deck. Me? Well, I’ll have somebody else do the actual work of the sailing in the future, thank you very much.

The almost-catastrophe of the wayward jib wasn’t our only crisis (I haven’t even mentioned the jerry rigged solution Frank cobbled together so we could continue on our route).

Later in the voyage, I was napping below decks while we were at anchor in a peaceful cove when something huge crashed into our starboard side. The next sound was Frank diving over the stern. Seems that a catamaran had worked its way loose from its moorings and sideswiped us on its way out to sea.

Frank swam out to chase it, clambered aboard, and managed to get the catamaran’s motor started before the huge boat hit anything else. As he was steering it back to its mooring, the owners (evidently French) were frantically rowing from shore to see what had happened to their boat. His reward for the save? A really nice bottle of wine!

Before we arrived on St. Vincent, we had all received copies of “Sailing Fundamentals” by Gary Jobson – the “official learn-to-sail manual of the American Sailing Association and the United States Coast Guard Auxiliary.” It made for fascinating reading on dry land and a stiff learning curve while under sail.

By the second day, I could use a winch to raise the halyards (the lines used to hoist sails and hold them up), tie a bowline knot and start the motor. Holding 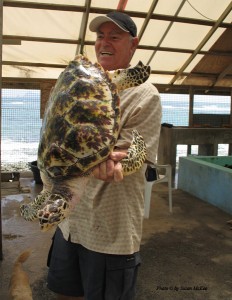 the wheel, I could keep the boat on course – more or less – and was learning what each of the sails did (we had a mainsail and a jib.) Then things got complicated.

Both Tim and Suzanne were deep into the lessons, peppering Frank with questions. I decided I preferred to take notes and photographs to actually doing the tacking and jibing myself.

Around me were all the clichés – except this time they were attached to their sources. Keeping things on an even keel, cutting it close, taking the wrong tack, cutting [the sail] some slack, holding course, splitting the distance, all hands on deck and shipshape – these phrases take on new meaning when there actually is a keel, and taking the wrong tack sends the boat where you don’t want it to go.

St. Vincent and the Grenadines aren’t the most accessible in the Caribbean. The almost three dozen islands in the nation are strung across 40 miles of sea just west of Barbados, south of St. Lucia and north of Trinidad and Tobago.

The last stronghold of the Carib Indians and the last of the islands in the region to be colonized by the Europeans, St. Vincent (the largest) was first settled in 1635 by Africans who had survived the sinking of a Dutch slave ship. The nation gained independence from Great Britain in 1979, but remains within the British Commonwealth.

Mustique is probably the best known because it’s owned by a company that strictly controls access, making it an attractive destination for celebs. Vessels carrying more than 25 passengers are banned, for example, and press photography is forbidden.

We had a delightful evening at Basil Charles’ restaurant (where Mick Jagger still is a regular). There’s only one hotel on the island, and one four-room guesthouse  – but 56 villas are available for rental from the Mustique Company.

Bequia is a rowdier atmosphere, with fabled beaches, restaurants, bars and places to stay on shore. One of the must-see attractions is Oldhegg Turtle Sanctuary, where a retired fisherman named Orion King runs a nursery and rehab center for his favorite species of sea turtle.

Other destinations are lower key, and the activities center on swimming, snorkeling and sunbathing with occasional hikes and other shore excursions.

At the end of the trip, Tim and Suzanne passed their exams with flying colors (another sailing cliché). I had a notebook and camera filled with sun-drenched memories. All of us gratefully returned to our everyday lives. 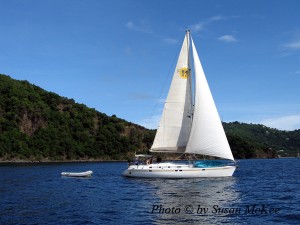 St. Vincent and the Grenadines

S.V. Illusion in the Grenadines and Eastern Caribbean