Airline Travel with a pet has been a topic of serious conversation for years, even before headlines broadcast an avoidable tragedy involving a pet death aboard a recent United Airlines flight. In that misfortune, a flight attendant ordered the passenger to put her pet carrier in the overhead bin aboard a Houston-to-New York flight. She claimed she didn’t know there was a dog inside.

The airline company had already been in the news for its otherwise lax rules about allowing emotional support pets onboard when a passenger attempted to bring a peacock aboard a flight. Delta Airlines, too, received heat in recent months over the support animal policy that allows calming pets to ride in the cabin with their owners. In one case, a dog got out of its carrier and mauled a man on a flight to San Diego. Passengers have reported incidents of barking, urinating, defecation, growling and other annoyances on flights. Some passengers have allergies, and many owners have intolerances for intolerances. 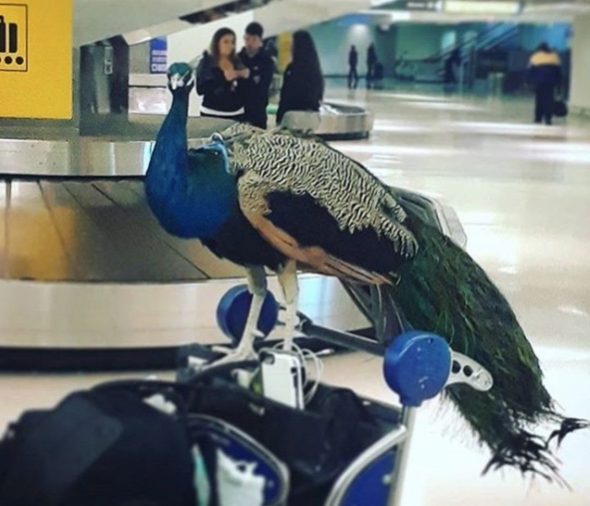 As a result, the airlines are cracking down again and owners may have to make tough choices between putting the pet in the cargo hold where pet deaths are more common, or parting with their animal pals and leaving them at home.

This issue stems from a 1986 anti-discrimination law protecting handicapped air travelers. The law ensured physically disabled people could travel with their service animals. But then, not all disabilities are easy to spot. Nervous travelers, autistic children, a number of disturbed but mobile passengers claimed good reason to bring their pets along for the ride. A service animal certification that could be purchased online, plus a carryon container and a small fee (usually $125) and it was game on for flying with Fido. 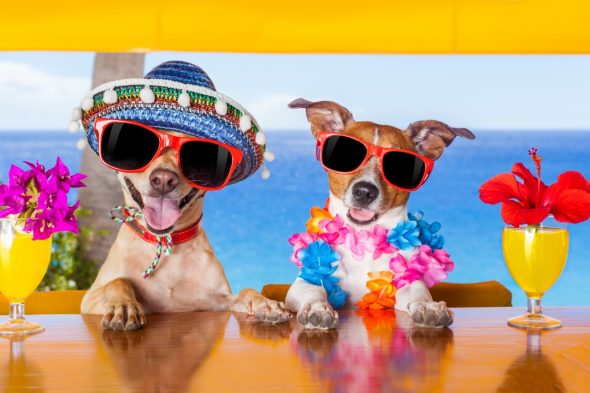 Today, those policies vary by airline and all have their own rules and restrictions that depend on circumstances that may change based on the news of the day. Here is a general breakdown, according to AirlineGeeks.com compiled following the United Airlines tragedy.

Alaska Airlines: Pets can board with owners as long as kennels and pet carriers meet the standards listed on Alaska’s website. Best to call the airline as restrictions apply due to type of plane and cities. Although the airline offers liberal policies on types of animals allowed it restricts certain breeds of cats and dogs due to allergy concerns. The fee to fly with a pet is $100, cabin or cargo hold.

Allegiant Air: The ultra-low-cost carrier allows domesticated cats and dogs and only allows pets to be carried on the plane and kept in the cabin, not checked into the cargo hold. The fee is $100. The airline’s pet travel policy online does not contain many specifics so passengers are advised to contact the airline ahead of time before being faced with hard choices on check-in.

American Airlines: American applies tight restrictions on the types of pets that can fly. Only dogs and cats are allowed onboard, but the cargo holds of most aircraft models do take pets. Fees range from $125 to $200.

Delta Air Lines: Delta does not allow elder animals on its aircraft but it does allow dogs, cats, and household birds (birds on domestic flights only). Animals are not allowed to fly in the cargo holds of several aircraft types in the fleet, and the airline does not transport animals, whether onboard or in the hold, to a number of countries, so it is best to call the airline first. Delta also instituted new rules for emotional support animals: advance documentation is required and must state the need for the animal from a medical professional. The fee range is $125 to $200 for international flights, except for Brazil where the fee is only $75.

Frontier Airlines: This airline offers surprisingly lenient pet travel policies:  dogs, cats, rabbits, guinea pigs, hamsters, or small household birds can fly in the cabin on all domestic flights (only dogs and cats on international flights). The fee is $75.

JetBlue Airways: This airline only allows small dogs and cats in the cabin of its aircraft and does not allow pets to be flown as checked baggage. Pets are subject to Petiquette, an etiquette pets and owners are expected to follow (behaviors are listed on the website). But good behavior is rewarded: owners get points for their pets, earning some 300 extra TrueBlue points. The fee is $100 and is counted in the carry-on bag allowance. If it has to be JetBlue, it is recommended that passengers buy the airline’s own branded and approved pet carriers and also consult the airline’s online checklist for flying with pets.

Spirit Airlines: The airline allows domesticated dogs, cats and household birds to most destinations (excluding any international gateways). Pets fly in the cabin of the plane only, not in the cargo hold. The fee is $110.

Southwest Airlines: Southwest loves pets and offers moderate pet policies. Pets onboard must be small in size and up to date on vaccinations. Pets fly in the cabins only, not in the cargo hold, and are also restricted to domestic flights. Passengers should to call Southwest to confirm and may want to reconsider taking pets on flights that stop or hub in Phoenix where temperatures can soar and planes can get stuck on the tarmac. Southwest sells their own approved and branded pet carriers for $58 at any Southwest ticket counter. The fee for a flying pet is $95.

United Airlines: Currently, despite recent dramas, United maintains a moderate pet travel policy. Cats, dogs, rabbits and household birds (excluding cockatoos) can fly the friendly skies and are allowed to travel in most aircraft cabins. But it is best to check with the airline in light of changing policies and vague guidelines offered online. Fee is $125. 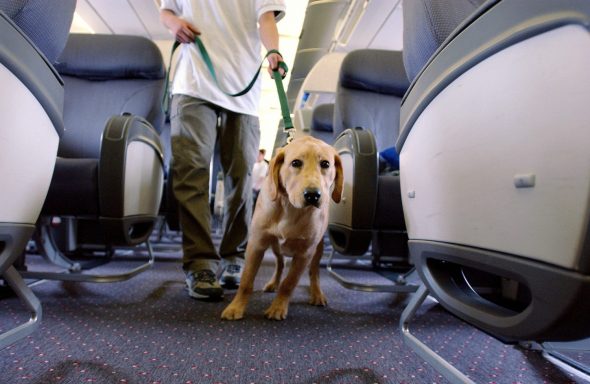 The Private Airline Alternative for Pets

Many owners with animals too large for that under-the-seat spot can consider the private airline route.

There are plenty of private jet sharing companies only too happy to tout themselves as the safer, more comfortable and convenient alternative – for a price. Victor, a private jet charter service, offers “Furs Class” service.

No restrictions here. Passengers can travel with their pets on their laps, feeding them treats and playing with toys during the flight.

The airline is not a membership or subscription service and there is no extra fee for traveling with pets. However, a flight from San Francisco to Los Angeles would cost $2,798.50 roundtrip for a seat on a six-seater Learjet 60.

Humane Advice for Traveling with Pets

If you must transport an animal by air and the pet cannot be accommodated in the cabin, the Humane Society recommends these tips if your pet must fly in the cargo hold

Pets on a Train

Traveling by train? Amtrak now welcomes dogs and cats that weigh up to 20 pounds for trips of up to seven hours on most routes. The additional fee is $25.

Gotta cruise? Not such good news. With the exception of proven assistance dogs and some waivers for private cabins, pets are not likely to be jogging with their owners around the outside lounge areas or playing shuffle board on the recreation deck. Animals may be able to board for select ocean crossings. Otherwise, if animals are onboard they will be confined to the kennels – hopefully a compartment protected from the elements and accessible to owners.

This article was first published by Multibriefs

Snakes on a Plane? Maybe…