What happens when the destination is the destination? We are all familiar with Las Vegas, a feint of lights, water, action and wealth surrounded by an immense desert of scrub and sand. Take away the gambling, however, and you get Dubai. The manufactured bauble of a city rising fast from the Arabian sands sees nothing but growth and innovation on the horizon, but the glimmers from this mesmerizing specter are hardly a mirage.

By 2020, this tiny emirate on the Arabian Gulf plans to operate not only the largest international airport in the world, but also the world’s largest forward designed city, a metropolis infused with fleets of self-driving, sustainably run vehicles; an entire “land” devoted to imagining daily life on Mars, a tag as the world’s center of medical tourism; and a continued lead as the epicenter of luxury hospitality. There isn’t much you can’t “do” in Dubai, easily the playground of the Middle East despite its Islamic roots and arid surroundings. 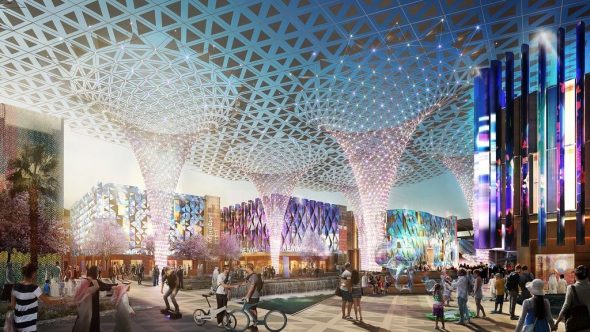 What happens in Dubai does not stay in Dubai. Rather, with its barrels full of petrodollars turned into tourism currency, Dubai’s mission for the past two decades has been to show what is possible at the intersection of intelligent design, seemingly limitless corporate investment dollars, and a future-facing ruler at the helm keeping it all in check. Striving for all the “ests” of the world takes effort and discipline, although restraint has yet to make its way into the destination’s development lexicon.

Take these facts for starters:

The ruler of Dubai, Sheikh Mohammed bin Rashid Al Maktoum, believes the emirate is not just a good place to shop and do business, it’s a smart place to see the future. In September, officials appointed what may be the world’s first minister of artificial intelligence, building on a national strategy to lead the Fourth Industrial Revolution. His overstated purpose these days is to “astonish the world.” And so far, he is on track to do just that.

Dubai: City of the Future

Elon Musk’s Hyperloop One is much on the agenda and with the money to make it happen, Dubai hopes to become a test destination for the tube-like prototype that could cut travel time between Abu Dhabi and Dubai (currently around two hours by car) down to 12 minutes. Another plan in motion is the city-state’s intention to introduce the world’s first taxi drones. Dubai is working with German firm Volocopter toward a vision that will allow people to hail a flying cab from convenient “Voloports” within the next five years. 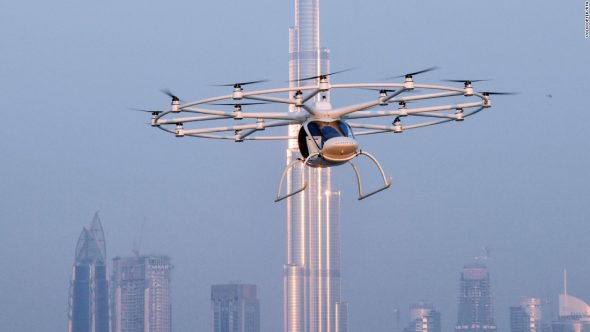 Robots, rather than people, will play an increasing role UAE’s future, especially as first responders and security dispatches. Dubai intends to equip the police force with traffic-dissing hoverbikes and recently demoed a robotic policing prototype that could issue fines, monitor problems through onsite video feeds and ID criminals through facial recognition. Similar solutions are in process for challenges faced by conventional fire departments in developing equipment that can tackle tough blazes in tall buildings.

Dubai is building its own brain trust for these tasks, spending the needed budget for education and social development. In October 2017, the country announced a “One Million Arab Coders” project to bring computer programming skills to young people across the Middle East.

Pulling it all back to earth, we learn Dubai welcomed 14.9 overnight visitors in 2016, cementing its place as the fourth most visited city in the world – a number that is expected to reach 25 million by 2020, according to Dubai Tourism & Commerce Marketing. We also saw the emirate top 100,000 hotel rooms with an eye to offer an inventory of 160,000 rooms by 2020 and its much-heralded Expo 2020 opening. Dubai is set to become the crane capital of the world, at various times harboring a quarter of the world supply. That is not expected to abate as the 2.5- by 11-mile site of Expo 2020 gets underway in South Dubai.

The impressive Expo site will be shaded by an intricate domed trellis evoking an ancient golden ring discovered at Saroug Al Hadeed archeological site. And once the fêtes are finished, the buildings and infrastructure will become the next “it” lnsighborhood for hotels, shopping, dining and business in Dubai. The location will be another stop on the Metro, which is fast expanding from its already substantial network of 72 trains along 50 miles of tracks.

Making sense of all this is not for sissies, however, breaking from the hype and excitement of this “can do” city, the visitor is left with plenty to explore.

Leisure visitors will want to stay along the gulf-facing resort strip of Jumeirah Beach. Dozens of resorts here – from the seven-star Burj al Arab to such three- and four-star family brands as Holiday Inn Express, Ramada, Rotana, Doubletree and Radisson Blu – spread out with all the beach, pool, spa, shopping and even themepark action one could crave. Everything is new here – Dubai only got started as a tourism destination in the 1990s. 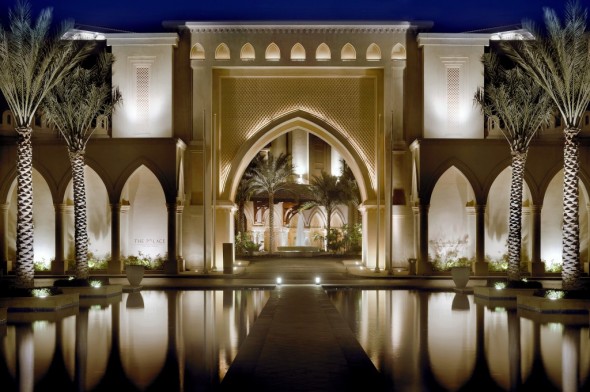 If there is an “old” city it is found along Dubai Creek in the area of the city called Deira. But what is old here is also new. The Gold Souk and Spice Souk were rebuilt to replicate what they once were or might have been had there ever been much of a there there in this stretch of the desert along the Arabian Gulf.

Rather, Dubai was a quiet pearl diving village until the discovery of oil in these sands. But the oil boom was bound to bust and the ruling Maktoum family found new gold in tourism long before the reserves ran out. Dubai became and still is a tax-free port for shipping and reassembly and from there, spokes of tourism, business, publishing, media, gold, luxury goods, hospitality and real estate began turning the wheel of growth into what has become a model city for the industry of reinvention.

So, a visitor can still walk the streets of Deira, especially in a neighborhood called Bastakiya, and get a sense of the real Dubai – whether in the glittering jewelry markets, aromatic spice shops or the refurbished houses that have only recently become art galleries, gift shops, tea houses and quaint B&Bs. The truly curious can head to the Sheikh Mohammed Centre for Cultural Understanding and spend an afternoon talking to a local (likely wealthier than a Hilton heir) about the ways of the desert, the ways of the Beni Yas tribe and the ways of the desert falcon – a local lunch included.

Hotels on the city side come with the added advantages of walkability (everything in this area is somehow a shopping and dining mall) and easy access to the Metro, where rides run around $3, but considerably less with day and multi-day passes. 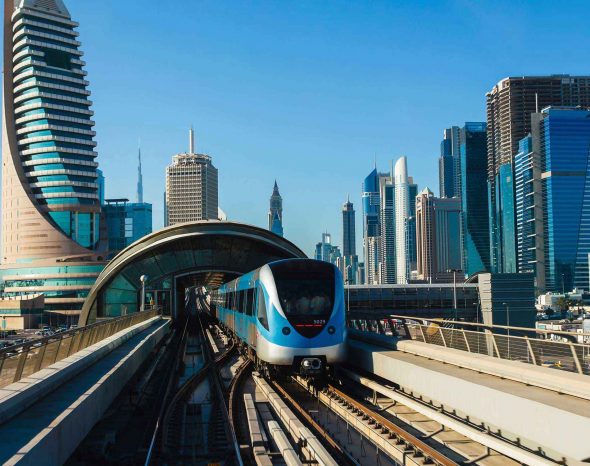 It is not hard to find all the North American hospitality brands in Dubai – Hyatt, Sheraton, Marriott, Hilton, Fairmont, Four Seasons, Four Points, W, Westin, and onward. However, Dubai-based brands, such as Emirates and Jumeirah, should be considered for those who want added touches of luxury and ambience. City stays can be counted on to be around 25 percent cheaper than beach stays and certainly seasonal discounts (peak summer temperatures average 105 degrees vs. 75 degrees in January) should be considered. A new VAT tax launched in January, adding about 5 percent to the bill for all non-essential goods and services.

The Buy of Dubai

Dubai, at present, counts no fewer than 72 malls, including the Dubai Mall (1,200 shops and largest mall in the world in area), that sits at the base of Burj Khalifa, currently, at 2,761.5 feet, the tallest building in the world. The city is by all accounts a shopper’s paradise with malls that cater to the imagination, such as the Ibn Battuta Mall that evokes Andalusia, Tunisia, Egypt, Persia, India, China in its designs. Malls here come with attractions – a Vegas-style fountain show, a ski slope and ice bar, an ice skating rink, even a full-sized aquarium. Deals can be had from designer duds to designer knock-offs — any hotel concierge can tell you where to look.

The Do in Dubai

Beyond the mall, top attractions in Dubai can be found in views, in shows and at the race track. The most notable view spots in Dubai include the Skyview Bar at Burj al Arab (one of the only ways you can get into the hotel if you are not a guest, but a cocktail will cost you); Other top draws: At.Mosphere on the 122nd  floor of Burj Khalifa, Prime68 at JW Marriott Marquis; Tomo at Raffles Dubai and Mint Leaf Dubai at the Emirates Financial Towers.

The city is famous for its thoroughbred horseracing titles, stemming from the Dubai World Cup held at the Meydan Racecourse. The site holds regular challenges and contains a horse racing museum, gallery, five-star hotel and nine-hole golf course as well as a business and conference center. Polo enthusiasts can head to the Al Habtoor Polo Resort & Club in South Dubai, anchored by the St. Regis. This is a great spot for meetings, especially bonding sessions for those who want to try their hand at the game riding the hump of a camel.

As for entertainment, Dubai now has an Opera House in downtown Dubai bringing in talent and concerts in a variety of genres, from Giacomo Puccini to Jersey Boys. A Cirque du Soleil-style production by former show director Franco Dragone, called La Perle, has an ongoing engagement at Al Habtoor City, the location of recently opened Westin Hotel, W and St. Regis Dubai.

Finally, as the Dubai carrier Emirates expands in fleet and marketshare, those flying business class should remember the airline offers four complimentary transfers per trip – getting to the airport of departure, from Dubai International Airport to hotel or residence, and back again to airport and then home origin. Town cars from the airport in Dubai can be ordered up on the spot at arrivals (similarly, you can order a hotel-to-airport transfer online). Other transfers must be confirmed many days in advance. Visas are offered on arrival for U.S. and Canadian nationals. Phone chips with data can be purchased at the airport for around $25.

“Travel professionals can use a hand with Dubai. There is a lot to know,” says Renata Graham, CEO of Graham International. The former U.S. marketing representative for the Dubai Tourism & Commerce Marketing (DTCM), Graham now assists Desert Adventures in interfacing with travel professionals in North America. “Desert Adventures is a leading DMC in Dubai and can deliver up what the UAE has in store. These can go from well-appointed hotel accommodations, to intriguing and engaging sightseeing tours showing the culture, attractions, desert activities, bargain shopping, and fine dining experiences. All these have made Dubai among the hottest places to be in the world for both MICE and leisure tourist.”