Sometimes luxury isn’t delineated by the thread count in a hotel’s bed sheets or the number of bellmen in the lobby. Sometimes luxury means an exclusivity so profound that even your friends have to get out a map to figure out where you’ve been.

One of those hidden destinations is the island of Kosrae, part of the Federated States of Micronesia. A volcanic nation surrounded by warm turquoise water, it’s about half-way between Hawaii and Guam in the remote reaches of the Pacific Ocean a few hundred miles north of the equator. There aren’t more than 8,000 people on Kosrae, which is only 42 square miles. While I was there, I drove on every inch of paved road on the island: about 14 miles all told. 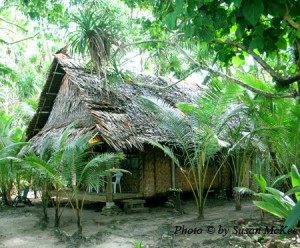 While the island is lush, overgrown and green with steep, forest-covered mountains, the main draw is offshore. Three sets of expatriate entrepreneurs are developing resorts to position Kosrae as a scuba nirvana, the ineffably ultimate destination for divers. The island is surrounded by pristine coral reefs, said to be thousands of years old. They’re home to exceedingly colorful fish and other tropical wildlife. Not that I would know, as I’m not a diver. I was drawn by the prospect of snorkeling, but that proved to be a snare and delusion — more on that later.

The Kosraean resorts aren’t elegant in the usual sense. Two — Kosrae Nautilus Resort and Pacific Treelodge Resort — resemble nothing more than 1960s roadside motels — plain concrete box rooms with window air conditioners. The third — where I stayed — attempts a bit more native atmosphere. All are run by outsiders who were lured to Kosrae by the laid-back atmosphere and superb scuba diving.

Kosrae Village Ecolodge & Dive Resort (has 10 Pacific island-style thatched-roof cottages set in the jungle, just steps from the beach. Mine had a front porch with a rocker leading into a large room with a table, chairs, small refrigerator (stocked with cold bottled water and fresh fruit) and a comfy bed. The bathroom included an open shower– no need to worry about cold weather on Kosrae; it’s hot and tropical year ’round. Netting and mosquito coils kept the critters at bay. At night, all I could hear was the gentle lapping of the waves on the sandy shore. There was a hermit crab living in a shell just off my porch: we’d greet each other warily each time I passed.

Meals in the resort restaurant highlight local cuisine, and there was always an absolutely silent cat or two at my feet begging quite politely for a lagniappe. The Wi-Fi worked best in the restaurant, but there was electricity and running water in my cottage. Although Bruce was off island when I was there, Katrina couldn’t have been more accommodating (the pair with no last names came from California in the mid-1990s to set up the resort). Katrina even drove me to the airport when my scheduled transportation was a no-show.

Kosrae seems hobbled by its history. Except for the dive resorts trio, there’s very little commerce. Gasoline is dispensed by hand — vendors carry it out to your car in gallon jugs and funnel it into the tank. The only factory on the island mills flour from the taro root. 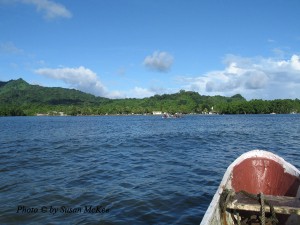 All activity comes to a screeching halt on Sundays: most everything except going to church is forbidden on the Sabbath. There are no restaurants outside the resorts, just a handful of what could charitably be called tourist attractions, and nary a souvenir shop or snack stand. When I was on Kosrae, there was not one ATM on the island. Oh — and nobody took credit cards.

Kosrae, the easternmost of the Caroline Islands, had a culture centered on fishing and subsistence agriculture when Christian missionaries arrived from Hawaii in the mid-19th century. A Cleveland, Ohio-born pirate by the name of Bully Hayes ran the place in the 1870s, and the Germans annexed it to their empire in 1899. Japan ruled Kosrae from 1914 to 1945, when it became part of the Trust Territory of the Pacific Islands, an administrative area of the United States. That’s why, today, the currency is the U.S. dollar and the postal service is operated by the U.S. — it costs the same 33¢ to mail a post card home from Kosrae as it does from Cleveland.

The missionaries, dour Congregationalists, had a profound and lasting effect on the island, which (except for the restaurant and hotel operations of the resorts) shuts down on Sunday. No swimming in the Pacific. No diving. No boating. Even paddling about on inland waterways is frowned upon by the locals, who spend much of the day in church. Dress is modest and somewhat old fashioned (women never wear pants on Kosrae, and I never saw a local in a bathing suit).

Because of their unlikely New England roots, sanctuaries are plain white buildings with spare steeples. All the women sit on the left side, and all the men on the right. Evidently the missionaries did not allow musical instruments, as the hymns were sung a cappella. The Sunday I was there, there was lots of singing in the Congregational church I attended in Utwe. The congregation is divided in thirds by residency, and the choruses for each were performing. After the service, each of the three sang in turn — all the women in each group wore ensembles made from identical fabric.

Now, about that snorkeling. I visited Kosrae as a guest of its tourist office. Before I left the States, I carefully explained to the public relations representative that I did not know how to scuba. No problem, she said, as the snorkeling there was magnificent. She never mentioned the impossibility of getting cash or using credit cards on the island, probably because, as she told me later, she’d never actually been there.

On my second afternoon there, looking forward to unique tropical underwater vistas, I grabbed my snorkeling gear and set out on a charter boat, headed for a secluded cove. The water was bathtub warm and the sun sparkling. But beneath the surface, all I saw was sand. Not one fish. Not one plant. Not one piece of coral. I had crystal clear view of absolutely nothing but the smooth white sand bottom of a lagoon.

United Airlines is the most direct carrier to Kosrae and other islands in Micronesia. Most airlines and combinations reach the island from Los Angeles in 3 or 4 stops and in journeys that take 19 to 30 hours.