Amy Hurley of Boston cruised in Alaska in 2017 with three generations of her family. Outside of Ketchikan, she had a jaw-dropping moment – the kind you dream about in anticipation of a cruise to a bucket list destination.

“We saw four whales spiraling down to create a whirlpool to get food and jump up with their mouths open,” said Hurley, 50, a hospital fundraiser. “It’s rare, and we saw them do it four times. That was pretty amazing. Cruising is a great way to see Alaska.”

The high demand for Alaska cruises has a lot to do with the state’s amazing scenery – from snow-capped mountains and immense glaciers to emerald rainforests. Travelers return with stories of extraordinary experiences with wildlife and with guides who enthrall visitors with tales of native culture, frontier spirit and a rich, colorful history that includes the Gold Rush. Next year, Alaska will celebrate its 60th anniversary of statehood.

Princess Cruises, the line that Amy Hurley cruised on with her husband, young children, mother and mother-in-law, is operating seven ships in Alaska in 2018. Next year, when Princess celebrates its 50thanniversary of bringing passengers to Alaska, it will add one of its largest and newest ships, the 3,500-passenger Royal Princess, to the region.

Holland America Line, also with seven ships deployed in Alaska, last year celebrated its 70th season in the region. Carnival Cruise Line, the leader in the contemporary cruise market, and ultra-luxury line Seabourn also cruise through the state during its top travel season, from May into September. Next year, Cunard will return to Alaska with cruises in May and June.

Both Princess Cruises and Holland America Line have extensive land operations including rail cars and lodges, making easy planning for those looking to explore inland to popular places such as Denali National Park, Fairbanks and beyond, on a variety of pre- and post-cruise tours.

Cruise ships typically begin Alaska cruises in Seattle, Vancouver and ports near Anchorage, though there are also longer sailings from ports such as Los Angeles and San Francisco. On any itinerary, passengers have the extraordinary experience of cruising past blue icebergs to see glaciers thunderously calve into the sea in Glacier Bay National Park and other equally impressive settings.

At ports of call such as Juneau and Skagway, bald eagles fly overhead as you view totem poles and learn Gold Rush history. Shore excursions take travelers into the wild by land, sea or air, including such experiences as flightseeing over a glacier, boarding a small boat to follow whales and joining active excursions, including hiking, biking, kayaking, canoeing, glacier trekking, and even snorkeling.

Attractions in Alaska go beyond serene beauty. It is a safe and amazing place, including for multigenerational families, Hurley found. 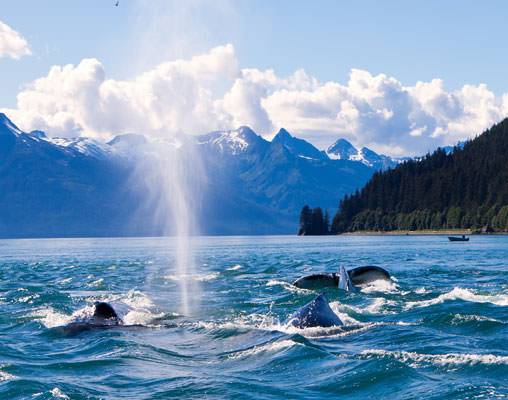 Her family enjoyed meeting a wolverine at a wildlife preserve in Haines. Driving back from that shore excursion, they also caught a surprise view of several bears lumbering on the side of the road.

While the grownups in her group were impressed when their ship brought them up close to a calving glacier, the kids had their own method of glacier-viewing. Says Hurley with a laugh: “They wouldn’t get out of the pool. I have pictures of them in bathing suits in front of the glacier.” 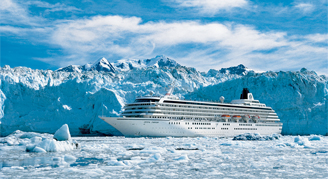 As part of Princess Cruises’ award-winning North to Alaska program, local personalities join guests on board to share their experiences – including lumberjacks, storytellers, naturalists and photographers.

Princess Cruises’ Cook My Catch provides opportunity for guests on select fishing excursions to have their very own catch of the day cooked for dinner. Foodies may want to take advantage of the brand’s new partnership with Bon Appétit, by booking the lifestyle brand’s recommended Juneau Foodie Walking Tour.

Guests who extend their vacation with a Princess Cruises tour will enjoy stays at one or more of the line’s five wilderness lodges, with access to or from the ship via the line’s exclusive Direct-To-The-Wilderness rail service. Debuting this year at the Mt. McKinley Princess Wilderness Lodge is a tree house built by Pete Nelson of Animal Planet’s “Treehouse Masters.”

On Holland America Line ships, Alaska is well-represented whether you hear about the history of the Huna people from a Tlingit interpreter, sip Alaskan Brewing Company beer or taste the flavors of the Pacific Northwest and Alaska in signature dishes created by Ethan Stowell, the star Seattle chef newly appointed to the line’s advising Culinary Council.

“Alaska in Concert” is a not-to-be-missed concert created for the cruise line by BBC Earth, with live music set against a backdrop of amazing, four-season footage from the series “Wild Alaska.”

Holland America Line’s award-winning Land + Sea Journeys, which range from 10 to 20 days, combine a 3- to 7-day cruise and a visit to Denali National Park, Anchorage and Fairbanks. Some also take guests into the remote Yukon Territory.

Guests stay at Holland America-owned Westmark hotels in Fairbanks, Anchorage and Denali. New is the opportunity to enjoy a meal with unforgettable views at the grand, two-story restaurant in Denali Square at the McKinley Chalet Resort. Expected to debut in summer 2019 is a 99-room addition that will feature the first-ever junior suites at the resort, which serves as a base camp for adventures at the national park.

New this year are a pair of expanded, 14-day Carnival Journeys cruises to Alaska, round-trip from Long Beach, Calif., on the Carnival Splendor, in August and September. These popular cruises offer activities focusing on a variety of topics – everything from photography and cooking to arts and crafts and celestial navigation.

When Cunard returns to Alaska in 2019, passengers on the Queen Elizabeth ocean liner will benefit from the line’s new partnership with Rocky Mountaineer, with pre- and post-cruise experiences available on the opulent, all-dome train fleet. The excursions combine views of untouched wilderness, historic storytelling and top-notch cuisine, including an Alaskan-themed afternoon tea.

On Seabourn ships in Alaska and British Columbia, guests enjoy both a luxury experience shipboard and an opportunity to explore remote areas, thanks to its Ventures by Seabourn optional excursions. Robin West, Seabourn’s director of expedition operations, spent two years researching itineraries with a focus on going beyond the tried-and-true ports and into wilderness areas, before the line returned to the region last year.

The 458-passenger Seabourn Sojourn, a ship equipped with such niceties as The Grill by Thomas Kellerand an expansive Spa at Seabourn, serves as a base camp for Zodiac, kayak and hiking tours, run by a 12-person expedition team that also provides insightful lectures shipboard.

“What we are trying to do is give our guests periods of times to immerse in the environment,” West says.

The Seabourn itineraries include an entire day, for instance, in Misty Fjord National Monument, a protected area about the size of Connecticut. Zodiacs take guests to awaiting floatplanes for aerial views of such sights as waterfalls, bears and bald eagles.

West’s favorite Alaska experiences include kayaking around the Inian Islands.

“You come from open ocean and all of a sudden into a channel and can see some of the glaciers, and in the sheltered water are 50, 60, 70 sea lions on rocks and in the water, slapping salmon with fish flying all over the place,” West says. “Alaska can offer that kind of rare, mind-blowing experience.”