Strength for hand-to-hand combat, accurate archers, and fast horses – all three were required for Genghis Khan’s warriors in the 13th Century and each is a component of Mongolia’s annual Naadam Festival today. For those visiting Mongolia the competitions are a huge draw and part of the reason I came this way.

Mongolian wrestling is for men only, but archery has expanded to include female competitors. Adolescent boys ride the horses for the races, because (our guide explained) the idea is to test the ability of the steed, not the rider. 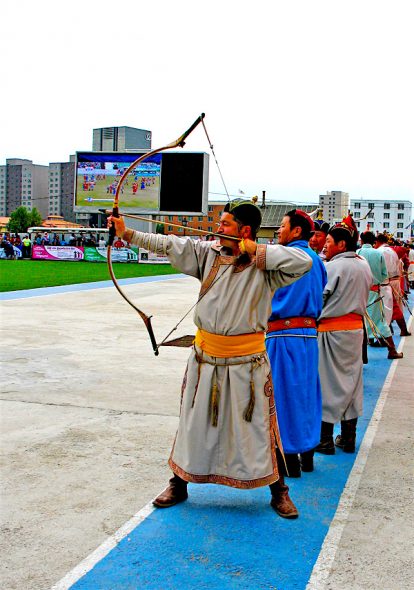 There are Naadam games held in mid-July throughout the entire region each year, with the largest taking place in Ulaanbaatar, the capital of the country of Mongolia. Note: Naadam’s three sets of competitions are held in either the independent country of Mongolia (sometimes referred to as Outer Mongolia) or the region of China northwest of Beijing, often referred to as Inner Mongolia.

Tour season is short in this area of the Central Asian steppes. At the time of this writing (late January), the daytime temps in Ulaanbaatar are -27° F. The city has an average annual temperature just below freezing, making it the coldest capital in the world. Mid-summer, when the temps are reliably in the 60s, that is probably the best time to visit.

I spent close to a month in Asia, visiting both Inner and Outer Mongolia.

My first stop was Ulaanbaatar (the name, conferred on an existing town by the Soviets in 1924, means “Red Hero”). In addition to the games (held each year from July 11 to 13), there was time to visit a couple of museums: one delineating natural history and the other showcasing Mongolian Art, as well as the Winter Palace of the Bogd Khan, built about 1900.

In Ulaanbaatar, the games are held each year from July 11 to 13. Both wrestling and archery take place in a stadium near downtown and the horse races out on the steppes. The races start far from the finish line – between 15 and 30 kilometers, the length determined by the horse’s age. The jockeys – mostly boys — range in age from 5 to 12.

Eight centuries ago the Mongols were a fierce whirlwind sweeping out of the east, bringing unimaginable death and destruction to central Asia, the Middle East, and Eastern Europe over the course of a century or so.

The Mongol hordes, led by Genghis Khan, were a military force like nothing seen before. Some 100,000 ferocious and bloodthirsty mounted soldiers used the medieval version of shock and awe to subdue cities and kingdoms, creating the largest contiguous land empire in history stretching at its peak from Hungary to China.

Dynastic squabbles eventually dismantled the empire, but its heartland – Mongolia, survives today – partly within the People’s Republic of China and partly as an independent country.
The country of Mongolia remains an intriguing mix of cultures: a bit Chinese (Genghis Khan’s grandson, Kublai Khan, established the Yuan dynasty in China), an overlay of Russian from the Soviet years and at its foundation, proud Mongols.

The Mongol language was forced to fit the Cyrillic alphabet during the Soviet era, but is reclaiming its elegant Mongol script, seen now in the signage in Ulaanbaatar.

Outside the capital, it’s hard to navigate without a native guide. Roads are mostly tracks in the wilderness, signage is indecipherable to the Westerner, gas stations are few and far between and distances are vast.

To avoid the hassles, I booked my trip through Travel All Mongolia. The tour group leader, who stayed with us for the 10-day journey, was an English teacher during the school year.

Using a combination of airplane flights and van transits we managed a comprehensive visit to this through exotic landscape. 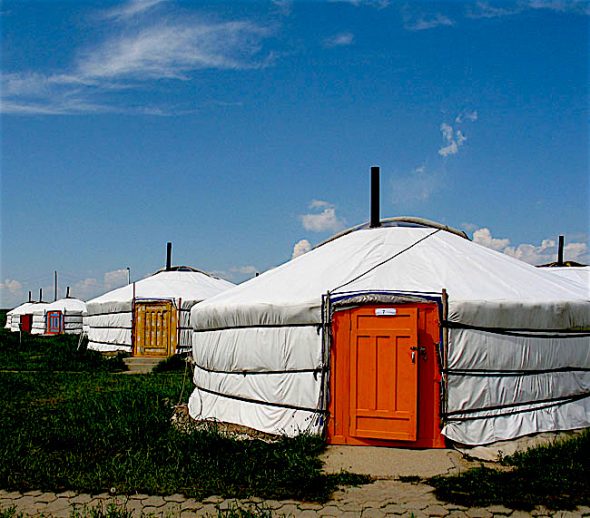 In the Gobi Desert, we stayed in gers (sometimes called yurts). Tourist camps are rows of these traditional round felted tents albeit with beds, two to a unit. Some had pot-bellied stoves, but the weather was warm enough that they weren’t needed.

In five of the six places we stayed, there were electric lights and outlets in the gers (a tourist does have to recharge camera batteries, after all). Bathhouses, much as you may remember them from summers at sleep-away camp, provide Western toilets, showers, and sinks.

Karakorum, located at a confluence of ancient trading routes in the Orkhon Valley, was the first Mongol capital; it’s where Genghis Khan held court. When Kublai Khan decamped to what is now Beijing, the buildings were taken apart and the stones used to erect Erdene Zuu Khiid, the first Buddhist monastery in Mongolia. The Soviet era ended that use (Stalinist purges in 1937 shut it down completely). Erdene Zuu’s religious purpose was restored with the collapse of Communism in 1990, and it’s worth paying the admission price to see inside the three temples.

It’s easy to spot the monastery from afar — the enormous wall (400 meters square) enclosing the complex is topped with 108 identical stupas. Outside the monastery are two enormous stone turtles, four of which originally marked the boundary corners of Karakorum.

At 1,564,116 square kilometers, Mongolia is the 18th largest and most sparsely populated sovereign country in the world with a population of three million.

Just across the border to the south is Inner Mongolia, an autonomous region of northern China that’s slightly smaller in area and with a population of 25 million.

The contrast is stark. In Mongolia, the wide open spaces pan to vast herds of thousands of sheep, goats or camels tended by nomadic herders who’ve followed the same way of life for generations. In Inner Mongolia, herders are restricted to a mere 200 animals , or make that 500 if a bribe to a local official is successful.

You will also find factories and mining operations pretty much everywhere in Inner Mongolia. Instead of blue skies, as is the view further north, a heavy layer of pollution coats the land, even in the countryside). Mining is probably the biggest threat to the region: copper, gold, uranium, silver and coal mines in Outer Mongolia, rare earths, natural gas, and coal in Inner Mongolia, which is China’s ­second-largest coal-producing region.

The tourist gers in this Mongolia might be considered more primitive in Inner Mongolia. They may or may not contain beds (we slept four to a ger on a rug placed atop a concrete floor) and they may or may not include plumbing (yes, our toilet was a hole in the floor of a three-sided adobe-brick stall).

For visitors seeking to fulfill a bucketlst pledge of seeing Mongolia as the vast, historic and untouched region most of it remains while managing as much luxury inside such a trip as can be had, a trip with Nomadic Expeditions and a compelling stay at Three Camel Lodge in The Gobi may be just the ticket.