Updating press and members of the travel trade at a meeting held in Los Angeles Thursday, tourism commissioner Beverly Nicholson Doty noted the cruise lines have returned, the rebuilding is underway and the islands of St Croix and St. Thomas are now back to 90 percent of their pre-storm booking numbers with full recovery expected in January. 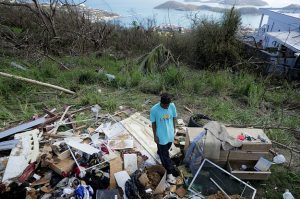 St. John, the northernmost of the island chain, was hit the hardest and the rebuilding is more comprehensive and will take more time.

Two cruise ships at the port in St. Thomas houses relief workers while the task of reconnecting power lines, rebuilding homes and hotels and clearing away debris still visible from the storms’ wrath continues, likely well into 2018. At least a third of the power on these islands was knocked out. Water, collected through an intricate system of cisterns, however, was never a problem for the residents of these islands.

“On Nov. 1, the Buccanneer on the island of St. Croix opened up once again to guests and then I knew we were back,” she said.

A week later Royal Caribbean began clearing the way for its Oasis line cruise vessels to return to the islands. Princess Cruise Lines is organizing some good will activities for passengers scheduled for port days in January. A battalion of volunteers – islanders, FEMA workers and voluntourism groups – are clearing and cleaning the beaches while The Army Corps of Engineers oversees the reinstatement of the power grid – mostly below ground this time in order to withstand what seems to be the new order of weather disaster events as the world’s oceans heat up.

Meanwhile, the hotels and resorts that support the tourism sector – easily a third of the USVI’s GDP – are getting significant makeovers, if not ground-up rebuilds.

“The good news is it will all be new product and it will be great,” Doty said.

For now, most visitors are coming in through the cruise lines. Other travelers are finding luck with booking accommodations through sites, such as Airbnb, and villas through sites such as VBRO. Yachting has picked up as well.

Doty notes that 90 percent of the power on St. Thomas and St. Croix will be managed by Christmas. Estimates for full restoration of power on these islands look more toward summer.

“Still, you go into many of the hotels on St. Thomas and St. Criox and all is as normal as if the hurricane never happened. There’s music, people are looking at their Wi-Fi. It’s very encouraging,” she said.

The islands pulled all advertising on September 15 and are not openly promoting at this time. The USVI tag line for the present changed from “USVI: Very Nice” to “USVI: Still Nice.”

Because of the limited inventory of hotel rooms and the rough and raw quality of the terrain nearly three months after the storms hit, the USVI is not advertising itself as a place to look for bargains. While inventory can be booked and tours are still running, things will remain a bit hobbled into late 2018, Doty said. But then, should the seas around them remain free of top category storms, the islands should be prime for their rediscovery.

To keep updated on conditions in the USVI go to USVIupdate.com.