If you have ever needed a reason to visit Columbus, Indiana, perhaps this one is it. Exhibit Columbus, on view through November 26, 2017, is the inaugural edition of what’s expected to be a biannual celebration of public art in an Indiana town already known internationally for its Modernist architecture.

Eighteen “site-responsive” installations placed downtown and beyond connect with and comment on the small Hoosier community’s design legacy.

Columbus is a city of only 45,000, yet The American Institute of Architects ranked it sixth in the nation for architectural innovation and design – right behind Chicago, New York, Boston, San Francisco, and Washington, D.C.

A tour map available at the Visitors Center lists over 75 buildings and pieces of public art by internationally-noted architects and artists. How did this happen?

One J. Irwin Miller, CEO of the Columbus-based Cummins Inc. from 1934 until his retirement in 1977, was trying to attract top talent to the town and, well, there had to be something special there to lure in engineers and other transportation experts from larger cities.

What about traffic-stopping architecture? The first building constructed under the Cummins architecture program was a public school for the town’s growing population. If the school system picked an architect from a list of five provided by the foundation, Miller said, then the Cummins Foundation would pay that architect’s fees. Done and done. Schmitt Elementary designed by Harry Weese opened in 1957 and Columbus never looked back.

Since then, some of the world’s finest architects have made the town into a living museum of modern architecture, with works by I.M. Pei, Richard Meier, Edward Larrabee Barnes, Robert Venturi, Eliel and Eero Saarinen, Harry Weese, and Deborah Berke. 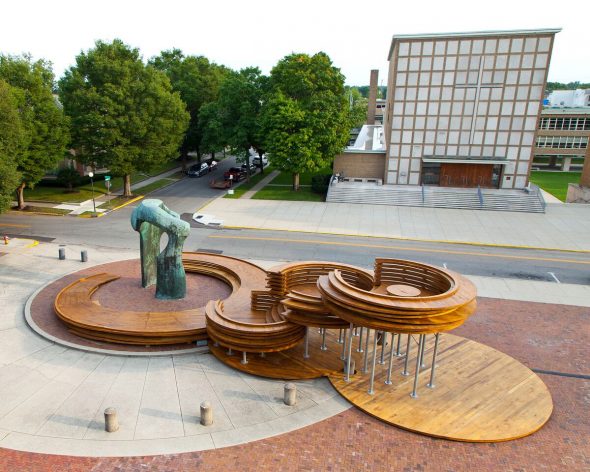 To build on that design legacy, Exhibit Columbus was launched in 2016 with five installations created from a widely acclaimed juried competition. Eventually, 13 more installations rounded out Exhibit Columbus with a crowd favorite in the Conversation Plinth in front of the Cleo Rogers Memorial Library, designed by IKD. It uses discs of Indiana hardwood to circle around an iconic Henry Moore sculpture titled “Large Arch”. There’s no doubt that this will be the most photographed of the Miller Prize winners along Fifth Street.

Other installations “in dialogue” with their locations for Exhibit Columbus include Playhouse, which fills an alleyway next to Kidscommons Children’s Museum; Between the Threads, which forms a labyrinth alongside the historic post office; and Theoretical Foyer, a “carpet” of colored bricks at the corner of Seventh and Washington streets.

The cornerstone of Columbus tourism is its architecture tour. Starting at the Visitors Center, 506 Fifth Street, Columbus that is across the street from Eliel Saarinen’s 1942 First Christian Church, a narrated bus tour drives by more than 40 significant structures and works of art, and provides the opportunity to see the interiors of two buildings.

Of course, visitors can pick up a map and drive on their own, but they would miss the information provided by the docents who know the background and “starchitect” story of each building.

A separate tour takes visitors to the Miller House and Garden, a far-flung outpost of the Indianapolis Museum of Art. J. Irwin Miller and his wife, Xenia, commissioned their home in 1953. It combines the architecture of Eero Saarinen, interior design by Alexander Girard, and landscaping by Dan Kiley.

The dining room includes a permanent round table encircled with Eero Saarinen tulip chairs and their iconic pedestal bases. Mrs. Miller had Alexander Girard design needlepoint cushions for the chairs — each one incorporating the initials of one of the seven family members (the Millers had five children). They were stitched by members of Mrs. Miller’s book club.

If the interior walls of the home seem a bit bare, that’s because the couple’s entire art collection was sold at auction when the Millers died, for a whopping $220 million.

And, then there’s ice cream. In the heart of the walkable streets of Columbus’ compact downtown is Zaharako’s. Visitors can take a break from all that Modernist design and dig into an old-fashioned ice cream sundae (complete with a cherry on top), a milkshake, ice cream soda, or a dish of plain vanilla ice cream in a parlor first opened in 1900 and still provides a turn-of-the-(last)-century ambience.

An indie film, “Columbus,“ shows off much of the town’s architectural genius. It premiered at the 2017 Sundance Film Festival and collected top honors at the Valletta Film Festival on Malta.