Travelers heading to Southern California can build a little offbeat style into their stay by hubbing in La Jolla, an easy 20 minutes north of Downtown San Diego. The city of about 50,000 has the sunshine and surf and exquisite seaside village appeal and has maintained its luster through a century of changes along the Southern California coastline.

La Jolla is as much a settled community of high end homes on the Pacific as it is a comely tourism destination with fresh seafood cafes, creative jewelry, craft and notion shops, art galleries, cool clothing stores for the latest in beach and bistro wear, day spas and more than the usual share of nail salons along eight meandering blocks by the coast. 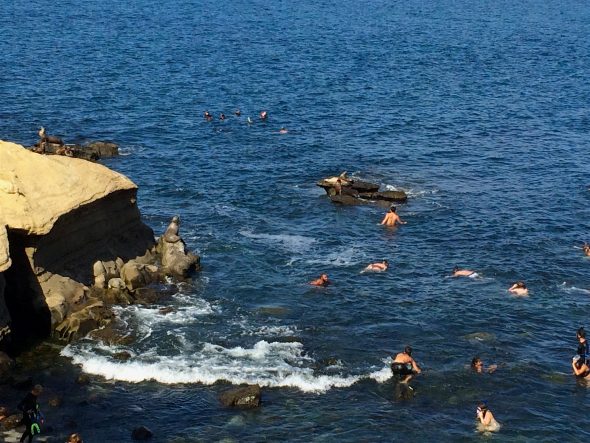 Swimming with Seals in La Jolla

Against this quaint setting find a most peculiar phenomenon below the cliff walk: sea lions and seals. Tons of them. The calm waters and protective coves are the Promised Land for these boisterous sea mammals that find their way in to mate, calve, swim, yelp and sleep on the warm outcroppings. At night, the beaches become a veritable barracks of pinnipeds sleeping side by side above the surf on the dry strands of sand beneath walking paths. Snoring, huffing and sighing sounds flow through the darkness between crashes of water on the shoreline.

The city washes the cove once a month and flushes the flotsam out to sea, making the water clean enough, for a time, for adventurous visitors that want to swim with the sea lions and seals and see what the fun is all about. 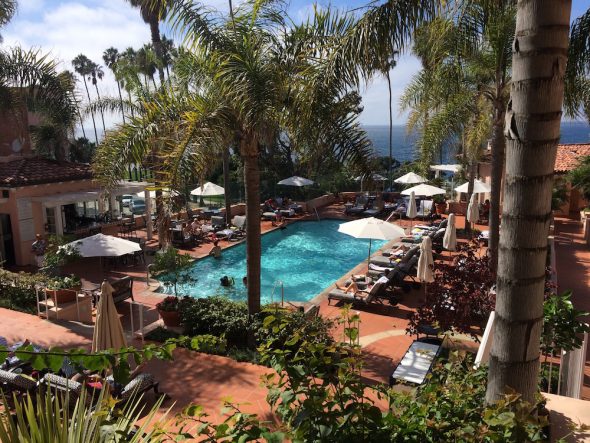 Presiding over this spectacle for a good 90 years so far is the 114-room La Valencia Hotel, a member of the Historic Hotels of America. The circa 1926 property retains a lot of its initial Spanish Colonial character in the lobby areas and courtyard. Flowering vines cover the pink cottages and bungalows that tier toward the ocean below, earning it the moniker, The Pink Lady.

La Valencia was a favorite glam spot for glitterati escapees during Hollywood’s Golden Age. It was a popular rest stop for weekenders moving from the Del Mar Race Track to the Tijuana casinos, especially before the town was able to catch up and snag some of the rising demand for quality restaurants and scenic cocktail spaces. Rumors about the hotel’s famous patrons include Gregory Peck, who loved to gather at La Valencia with friends, and even one Theodore Geisel, aka Dr. Seuss, who found inspiration through some of the odd-shaped (shall we say, “Lorax”) trees still to be found in La Jolla. Detective fiction writer Raymond Chandler used venues in the hotel as settings in his books. And the hotel still bears a tower that was employed as a lookout post during WWII when the U.S. feared coastal attacks by the Japanese. 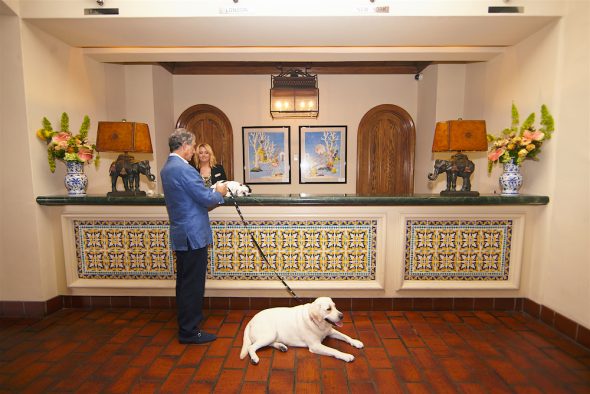 Today, the pet-friendly property continues to get the glam seekers and offers much they will not find elsewhere in La Jolla or San Diego. Historic charm is rare, indeed, in California hospitality as it often comes with a price. It is easier to tear town walls than to bolster them for preservation. La Valencia is just such a gift. Guests turn back the clock here to a simpler time. The palm-lined pool overlooking the ocean is the hotel’s centerpiece, offering Spanish fountains, decorative antique Spanish tiling and an inviting saltwater hot tub.

Overlooking the pool with amazing sunset views is The MED where guests can sip cocktails and enjoy creative takes on seafood and pasta on the terrace. The restaurant is the right place for popping the question, celebrating an anniversary, impressing colleagues and hoping to snag a second date. Southern California nights do not get more romantic, often complemented by evening window shopping around the town or a quiet walk by the ocean on the convenient cliff top path. 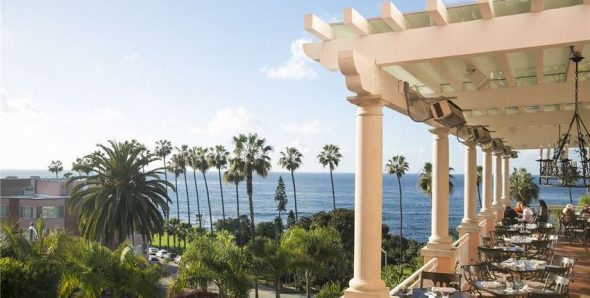 Guests can order up room service at all hours, order an in-room spa service, and enjoy cocktails and tapas in the courtyard with live music – often a talented vocalist playing Spanish guitar.

A Day at the Beach in San Diego

When it comes to how to spend the daytime hours, the earth is truly spinning too fast. First, there are the beaches – San Diego has some 70 miles of coastline. In La Jolla, a mile-long littoral along gentle waters make this beach a popular one for learning scuba or just swimming (with the occasional sea lion, no doubt). Nearby, two-mile-long Mission Beach is one of the most popular in San Diego, with a boardwalk full of skateboarders and bicyclists, volleyball players, and beachfront roller coaster enthusiasts.

Solana Beach in San Diego’s North Country is particularly popular with surfers, who favor the breakers at Fletcher Cove. Solana Beach is a somewhat secluded spot and has plenty of hidden coves, easily accessible by stairways from the street. There, also find Cedros Design District, a favorite place for antique and vintage shoppers.

Coronado Beach, across a Bay from San Diego by bridge, is a quieter scene of families and residents who come out from their mansions to enjoy the surf. You won’t find the crowds here, and the mica-infused sands of the 1.5-mile-long beach present a clean and sparkly sheen.

Beyond the beach in San Diego is the lure of Balboa Park. This is where culture and history meet the California sunshine. It’s a 1,400-acre city park established during the waning years of the 19th century and today packs with 17 museums, many world-class, and meandering groups of locals lawn bowling. Walking trails wind through the park’s flower-pocked gardens. A recommended stop is Botanical Building, an ornate century-old lath structure filled with more than 2,000 plants (free admission). Check out the art museum, natural history museum, the science center, the Japanese gardens, and, of course, the San Diego Zoo. The Balboa Park Explorer pass does it all. www.sandiego.org