There may be much to say about a 3.3 million-acre national park harboring destinations with names like “Badwater” and “Devil’s Golf Course”. But such natural oases of frontier life are rare these days and have much to offer to those adventurous enough to leave the safety of neon and traffic and travel to where roads end. Only two hours from Las Vegas along routes that run past popular bordellos, past down-on-your-luck gambling halls, two-horse diners selling great tacos, and a lonely, hand-crafted opera house that now stages performances for ghosts, is a world where imagination meets the sky.

Death Valley National Park brings on a world of unsung fascination but does not demand “roughing it” in the equation. Rather, luxury is an odd bedfellow in an area that boasts some of the harshest natural conditions in the world. But after a multi-million-dollar redo, name change, new owner and new branding initiative, the former Furnace Creek Inn is now the Inn at Death Valley with 66 redone rooms and upgrades throughout. The 91-year-old resort reopened February 1 as a member of the Xanterra group of hotels that are seen mostly in national parks and preservation areas as part of the Denver-based Anschutz Corporation.

The Inn at Death Valley

The property has a long history that has included celebrities and stardom, considering it opened in 1927. In the intervening years, it has served as honeymoon lair for Gable and Lombard and was a favorite vacation spot for Ronald Reagan. More than 90 movies and TV shows have been made in this area, including some of the original Star Wars films. Today, the lure is back with restaurants and fine dining all framing stunning backdrops. Enclosed meeting rooms open to a precious outdoor events area worthy of being its own spaghetti western–themed film set but with a rare green grass lawn for fully catered events and weddings. A small spa looks onto a magical pond and date palm garden. But the highlight of this resort is undoubtedly the pool. The sizable pool is filled with the healing warm mineral waters found in this area and keeps a seductive 85-degree temperature all year long. Some 22 new casitas have been constructed near the pool and look out onto the gardens and date palms. Comfortable lounge set-ups surround the pool and, unlike the past when the hotel would close in the Spring and reopen in the Fall, the reborn resort is open all year long. 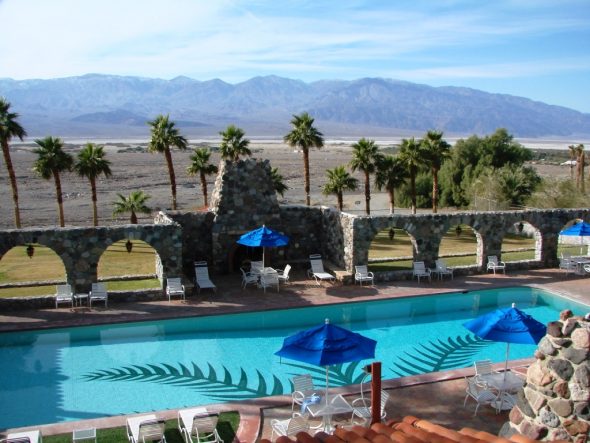 The Inn at Death Valley is part of a much bigger picture at this often-empty roadside stop along California Highway 190. The Oasis footprint includes the Ranch at Death Valley and the Furnace Creek Golf Course that all combine to make this junction its own destination. The ranch is a lot less fancy with 224 bungalow rooms opening onto a shady green park area with its own mineral water pool, fire pits for convos and marshmallows, canteens and cafes for meals and a fully-stocked stable of horses. Bigger plans are underway for a plaza area for shopping, dining and entertainment without infringing too much on the destination’s ecological footprint or position with the U.S. Dark Sky Association. Lack of ambient light and its preponderance of clear nights means Death Valley has the largest patch of dark sky in the U.S. With as little light pollution as the Oasis makes, it’s possible to see into other galaxies on almost any night of the year.

Other amenities to consider here: golf. The Furnace Creek Golf Course at Death Valley means playing an 18-hole round on the lowest golf course in the world. There is grass here, well maintained and complemented by willow ponds and birding decks. The prized 19th hole brings a golf cart drive-through for ordering grub and getting on with the game or enjoying the sun and scenery from the dining tables.

The golf course at the resort is not to be confused with the Devil’s Golf Course, one of the many mind-blowing natural attractions to be found in Death Valley.

There, just south of the Furnace Creek junction, is an extensive salt pan that was once Lake Manly and where it is said the devil plays golf amid the crusty salt formations and rocks. Further south and toward the western edge of the valley find the Racetrack Playa. This is where devilish tricks really start to play out amid some of America’s most astounding scenery. 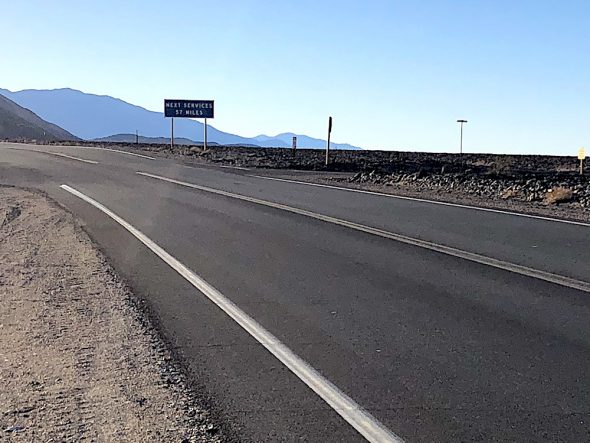 For decades people have been mystified by the clear and apparent independent movement of boulders, some weighing more than 100 pounds. They slither and slide without any outside aid over hundreds of feet along the flat surface of Racetrack Playa in Death Valley, leaving long, straight tracks in the ground as they move. The specter is as haunting from above as anything that could be viewed in Peru – widely known for the Nazca Lines often attributed to visits by aliens eons ago. These lines are often fresh tracks and the moving boulders have been witnessed and documented by scientists. The upshot however, is not ghostly phenoms. Rather, a combination of steady light winds and morning sun cause floating ice to break-up around midday. This activity is accompanied by widespread popping sounds from fragmenting ice panels as ice breaks into huge floating panels that separate as water forms. Floating ice sheets, driven by wind and flowing water, push rocks resting on the playa surface. Reports have accounted for the movement of as many as 60 large rocks in a single event.

A minimum must-do for anyone staying at the Oasis is sunrise at Zabriskie Point. An overlook about three miles from the Inn brings views of the colorful hues of Furnace Creek Lake, which dried up 5 million years ago and became a top source for borax mining. It’s one of the park’s most photographed spots, especially at sunset. In temperate weather it is possible to take the Golden Canyon from Badwater Road, a moderate out-and-back of about two miles, which can be extended into 5.5-mile loop.

Plenty of other hikes and attractions await that bring dunes, cliffs, an amazing palette of colors and shapes that cut against an endless cerulean sky. These include Artist’s Drive, Dante’s View (more than 5,000 feet above the valley), Panamint Springs, Stovepipe Wells, and Ubehebe Crater. There are museums that preserve the life of miners, especially that Borax Works that defined the area for much of the 20th century. And there are ranger stations open from November to April at Stovepipe Wells, where tours can be booked and hiking information obtained.

But be warned, Death Valley is a big place – more than 5,000 square miles. It’s easy to get lost, and easy to run out of gas and water where such services are few and far between.

Death Valley was given its disconcerting name by a group of pioneers lost here in the winter of 1849-1850 as they tried to find a short cut from Salt Lake City to California and avoid the treacherous Sierra Nevada Mountains. Naturally, with supplies and water in short stock, the group believed the valley would be their grave and so named the land. However, they were rescued in time and as they climbed over the Panamint Mountains one of the men turned back for a final look, and said “goodbye, Death Valley.” This name, and the story stuck. Tales and annual fests about the ‘49ers live on.