Sant Francesc Hotel Singular, a luxury Hotel in Mallorca in the heart of Palma’s celebrated Old City, offers plenty of not-to-be-missed modern panache within the bones of the island’s past.

Any visit to Mallorca means spending time wandering the narrow, cobbled lanes of Palma and venturing into cathedrals, museums and galleries that highlight some eight centuries of art and culture. Sant Francesc Hotel Singular allows guests to sleep within this history, basking in the aura of the baroque Sant Francesc cathedral that gives the hotel its name.

Walking into the lobby of Sant Francesc Hotel Singular feels like walking into an etching by Maurits Cornelis Escher. The block and white marbled flooring contrasts the cornices and buttresses and vaulting ceiling spaces; narrow stair wells climb toward mysterious lairs on hidden tiers. Stunning and peaceful, it takes moments to adjust from with hum of Palma beyond and slow the pace enough to see the contemporary artwork along the walls and public spaces, and the all-around beauty of well-considered design.

Further in you will find a quiet atrium courtyard with olive trees, a fountain and comfortable chairs and tables for working, reading, sipping and sunning. Listen carefully and you will hear the sound of horse hooves on smooth stones that might have made it just a day in the life at the turn of the last century. A quick glance will show it is only a horse drawn hansom taking tourists around the important sites of Palma. There are many such sites within a five- to 15-minute relaxed walk of the Sant Francesc Hotel Singular.

Sant Francesc Hotel Singular: Its own Destination in Mallorca

Yet, Sant Francesc Hotel Singular is its own destination on this Spanish island in the Balearic archipelago. Once the home of a noble family on the island, the 1880 mansion had been left untouched for 135 years when the current owners, the Soldevila family, bought it. The new owners also own the circa 1918 Hotel Majestic in Barcelona and formed the Majestic Hotel Group, now with six properties, and opened Sant Francesc Hotel Singular in 2015. Focusing on small, rarefied luxury, the family brought in International Hospitality Projects (IHP) and MJC Arquitectura to oversee the building’s design, restoration and conversion into 32 guest rooms and 10 suites.

Today, each of the accommodations is designed to fit the building, the view, the sense of place, and the oft unusual dimensions with custom-crafted furniture, luxurious textiles and fabrics, and hand-picked antiques. Much care was taken to preserve the original frescoes and moldings and wood-beamed ceilings. 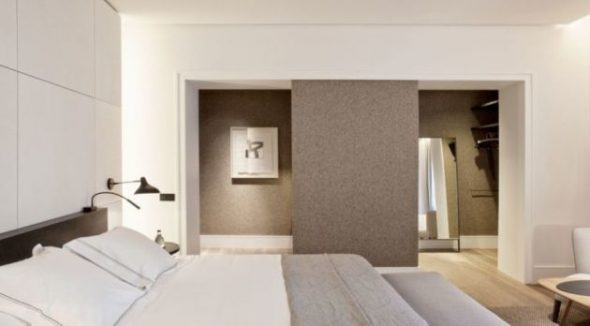 For instance, in the Sant Francesc Suite a hand-painted fresco with gold leaf trim adorns the ceiling and a romantic, wrought- iron Juliet balcony overlooks the ancient square and magnificent cathedral. Every accommodation comes with the contemporary touches of cable TV, WiFi, Nespresso coffee machines and thick, fluffy towels. Whether guests luxuriate in their ambient private quarters or wander the hotel, they will find comforting amenities that showcase the magic of their location.

That will include the sundeck and roof pool with views overlooking the medieval rooftops of Palma’s Old City flowing onto the old port and the Mediterranean Sea in one direction, and to the distant Tramuntana Mountains in the other. At dusk, the terrace transforms into a candlelit lounge serving sushi and libations by the glow of the flood lit Sant Francesc cathedral, just steps away. 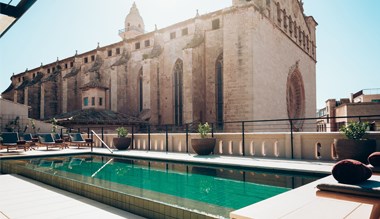 For dinner, Quadrat is sought out by visitors to Mallorca and locals alike. Find it in the former stables of the palais with cuisine inspired by culinary traditions of the Mediterranean blessed with creative, modern flair. That means fresh fruits of the sea with unusual saucing and Catalan sensibilities, washed down with treasured Mallorcan white wine.

For weary travelers, the Sant Francesc Hotel Singular highlights self-care and wellbeing with a spa suite for singles or couples. Pampering will employ the coveted skin care line by Anne Seminon, France’s champion of made-to-measure skincare concepts custom designed for each client. For the active set, a 24-hour fitness room is at the ready, but precious time in Mallorca might be better spent walking the historic city of Palma or exploring the magnificent landscapes and landmarks on the island.

Peeling Away History in Palma on a Visit to Mallorca

No matter what the purpose of this visit, Palma calls. In feel, this walkable Catalan city rolls out like Barcelona “lite” – with its chic, artsy neighborhoods, crowded, but sensual beaches, its buzzing, shaded ramblas and even its own Gaudí imprint.

While in the summer months Palma swells to the brim with tourists, by mid-October, as tanning season sets, the city is once again amble-worthy and peaceful with pedestrian corridors along Saint Miquel, Juame II and Palau Reial streets lined with shops selling espadrilles, condiments, chic cotton clothing, blown glass, Mallorca pearls, strong coffee and mouthwatering pastries infused with pork fat.

Most visitors take these bustling passages down to Palma’s ancient port, stopping at the llotja, now a modernist art museum, to gaze at the intricate 14th-century vaulted ceilings. Nearby the lines form to enter the Cathedral of Mallorca, a 13th-century Levantine-Gothic opus with the largest rose windows in the world. Its nave is also one of the highest in Europe and it is here that famed Catalan architect, Antoni Gaudí, was invited to put his stamp – in railing, lanterns and cast-iron candelabras – that were strung over the main alter at the beginning of the last century. 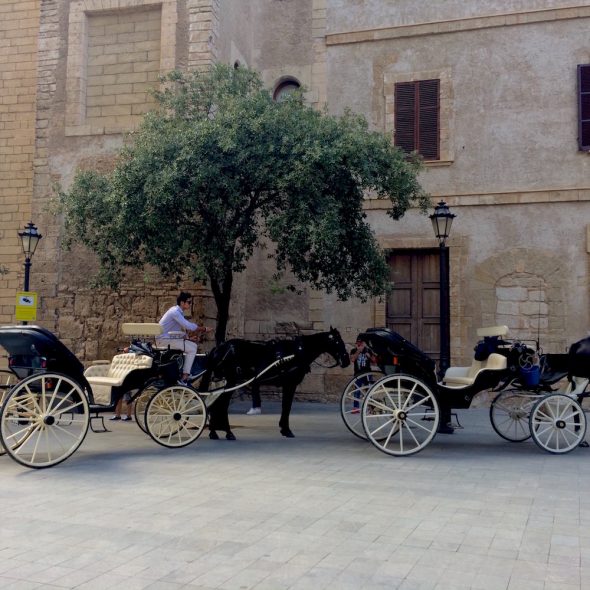 Visitors can take a horse and carriage from here to other high points: the Royal Palace, the Hotel Gran (now the Caixa Forum cultural center, but in the early 20th century, a paragon of Modernist vision – and luxury — with lifts and ensuite bathrooms), Cappuccino (an ornate Gothic coffee bistro), and the Church of the Santa Crue that houses the crypt of Sant Llorenc.

For those who may have seen the 2016 BBC series production of John Le Carré’s thriller, “The Night Manager,” on AMC, Palma is rife with recognizable film sets from the series, although they may have been stand-ins for other places. The façade of the Palau March, near the Cathedral de Mallorca, shows up as the entrance to a hotel in Istanbul. The terrace of the Sadrassana Restaurant in Plaça de Drassanes, the Santa Eulalia Church, and the adjacent Café Moderno served as meeting points in Madrid during the series.

A fun segue north, to the town of Soller, brings access to more sets and backdrops from the series and a wonderful immersion into the quaint rural life on Mallorca to be found amid villages and farms sheltered by the Tramuntanas. A delightful way to enjoy the breathtaking landscape between Palma de Mallorca and the Insta-worthy harbor town of Soller is to take the vintage, narrow gage tourist train, Ferrocarril de Soller. The trip takes about 90 minutes and costs around $30 each way. The town of Soller brings chic shopping along age-old pedestrian corridors. There are also noteworthy art museums and agricultural tours to consider between eating adventures and sleepy explorations.

Friendly, multi-lingual staff at Sant Francesc Hotel Singular can provide guests with myriad ways to experience the island, whether biking the beach strands near Palma, taking a sailing tour around the shores, winetasting, helicoptering over the island, or even taking a swing at golf in Mallorca.

A stay at Sant Francesc Hotel Singular in Palma will range between $230 and $517, depending on the season.