Easing through the Bosporus on a holiday in Turkey and eyeing the minarets that crown the jagged cliffs amid ruins of once thriving cities of Caesars and kings, you know you have arrived at the very root of Western civilization. The steel and glass high-rises fade into the din and almost cease to exist. All is quiet on this voyage and you imagine Odysseus losing his way and finding himself again in the succession of passing coves.

Turkey is not just a destination and Sea Song is not just a tour company. Turkey is history, living and preserved. It is the land where Mary lived out her years following her exit from Jerusalem. It is the land where Alexander the Great planned his moves, where Antony and Cleopatra honeymooned, where St. Paul preached, and where three sophisticated civilizations — Roman, Byzantine and Ottoman – thrived.

Today, Turkey is still at the crossroads, the stepping-stone between the Occident and Orient and offered up in sweet, bite size morsels by Sea Song’s customized tour options. Decisions about what to do in Turkey are best left to the experts who can maximize moments of leisure with the country’s bounty of historic treasures.

Established by Karen Fedorko in 2001, Sea Song takes care of all aspects of travel to Turkey, from airport greetings to a dawn lift over the cliffs of Cappadocia in a hot air balloon, to private cooking lessons in the home of a dolma doyenne. Sea Song can be found in the Kurtz-Ahlers collection of exclusive resorts, spas and travel experiences.

Ferdorko’s guests get hands-on guidance and special access they may not get elsewhere. This can be as coveted as a day with noted archaeologists and privileged access to off-limits excavation sites topped by museum tours with a local history professor.

Adventure travelers might try mountain biking along dramatic escarpments, kayaking along the Turquoise Coast, riding grade 5 rapids on the Coruh River, trekking the Lycian Way, or snowshoeing through Cappadocia in winter.

Itineraries cater to every interest and taste: archaeology, culture, art, religious heritage, adventure, cuisine and more – including laying back and letting a crew set the sails for a private cruise in a crafted three- to six-cabin Turkish gulet, from Bodrum to Gocek along the Mediterranean coast. 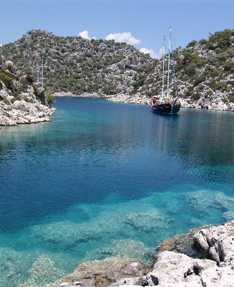 Cruisers on luxury liners ease into and out of their European itinerary with two- and three-night pre and post cruise packages that pour on the luxury. They will include stays at Kempinski or Four Seasons, including all transfers and tours handled by private, dedicated guides.

Sea Song is often the company of choice for writers who must accomplish an impossible list of research for their assignments in the region. And it is the tour company of choice when CEOs have to be handled with care. But a simple multi-generation reunion for a birthday or anniversary is also a Sea Song specialty, whether the group is two people or 102.

Owner Karen Ferdorko has been tabbed a Top Travel Specialist for Turkey by Condé Nast Magazine, a title not given lightly. But Turkey has earned its stripes as a destination that deserves a specialist. There is much more to dip into in a trip to Turkey than the delights of the Grand Bazaar.