While Bangkok offers all the film-quality intrigue of steamy, crowded streets, exotic foods and seductive shopping opportunities, it also offers a buffet of treats for tired bodies through a surfeit of spas.

These can range from impromptu storefront set-ups to eye-popping palaces of sensual splendor, but they will all be sure to offer one primary product: the Thai Massage. 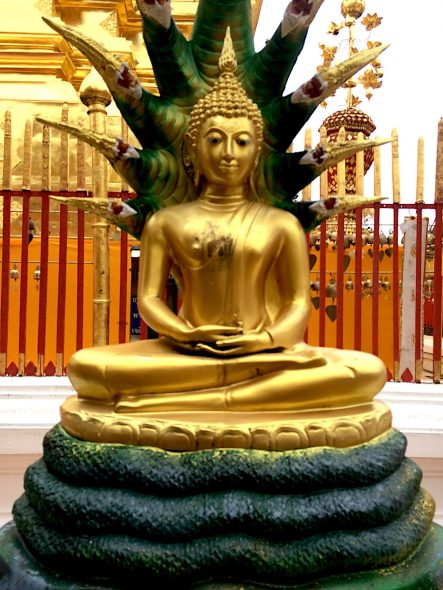 What Would Buddha Do?

The tradition of Thai massage is older than Christianity. The practice can be traced back more than 2,500 years to a medical healer from North India who was said to be the personal physician of Buddha.

The wisdom of Thai massage developed through the centuries to infuse medicine from Chinese, Indian and Southeast Asian traditions through the practice of aided stretching and applied herbs.

To experience true traditional Thai massage in Bangkok head to Wat Pho, a meandering living monastery near the Grand Palace that dates ting back to the 1700s and the reign of King Rama I. For around 400 baht or $12 you can join a short line waiting to receive an hour-long treatment by a local student in an open-air pavilion chocked with willing recipients relaxing on plastic mats and massage beds. The mood is quiet and meditative as treatment apprentices stretch limbs, bear down on muscle groups and use their weight to leverage pressure. Massage recipients wear loose clothing that can be moved around as the students apply warm, dry compresses of an ancient herb recipe containing turmeric, lemongrass, kaffir lime, camphor and tamarind.

Fully invigorated after a knot-killing Thai massage session, head to the Temple of the Reclining Buddha nearby and be inspired for further relaxation by the gilded, 150-foot-long resting body of Buddha.

For those seeking massage in Bangkok, open eyes will reveal a plethora of places to dip into for a 30-minute foot massage to a two-hour body workover. Most of these will be sidewalk storefront spaces with overstuffed chairs and clean and pleasant surroundings that charge $5-$7 for an impromptu hour of pummeling.

As an independent day spa in the middle of buzzing tourism and business district Bangkok, the Oasis Day Spa earns its name with a “secret garden” of lotus ponds and calming waterfalls flanked by twelve treatment rooms. These spaces include jungle-themed outdoor showers, deep soaking tubs and massage layout for singles and couples.

Hotels spas, however, often much more in the way of onsite amenities and atmosphere – most specifically, access to special healing chambers, pools, fitness centers, refreshments and views.

Mandara Spa at Royal Orchid Sheraton Hotel & Towers is located on the hotel’s third floor, high enough to enjoy the skyline but close enough to the banks of the Chao Praya River to enjoy views of the busy river activity. The spa features nine treatment rooms, with four double suites, three spa suites and one deluxe superior suite opening into an enclosed rooftop garden. Each spa suite includes a large private marble bath for two, a steam shower room and change room with panoramic views of the river. Afterwards, lounge at one of two pools (including a saltwater pool) overlooking the river.

Quan Spa at the Marriott Marquis

The Quan Spa at the Marriott Marquis, Bangkok’s largest hotel property with 1,360 guestrooms and suites, focuses on Thailand’s tantalizing aroma’s and scents as a theme. Seductive bouquets of ylang-ylang and frangipani are embedded into the textiles and not surprisingly, the spa’s signature treatment, the “Benja Malee Ancient Flower Remedy” combines traditional Thai techniques with the natural healing powers of flowers for a 150 minutes of sweet smelling bliss.

The Anne Semonin Spa at the Marriott Bangkok is branded by the anti-aging skin pioneer from Paris and specializes in keeping skin youthful and healthy through a range of products and treatments. Guests are interviewed and given a skin course strategy tailored to their needs. They also may choose from a menu of standard western treatments in a setting of soft metallic hues, warm lighting and orchid blooms. 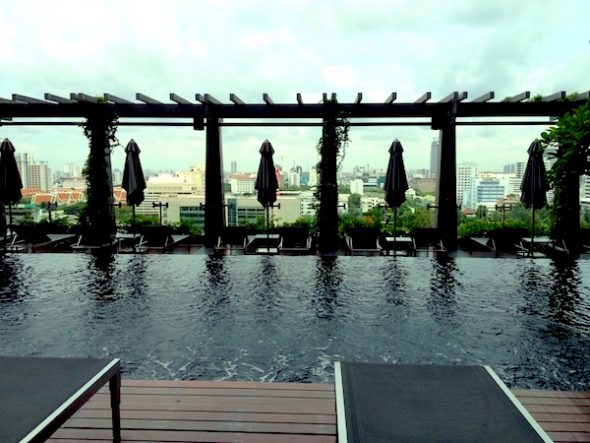 Elemis Spa at the St. Regis

St. Regis attracts celebrities and Thai glitterati that love the St. Regis Bar on the 12th floor overlooking the horse races at the Royal Bangkok Sports Club. Its Elemis Spa, entered on the 15th floor, spreads over two stories and also offers an eyeful of the city that can be enjoyed in complete calm. But the spa is not without its own sumptuous interior “wows.” Set amid 16 treatment areas find the Rasul room, chambers that could be set in a tale of Aladdin where guests are slathered in healing muds as they percolate in heat and steam and cleanse through sensual exfoliations and massages. They rinse off in showers offering selections in water pressures, lighting and music. A wading pool where guests enjoy reflexology foot rituals often starts a treatment. Most guests end their sessions by relaxing in suspended opium beds that overlook the city, or by the pool accessed on the 15th floor. The Elemis brand is headquartered in Great Britain and its products are sold all over the world.